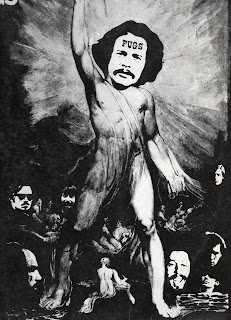 Excellent write-up. I bought this record in 10th grade in 1980 at the mall record store and then proceeded to become a commie juvenile delinquent. It remains today one of my favorite records because it is so consistently funny.

Do you love Coca-Cola or Pepsi?
ANSWER THE POLL and you could receive a prepaid VISA gift card!

Golden Filth was in my record collection and a personal favorite when I left for my freshman year at U of Penn in 1970. After playing GF for some of my dorm-mates I became somewhat of a minor hero on that floor for simply owning something so outrageous. Most of those guys had no idea such music had been made and were highly amazed and entertaining. Although I have most of what the Fugs recorded GF is probably my favorite Fugs LP for its very funny songs and sheer audacity. The multi-talented Ed Sanders does some classic between song raps that show he could have had a career as a stand up comedian. Tuli Kupferberg offers one of his best version of the classic NOTHING and Ken Weaver shows off his great voice. Everyone with open minds needs to hear this album.