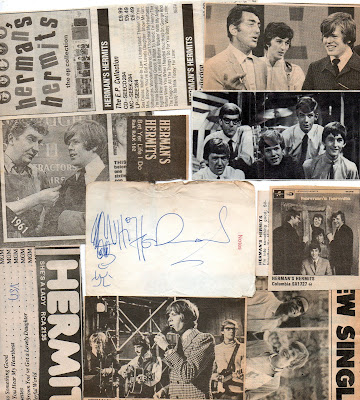 DVD Review of:
HERMAN’S HERMITS:
LISTEN PEOPLE 1964 – 1969
(2009 – 120 minutes – Reelin’ In The Years Productions)
www.the-britishinvasion.com
& www.reelinintheyears.com
Sobering thought now that while Velvet Underground were sneaking out their paradigm-shifting debut album virtually unnoticed, one of the biggest bands in the world was this toothsome quintet from Manchester. As the Beatles and Stones matured upwards Hermania slotted in neatly beneath them soaking up all that unbridled undiluted ‘Teenbeat’ training-bra pubertal-adulation. With a respectable string of UK hits Peter Noone cracked it even bigger in the States where his fun-caricatured English charm took the charts to the bank. This DVD tells the story, through new interviews with Herman, Karl Green (bass) and Keith Hopwood (rhythm) and full original performance-film of no less than twenty-two hits.
Peter Noone had launched into show-biz as Len Fairclough’s son in ‘Coronation Street’, then fronted Peter Novack & The Heartbeats. An astute Mickie Most signed them up ‘on the strength of Herman’s face’, rejigged and renamed the line-up, with Barry ‘Bean’ Whitwam on drums, and bespectacled Leeds-born Derek ‘Lek’ Leckenby on lead (he died 4 June 1994, aged 51). The DVD opens with the Hermits at the Cavern doing “Fortune Teller”, which decades later would be done by Robert Plant & Alison Krause. In retrospect, Herman generously concedes that a group is more than just the singer, it is ‘an accumulation of things’. One of those things was producer Most who ‘heard the end product complete in his head’ before they’d even begun recording it. He brought them Earl Jean’s American single of Goffin & King’s “I’m Into Something Good”, an immediate first no.1 for them. A sequence shows the group in the studio with Most conducting them through “If You’re Thinking What I’m Thinking”, closing by telling them ‘right, come and get your money!’ Other vital elements in the Hermit’s discography include regular session players such as Jimmy Page and John-Paul Jones. As the hits gained momentum, they benefited from the cream of sixties writers too. Carter & Lewis for “Can’t You Hear My Heartbeat” – an American no.3 unissued in the UK, Graham Gouldman for “Listen People” and the northern kitchen-sink epic “No Milk Today” (with a John-Paul Jones arrangement), Ray Davies for “Dandy” – Mickie Most apparently turned down “Dedicated Follower Of Fashion” on the group’s behalf, then PF Sloan turned up for their first New York sessions at the RCA studios, and sat in on guitar as they recorded his “A Must To Avoid”. Things began to get seriously silly when they took half-an-hour out to record “Mrs Brown You’ve Got A Lovely Daughter” as a last-minute novelty album-filler, and it topped the American charts, ‘people bought that stuff in those days’ shrugs Herman dismissively. They revived and accelerated Sam Cooke’s “Wonderful World”, and if no-one bought into the fantasy of Sam Cooke as a school-student, they could believe Herman was. It all comes into perspective when they appeared on the ‘NME Poll Winners Concert’ stage, with Keith Moon’s drumkit standing behind them, anticipating an altogether more explosive next set.
Some time around late-1967, within the time-span of this DVD, I was staying in Herne Bay – where my father was living with his wife, Stella. I walked into the lounge bar of ‘The Royal St George’ to find tousle-haired Peter Noone playing darts there in his small-check high-collar jacket. Herman was never – how to phrase this tactfully?, the coolest of Pop stars. But I managed to tell him I quite liked “You Won’t Be Leaving”, largely due to its vaguely sensual ‘the candlelight throws shadows of your figure on the ceiling’, which he now confides wasn’t the biggest of his hits due to BBC disapproval over the seductive suggestion of her staying the night. Tut, Tut. He obligingly chatted, signed me an autograph, before returning to his interrupted darts game. Turns out he’d bought the twenty-bedroom hotel from royalties, for his parents. They drove it into bankruptcy within two years after getting through some £23,000, a lot of money, worth more then than it is now. There was never any plan with Herman’s Hermits, beyond having a hit record, then having another one. They were a young, fun group which no-one took particularly seriously. As Herman relates, John Lennon snubbed him, and a paternalistic Keith Richards threatened to beat him up if ever he went near drugs. It was an image that denied them the ability of developing, and once their American shelf-life expired, it was pretty much over. Their final major UK hit, “My Sentimental Friend”, a No.2 in April 1969, was a song originally intended for MoR dullard Englebert Humperdinck, and you can tell, although Herman manages to invest it with a measure of plaintive charm. It closes the DVD. Later, Herman reverted to Peter Noone for his last chart appearance, in 1971, as he took neglected songwriter David Bowie’s “Oh You Pretty Thing” into visibility, a Hunky Dory thing to do (even though he whimped out by changing ‘bitch’ to the ‘Earth is a beast’)! But watching this DVD now, there’s a sneaking suspicion that when the Ramones do ‘second verse, same as the first’ in “Judy Is A Punk”, they are consciously echoing the race-memory of Herman’s “I’m Henry The Eighth I Am” – the Hermits daft take on Harry Champion’s turn-of-the-century music-hall turn, even if they’d retrieved it from Joe Brown’s version. All enjoyably light-weight disposable Pop. Yes, but it’s still here.
Posted by Andrew Darlington at 17:05