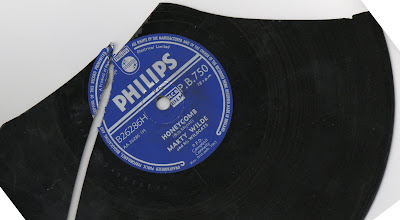 Impressions of an evening with MARTY WILDE
Live at ‘The Embassy Centre’, Skegness


A blur of 1950’s Radio voices fading in through the speakers. Ghosts lost in time, swarming frequencies jostling and colliding into each other through imaginary tunings. Jimmy Edwards. ‘Music While You Work’. Radio Luxembourg. Jimmy Clitheroe. ‘Top Of The Form’. The BBC Light Programme… then come the quiffed glaciers of Brylcremed slick-overs jolting this most somnambulistic of decades out of neutral! With Marty Wilde there at its British inception! He’s tall. He was always tall. A full 6’3”. His presence dominates the stage tonight. “Born To Rock ‘n’ Roll” is a semi-autobiographical song that defines the life, and the show’s theme. But there were other pre-Rock influences at work as a young Reginald Smith hit adolescence in those first years of post-War England. The macho western songs of Frankie Laine. As ‘Marty Wilde’, Reg would later have a hit with his rocked-up version of Laine’s “Jezabel” recorded as a deliberate reference. Then – unlikely though it now seems, there was high-kicking Frankie Vaughan. A superstar in his day. And the smoothly swinging Deano Martin. “Volare” is on the chart as Marty himself makes his debut foray up the lists with his doomily macabre “Endless Sleep” in August 1958. Critic Jon Savage says it ‘totally kicked ass… a monster guitar riff, a fantastically quivering vocal, and ambient back-up murmurs all add up to a classic of teenage melodrama’ (‘Mojo’).


But it all really begins with Elvis. He is the ‘guiding light’. Under the age of legal consent, it’s his parents who have to sign on the line when the Man With The Big Cigar – Larry Parnes‘-Shillings-&-Pence’ comes to call, at least – that’s how he tells the story. ‘I think Lionel Bart saw me (perform at ‘The Two I’s’ coffee-bar). I will never truly know, because nobody actually came forward to me. No-one approached me at all, and I went home on the Saturday. I had finished my work there, and the following Sunday it was mind-boggling to come home from Sunday-school – which I did, believe it or not, and there was a chap at my house with a contract with my name on – which was quite incredible. And it was Larry Parnes, the world’s biggest manager in my eyes. He still is. The most incredible signing-up process...’ And although the hits don’t start immediately (I still have a 78rpm copy of his version of Bob Merrills’ “Honeycomb” b/w the Marty Wilde & Lionel Bart song “Wild Cat” on Philips PB750), when they do come they happen huge. Marty Wilde is the face of 1958. The first face of ‘Oh Boy’. Jack Good, who knew Marty when they worked together on ‘6:5 Special’, introduced him to Jody Reynold’s “Endless Sleep”, the dark suicide drama which became Marty’s debut Top.5 hit. Stolen, but then if Marty hadn’t taken it, it would probably never have been heard here anyway. It was on the chart the week the ‘Oh Boy’ show began. He sang Leiber-&-Stoller’s “Baby I Don’t Care”, Ricky Nelson’s “Poor Little Fool” and Buddy Knox’s “Somebody Touched Me” on that very first show. Tonight, he talks about Jack Good’s spontaneous direction technique – ‘one take, learn the words, hit the mark’ (and later ‘he was our guru, he could see things in us we couldn’t see in ourselves’). And he sings Bobby Darin’s interpretation of Brecht / Weill’s “Mack The Knife” pretty much as he once did on those long-ago monochrome Saturday nights.

Marty was there on the thirty-eighth, and final ‘Oh Boy’ broadcast 30th May 1959, closing the show by duetting the Cliff Richard. He jokes about another of that show’s vital ingredients, Joe Brown. Joe Brown jokes about him too. It’s a long-standing association. They’re both survivors. Both still here, both still doing it. On another occasion, in conversation with Joe, I recalled how Marty had dominated British Rock ‘n’ Roll for some eighteen months, but that when he watched Cliff Richard debuting on ‘Oh Boy’ he must have realised that status was over. ‘I don’t think that’s true, actually,’ argues Joe. ‘I just think it went off in a different direction. I mean, I’d have thought that Marty would’ve made a great actor. We did a film together once, called ‘What A Crazy World’, and he was good in it. I thought he was great in it. But no – Marty’s a good bloke. He’s got the heart… and everything.’ That movie opens with Marty (as hoodlum Herbie) shoplifting from the local street-market. Still a ‘bad boy’, the man behind the counter swears “bleeding kids!” Later, as a record company executive in the David Essex movie ‘Stardust’ he gets to yell ‘are you listening… hey?’ to a dumbstruck Keith Moon. Not many managed that feat. Marty did.

Marty does a Rock ‘n’ Roll medley of full-fat high-caffeine non-organic maximum-strength beats, all the while ranging to both wings of the stage, an oddly compelling presence. Still. One that physically embodies the latent power of the music, revelling in the reactions he’s provoking. He sweats. He gyrates effectively with gently self-mocking asides, sharing each part of the experience with his audience – from the undeniable joy, to the inevitable song’s-end breathlessless. Drawing them in. They shared this when it was new, “so free and so wild / and so full of living”. They share it again now. A self-contained time-capsule poignantly defiant against the years. ‘Film Fun’ magazine dated 23rd January 1960 offered its readers fabulous ‘Free-Gift 3D Spectacles, with a 3D Gift Book to view them with. It features photos of Alma Cogan, radio ventriloquist Peter Brough and his mischievous dummy ‘Archie Andrews’. And Marty Wilde. Now the gold lame comes off. He’s engagingly self-deprecating about his own version of “Rubber Ball” in its chart-battle with Bobby Vee’s U.S. original. But it’s an Orlowski-&-Schroeder song open to artistic interpretation. Who’s to say which is the better? Marty did manage to invest it with an intensity beneath its bubble-gum sugar-coating. And Bobby Vee does tell an amusing story-line about it in his own live show as well (about how it wound up as a TV-ad – ‘my bouncy-bouncy!!!’).

But then, once things take a dive career-wise Marty finds himself able to concentrate on writing his own songs. Buddy Holly showed him the way. Now he does “Peggy Sue Got Married” with the Wildcats providing perfect sound-alike back-up. His own first self-penned hit – “Bad Boy”, happens by accident. He relates how the intended ‘A’-side – “It’s Been Nice”, gets downgraded imperfect for ‘technical reasons’, and the dark blue Philips-label disc is fortuitously flipped to provide one of Marty’s most enduring hits. ‘Well you see now, I got a girl, and we stay out late, almost ev’ry night, / the people just stare and they declare ‘well, well – it just ain’t right’’. He jokes about how daughter Kim laughs at its moral naivette. But this was real. This was December 1959. It was like that then. Until – writing through a pseudonym-of-convenience, in league with lyricist Ronnie Scott, he’s well into a second career scoring chart-hits for a new generation of bands – and to audiences, who’d have sneered had they known. Giving him great satisfaction to watch those bands in their hippie regalia on all those ‘Top Of The Pops’ shows performing the songs he’s written. He does one of the biggest – “Jesamine”. A massive ‘butterfly-child’ hit for the Casuals. He does it with impressive tenderness. He also did several songs for Status Quo’s first album, “Elizabeth Dreams”, “Paradise Flats” – and their second Top Ten entry “Ice In The Sun”. And Lulu. Long before she discovered Take That or Ronan Keating she was benefiting from her association with this Marty Wilde, performing here tonight in Skegness.

Posted by Andrew Darlington at 18:00