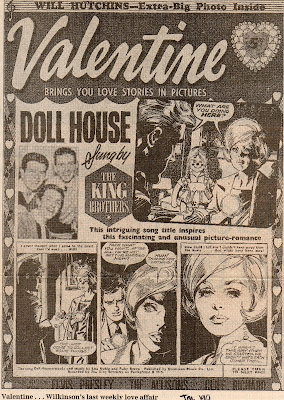 My parents were the subject of "Living Love Stories " in Valentine Magazine issue 16.11.57. Joan and Norrie Paramor. Do you know if there is any way that I would be able to obtain a copy of this?
Carrie Ledingham (nee Paramor)

Searching for the Ultimate Dating Website? Join and find your perfect match.

Order a Sparkling White Smiles Custom Teeth Whitening System online and get BIG DISCOUNTS!
* 10 shades whiter in days!
* Professional Results Guaranteed.
* As good as your dentist, for a fraction of the cost.
* Same Teeth Whitening Gel as dentists use.

Have the Valentine publications been reprinted and compiled in book form ?

eToro is the ultimate forex broker for novice and advanced traders.

It's unbeliavable the lack of interest of the author in the most esencial part of those girl's comics: The fabulous art accompanying the stories. A new style never tried before by the British comic artist who till the end of the years 50 illustrated those and other comics in Great Britain. Their style was something out of the past that needed an urgent changue of style, like the very important changes in social life that during that time systematically kept arriving in public life.
It was in 1958 when editor José Toutain, head of the Barcelona agency Selecciones Ilustradas, arrived in London to meet with stablished editors of the UK most prominent publications publishing houses, like Fleetway, were Mike Butterfield, the editor of the girls comics. The examples Toutain he had with him to show the new potential customers left nearly everyone astonished. What they saw there was unprecedental and totally new; the drawings, all made by Spanish artists, will from that moment on inundate the British comic world (girls and boys).
Indeed 'Badia' was one of the circa 60 Spanish comic artists that for the next 10 years would be week after week showing the British public how breathtaking and influential in their look the new art style (the Spanish style) would be.
There are out there some books (american and Spanish) about the artistic phenomenon of the Spanish Style where this particular time in British comic history is referred.
Noni