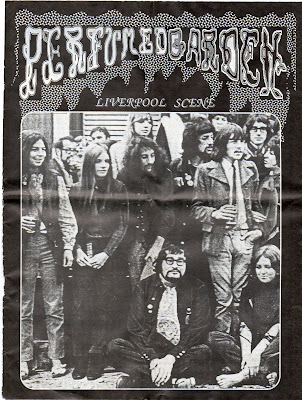 ‘HEIRLOOM’ by LIVERPOOL SCENE (RCA SF 8134, October 1970), released post break-up consisting of material recorded between September 1968 and January 1970, including Adrian Henri’s “Love Is”
‘RECOLLECTIONS’ by LIVERPOOL SCENE (Charisma CS3, October 1972) Double album compilation made up from the first two group albums. Chris Welch in ‘Melody Maker’ said ‘in retrospect Liverpool Scene could only have existed when it did. Before would have been too soon. Now would be too late… don’t forget them, we’ll ne’er see their like again’
‘THE LIVERPOOL SCENE FEATURING ADRIAN HENRI & ANDY ROBERTS’ by LIVERPOOL SCENE (Polydor 2310055, 1972), a Best-of compilation also drawing on Andy Roberts solo projects
‘AMAZING ADVENTURES OF LIVERPOOL SCENE’ by LIVERPOOL SCENE (Esoteric ECLEC22138), a Best-of 2CD compilation including previously unreleased live, and digitally remastered material
‘LIVERPOOL SCENE: AMAZING ADVENTURES OF LIVERPOOL SCENE’ + ‘BREAD ON THE NIGHT’ by LIVERPOOL SCENE (issued as expanded double-CD with bonus material, Beat Goes On BGO CD538, 2001) In ‘It’ Roger Mortimore wrote ‘they booze and screw and talk like ordinary layabouts. But they also work at their thing. They don’t waste time. Or if they do, they write about it’
‘HOME GROWN’ by ANDY ROBERTS (RCA SF 8086, March 1970 with lyrics printed on the sleeve, reissued on B&C Records CAS1034, 1971 with slightly amended listing and some re-recorded tracks, ten tracks including “Just For The Record”, “Applecross”, “John The Revelator”, “Moths & Lizards In Detroit”, “Creepy John”, “Gig Song”, “Queen Of The Moonlight World”, and “The One-Armed Boatman & The Giant Squid” with added “Lonely In The Crowd”, features Gerry Conway, Mac & Kissy Kissoon, Carol Grimes, Ray Warleigh. ‘Melody Maker’ said ‘it’s country, it’s delightful, it’s good’ (issued on CD by Strange Days WAS104, 2007)
‘MIKE HART BLEEDS’ by MIKE HART (Dandelion, Cherry Red expanded-CD 2008), includes “Son, Son”
‘NINA & THE DREAM TREE’ by ANDY ROBERTS (Pegasus PEG5, 1971, CD Strange Days Records WAS1042, 2007), includes “Keep My Children Warm” and “Nina”. Promoted by a tour supporting Steeleye Span. Andy also plays ‘string organ’ on Cat Stevens’ ‘Teaser And The Firecat’ album (1971)
‘EVERYONE’ by ANDY ROBERTS (February 1971, B&C CAS1028, reissued as Polydor LD2310068 with amended listing including Neil Young’s “Cowgirl In the Sand”), from Andy’s short-lived ‘ill-fated attempt to form a band with Bob Sargeant’ (organ), Dave Richards ex-PC Kent on bass, John Porter guitar, & John Pearson (drums), seven tracks, three by Andy Roberts, three by Sargeant, with “Trouble At The Mill”, “Sad”, “Midnight Shift”, “Don’t Get Me Wrong”, “Sittin’ On A Rock”, “Too Much The Loser”, “Radio Lady” & “This Way Up”, ‘NME’ said ‘for some unknown reason which only Andy can reveal, he has chosen to submerge himself within the context of this band, so that his individuality is somewhat obscured. This is a pity for he has a great deal to offer… more than this particular album demonstrates’
‘BASHER, CHALKY, PONGO & ME’ by MIKE HART (Dandelion, October 1972), issued through his ‘Mike Hart & Comrades’ group name. Later, both Mike Hart LP’s combined onto See For Miles SEECD419, 1995
‘URBAN COWBOY’ by ANDY ROBERTS (Elektra K42139, June 1973), solo guitar with low-key rhythm-section (Timi Donald’s drums & Dave Richards’ bass) and Andy fresh from Grimms. Ian Matthews adds back-up, while the track-list includes “All Around My Grandmother’s Floor” which was co-written with Mike Evans, “Elaine” with Richard Thompson’s guitar, “Big City Tension”, “Richmond” recalling ‘Jeff (Beck) on stage with the Tridents’, and single “Baby Baby” with Martin Carthy on banjo and Zoot Money backing vocals – ‘a strangely compelling sound that should take it into the charts’ said ‘Melody Maker’. It didn’t!
‘ANDY ROBERTS & THE GREAT STAMPEDE’ by ANDY ROBERTS (Elektra K42151, December 1973, also available on cartridge!), includes single “(53 Miles From) Spanish Town” (K12127), features musicians BJ Cole and Gerry Conway. Sleeve shows a US small-town street-scene with ‘Nicholson’s Wonder Store & Bar’
‘ANDY ROBERTS’ by ANDY ROBERTS (Charisma CS6, March 1973), compilation drawing on Liverpool Scene material as well as solo albums, his stint with Plainsong (producing the fine ‘In Search Of Amelia Earhart’ album), and a few tracks from Everyone. Cuts include “The Raven” and equally satiric “Goodtime Charlie”
‘CHARIVAR’ by ADRIAN HENRI (limited edition LP, 1974), recorded live at the ‘Liverpool Academy Of Arts Gallery’, with “Scenes From The Permissive Society”, “Butterfly”, “Mrs Albion, You’ve Got A Lovely Daughter” and “Liverpool Poems”
‘FROM TIME TO TIME’ by ANDY ROBERTS (Big Ben Records, 1985, re-issued on CD as ‘BEST OF ANDY ROBERTS’ on Mooncrest CRESTCD014, 1992)
‘ANDY ROBERTS: JUST FOR THE RECORD 1969-1976’ by ANDY ROBERTS (Sanctuary CMEDD1084, 2006) 2CD-set includes digitally remixed tracks from ‘Home Grown’ and beyond
www.andyrobertsmusic.com
Posted by Andrew Darlington at 21:35

Many thanks for the most extensive piece on THE LIVERPOOL SCENE ever likely to grace the web.

Did you know you can create short links with Shortest and make dollars from every visit to your short links.

If you want your ex-girlfriend or ex-boyfriend to come crawling back to you on their knees (no matter why you broke up) you need to watch this video
right away...

It's been said that every bettor needs to look at this,

eToro is the ultimate forex broker for new and pro traders.

Hello friends,I am ALISHA ROSS, This is my testimony on how my ex lover come back to me..i want to say a very big thanks and appreciation to ZUMA ZUK solution home for bringing back my lover who left me for almost 2 year,i feel like my life is completely over, so one day as i was searching on the internet for recommend spell caster who will help me to bring my lover back, Finally i met a writing how so many testimony talking about how ZUMA ZUK help to restore relationship back,so i decided to give it a try so i contacted the spell caster called ZUMA ZUK and explain my problems to him,and he cast spell love spell luckily within 24 hours my lover really called me and started apologizing for all he had caused me.and be begging me to accept him back and will are living together and happily married, I am the happiest woman on earth today because ZUMA ZUK has done a wonderful deeds in my life and i will continue to share this testimony, i pray God almighty give you the strength and wisdom to help more people having similar problem like mine, contact him. Email spiritualherbalisthealing@gmail.com Call or Whats App +15068001647