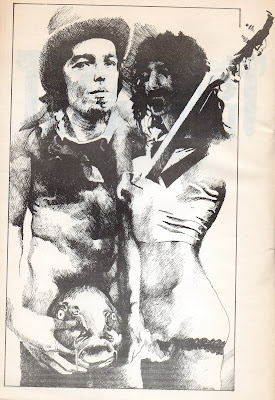 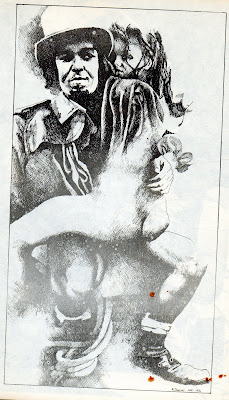 THE CONTAGIOUS
CORRUPTIONS
OF
DON VAN VLIET
(CAPTAIN BEEFHEART AT
‘UNITY HALL’, WAKEFIELD)
Event Inputs: 16th November 1980
The Captain drinks Perrier water
during savage copulations of the moon
inspires horizontal illogics that slither
feral in conceptual proliferation.
He farts in ‘B’ to the sound of
falling piano’s, fractured public image of
spasmic-vomiting honks, and howling wolf
lunar-light fucks, vowels furtive,
slinking razor-cuts fearing immolation
of blood, until teeth ache with amplification pulse,
and Pentax-lenses claw detail-precision cuts,
slicing noise into neat permanences.
Such rationalisation is obscene.
Moondog bassman hair bubbles in
cartoon thoughts of huge exclamation marks,
a maze of Assyrian equations, a tangle
of limbs in dark sequential frames,
a jugular discord sucking in the circular
terror of drowning in exhalations
of Perrier moisture. Spurt by spurt.
The Captain hurtles at impact,
comes through splintered
but idiot-dribbling wise…


Don Van Vliet (15th January 1941 – 17 December 2010) doesn’t much like Punk. At least, not this night he doesn’t. Throughout the performance he snipes barbed scorn at what was then-happening in music. Which is disappointing, in a way. You’d imagine he’d recognise a certain congruence of strategy between what he was doing, and at least the provocative mischief that lay at the roots of Punk. Particularly as ‘Doc At The Radar Station’ – the album he was promoting, is his most raw and abrasive in a while, with stunning onstage attacks of “Run Paint Run Run”, “A Carrot Is As Close As A Rabbit Gets To A Diamond” and “Making Love To A Vampire With A Monkey On My Knee”. But ‘hippie music’ was suddenly uncool, and the tour was poorly attended as a result, which is probably more what his vile bile is about. The guitarist mentioned is long-term Magic Bander Jeff Moris Tepper. Beefheart wears voluminous white pants with immense baggy pockets crammed lumpily with mysterious artefacts. From the depths of his pockets he produces felt-tips, and sketches surreal cartoons which he passes out to people in the audience… unfortunately, I’m not swift enough to snatch one. Damn! It would’ve made legendary cover-art for my ‘zine…!

Rememebr struggling to get there from Hull where I was a student. Cancelled trains, replacement bus services, and didn't really have much of an idea where Wakefield was. He took offence at something (people shouting for Zoot Horn Rollo?) and disappeared for a while. Then came back with a banana - "I eat bananas but I ain't no ape". A great night, great man. Is there a bootleg of this anywhere? Andy L.

I was there! I remember him saying your are all "itty bitty test tubes in a centrifuge" - yes he got pissed at one point. I was wearing a firefighters heat helmet a bit like a space suit helmet we found it in an army surplus store in Leeds. Best gig of my life!!!