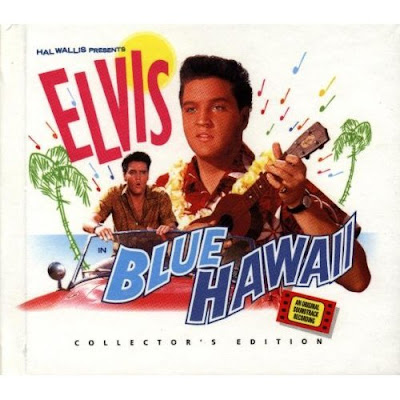 'ELVIS PRESLEY &
THE BEACH-BOY BLUES'
‘Ecstatic Romance! Exotic Dances!
Exciting Music! In The World’s
Lushest Paradise Of Song!’
There are two perspectives you can use to look at ‘Blue Hawaii’. The first is as it must have appeared at the time of its release, in relation to what had come earlier. The other is with hindsight, knowing what would come later. Both perspectives are useful. Elvis had a tendency to complacency. With good reason. When he felt challenged, when he felt his status was threatened, he was well-capable of retaliating with work of extraordinary intensity. As with his so-called ‘67 Comeback TV Special’, launched when his career was at its lowest post-Beatles ebb, and designed to vindicate his intensity as a live performer. Problem was that for much of his career his position as the planet’s biggest music-star remained unchallenged. Whatever slapdash dross he chose to inflict sold just as many copies as his best and most groundbreaking work. The unquestioning loyalty of the fans who bought up everything with his name on it meant he had no real incentive to try harder. And because he didn’t have to try, he didn’t try….
Full review and background history of Elvis Presley: ‘BLUE HAWAII’
Go to:
www.videovista.net/reviews/nov11/bluehawi.html
Posted by Andrew Darlington at 16:52

I have just installed iStripper, so I can have the best virtual strippers on my taskbar.