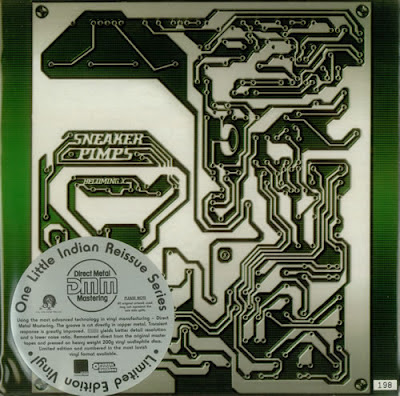 ‘POST-MODERN SLEAZERAMA...!’
SNEAKER PIMPS (and friends)
at Temple Newsam Park, Leeds
What really spooks me is that between the Saturday and the Sunday night sessions, the giant inflatable octopus suspended from the ceiling has moved! I mean, that’s some heavy heavy paranormal vibe going down there. Meanwhile there’s Olive, an unstoppable dance machine in her little black dress, her cool horn, cooler vibes, and rapid dubwise rhythms. And between “Curious” and “Outlaw” she addresses her tribe. ‘I wanna see you dancing. You’re dancing like bags of SHITE!!!’ Sneaker Pimps say less. In fact they say nothing at all except ‘P.M.S.’ as an abbreviated introduction to “Post-Modern Sleaze”. But with Kelli Dayton in spray-on pants and bra beneath flash-frame film of the grim android gunfighter aka Yul Brynner in ‘Westworld’, they don’t need to. They’re in love with your confusion. Theirs are fully-chromed high-impact drones, glacial sounds with a low-end rumble that might say Nada, Nothing, but says it with an immaculate sheen of electronic nihilism. It’s got snap, crackle, and sometimes Pop too. But never ask the Press Officer. He’ll only spiel you platitudes. Never ask the Record Company either. They only give you the party line. If you want the real insight, dear reader, ask your feet. And tonight, in the ultra-stimulation of these alchemists of beat, we’re coming over all knee-trembly
‘It’s great to be back in fucking England’ says MC Maxim through dark bass detonations and deeply-dim lighting. ‘In America they don’t know shit. And it’s on their doorstep.’ Does he speak with forked tongue? No, tonight, it’s here on our doorstep. They’re going Prodigy? Sex Pistols via Mothercare, says Barbara Ellen. And hey, I knew Keith when he was normal. Before he smacked bitches and fire-started. And Monaco? A Low-Tar New Order. While all around them the Dance Tent is a giant sweatbox of rhythms, its skin wrinkling above your head like the inside of a giant scrotum. You have to dodge Security cordons intent on keeping you out, such is the maximum compression of pressed flesh drenched in blizzards of volume, lights and film for the gargantuan grooves of the Chemical Brothers, or at least the single glimpsed Chem-Brother visible through the punishment deck of magic mist, sweat vapour and heads. It’s banging. Sorted. Mental. Wicked. And all those other phrases so loved by ‘E’-outcasts.
The screens pulse scary cinematic steals. ‘CHEMICAL IMBALANCE’. Then ‘STABILITY RESTORED’. While Sneaker Pimps extend faster and further than a lizard’s tongue around long shadows of smooth bass-heavy skank and dark therapies of smart alecky minimal rhythm. Slow-burning. Like dropping a lazer-gun down your Kelvin Cliens. They gather momentum towards “Spin Spin Sugar” using as diverse samples as Britt Ecklund’s Wide-Screen sobbing spliced into Luciano Berio’s “Visage”, and “Six Underground” with its oblique descending chords moving at ludicrously spaced juxtaposition to the rest of the song. Coming up out of the alien blueprints for the Subterranean Dance once called Trip-Hop it took a remixed, rebranded, reconstructed, and Movie-soundtracked (sampled from James Bond’s ‘Goldfinger’) re-issue for it to eventually go Top Ten. But with Kelli’s disconcerting way of suddenly putting scary angles on the sound, sticking her oar in, while at the same time prompting, steering, and correcting the narrative course of Liam Howe’s vintage analogue synths and Chris Corner’s guitar, tonight it sounds freshly minted. There’s a rumour they’re going to do their radical Folk rework of “Firestarter”. They don’t. They don’t need to.
If modern dance is dog eat dog (at £28.50 a day ticket), just for tonight, it’s Bon Appetite! While the inflatable octopus on the ceiling watches. And it moves – I SWEAR it fucking moves!
Posted by Andrew Darlington at 15:00