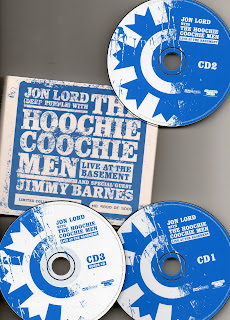 Away from his day-job with leaden metallurgists Deep Purple, Jon Lord has always enjoyed a lively alternate musicianly time-line. This Hoochie-Coochie Men has nothing to do with Long John Baldry’s band of the same name, they’re an Australian Blues group Jon hooked up with during injury-time taken out from his 2003 ‘Concerto For Group And Orchestra’ appearance schedule at the Sydney Opera House. A bonus CD documents the process of their coming together and rehearsing, before recording the main set live in the intimate setting of the Sydney ‘Basement’ Club. In some ways this extracurricular indulgence represents a comfortable easing back into the sixties default setting of Jon’s Artwoods days, or even before. He amusingly recounts how he played “Green Onions” as part of his first ever professional engagement, as part of a group called Redd Bludd filling in for a no-show Manfred Mann, his smooth Hammond now feeding classy prog improvisations to add artistry to its craftsmanship. The blues flows like it’s second nature, with a samba-paced “Strange Brew”, and a mean straight-razored take on Johnny Winter’s “Dallas”. There’s Howlin Wolf, Elmore James and Muddy Waters songs, but they focus around a run of three stand-out Willie Dixon covers, stealing “You Need Love” back from Led Zep’s creative kleptomania. For Deep Purple metallurgists there’s even a ‘singles edit’ of their “When A Blind-Man Cries” to round off this accomplished and highly enjoyable performance.