Check out this review on 'SOUNDCHECKS'... 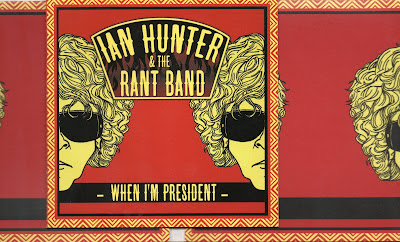 ‘Ello’, Mr ‘Unter positions himself between Mitt Romney and Barack Obama in the run-up to the White House, and states his manifesto in no uncertain terms. It’s a mighty long way down Rock ‘n’ Roll from his Mott The Hoople hit-making days, but Ian Hunter’s twentieth album still carries the distinctive charge of his finest work. He was part of the first postmodern Rockists. Steeped in Rock ‘n’ Roll so it’s rhythms and references come as naturally as breathing. Ignited by 1950’s Rockabilly, sharpened by 1960’s R&B grit, topped off with 1970’s mix-and-match sensibility, it’s achieved its own timelessness, folding in slight quotes and nods to what had come before without effort, almost without pre-thought. It is his first language, his vocabulary of choice. Both fan and practitioner he was always one of its finest chroniclers. He’s always stayed true to his calling, and seldom strays from its poles. But if anyone captures the sheer essence of the Rock ‘n’ Roll life better than “All The Way From Memphis” or “Once Bitten, Twice Shy” I’ve yet to hear them... Read the full review at:


http://www.soundchecks.co.uk/reviews/ianhunt1.html
Posted by Andrew Darlington at 18:50