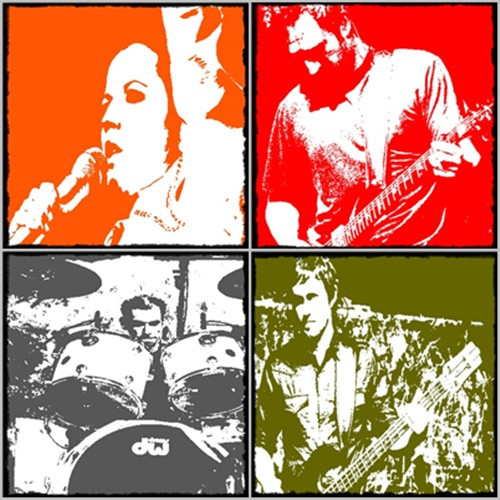 GIG REVIEW OF:
THE CRANBERRIES
and PJ BERRY
at THE IRISH CENTRE, Leeds (1993)

Somewhere between... I think, “Liar” and “Linger”, Dolores O’Riordan lifts her lager, dabbles fingers into it, and delicately dribbles piss-clear liquid over her brow like it’s designer cologne. As the intensity builds, she not so much sweats, or even perspires... more glows. She says ‘Hello’ in Gaelic, and ‘Thanks a million’ with Limerick in each syllable. We arrive late – mid-way through P.J. Berry’s solo ‘Nintendo-Neil Young’ thrash, fighting for bar and floor-space. It’s not until the lights go up that P.J. sees the chaotic audience he’s been playing to, and yells ‘god, but you’re UGLY!’ Then Roadies with collapsed Brian May perms tune and pose with guitars others will play. Set out lager and towels others will use, as REM swirls around them. One T-shirt reads ‘WELL ‘ARD’ – which looks to be inviting trouble (‘So yer think yer ‘ard DO YA!?!?). It would be great one night to review the Roadies and ignore the band. But not this night. Not this band.

Cram the Sundays through an intensive 4AD back-catalogue, and Cranberries are glittering silver-lined vocals spun out on the phased scintillations of Noel Hogan’s Rickenbacker, as rich as cascading fractels. They’re on the brink of charting their single “Linger”, but start slow and tasteful with “Pretty”, building through “Sunday”, gaining momentum. For each song is a page from a dot-to-dot book that grows from small clues into a total picture. Each song the seismic tick that foretells the earth tremor. Dolores wears a formal little black number, low-cut and short. Worn with boots. Her black hair razored high over a nest of near-fetishistic ear-rings. She doesn’t move too much, although she loosens up as dot meets dot, draping the mike in various pensive and impassioned poses as the laser-wire guitar high-pressure points burst around her. “Dreams” – last year’s single weaves hypnotically, as do the more powered sound-bites from the album (‘Everybody Else Is Doing It, So Why Can’t We?’, Island, March 1993).

‘Thanks a million’ says Dolores as she glows. She says it like she means it.
Posted by Andrew Darlington at 14:55