While this tour was still being premeditated, rehearsed, and micro-adjusted, I suggested to blonde alto-saxist Stephen Singleton that ABC work from an essentially cerebral base. He didn’t disagree. Each stage of their irresistible rise has been scrupulously thought out, and as a culmination of the year in which IT ALL HAPPENED writ large this multi-city slog is too important to allow any angle to remain uncovered. Despite some early slight imbalance on the sound mix, their pre-planning works with the precision of flying knives, and they serve up a hi-octane set of a heat-intensity that near crisps the speakers. Borne on visual flash in glitzy show-biz lavishness, with a rhythm pulse to answer every question, and sharp intelligent songs, they fly and they fly eight miles higher than you ever thought possible.

‘Unique’ is a vastly overworked adjective in Rock-crit, and usually gets related more to hair-style than to musical originality, but ABC re-invest the word with some currency value – who else unveils their set with an “Overture” spun out in ice-blue light by a sextet of girl violinists? And from that point on the ABC Molotov Cocktail is a hermetically-tight sixteen-piece organism taking the full-house assembly of uncritical devotees through a punishing extreme lexicon of hits. An elongated Funk-slanted “Tears Are Not Happy”, a blistering “4-Ever 2-Gether” with its vocoder-scrambled vocal motif, and “Valentine’s Day” with Mark White trading lead guitar for chiming repetitive xylophone figures. The songs deal in lyrical interplay and never condescend to market demands for nursery rhyme simplicity – but they programme their way through a no.1 album and a clutch of hit ‘B’-sides that everyone here already owns, so there’s little new territory. And the formula functions squeaky-clean according to blueprint, a state of constant turn-on with nowt left to chance.

There’s just one unpremeditated sourness – midway through the epic “All Of My Heart”, the lush orchestration fades dramatically to allow maximum emotional emphasis for Martin Fry to breathily emote the title – only, with a split-second timing worthy of the band itself, an audience saboteur whips in and yells it out before him, stealing the phrase! Martin – forced to merely echo the line, is audibly shook up, he hasn’t allowed for such imperfections or unplanned occurrences. I’d guess the strategic infiltration of Fry’s solo slot could also include a miscalculation, it provides some textural variation (and allows the rest of the band time to switch from black glitter jackets to gold lamé!), but his voice – perfectly mixed and matched to group compositions, sounds awkwardly unsuited to Sinatra’s “I Wish I Were In Love Again”. Fry is no natural extrovert, which means he’s forced to play his role harder, and in this instance he sounds miscast. But the best is yet to come. Cranked up to a solid wedge of sparkling hits the show peaks super-hot on perfect power, an exuberantly celebratory “Alphabet Soup”, a “Poison Arrow” delivered right on target, and an opulent “Look Of Love” that leaves the audience emotionally shredded.

Precision can be a safety harness, an over-compensation for imagined inadequacies, and this first national tour carries a hell of weight for ABC. But as the show, and the inter-city trek, grains momentum (and confidence) then that balance too will be fine-tuned. They are too meticulous, and too cerebral, to do otherwise. ABC will wilt you, permanent. They are here to stay… 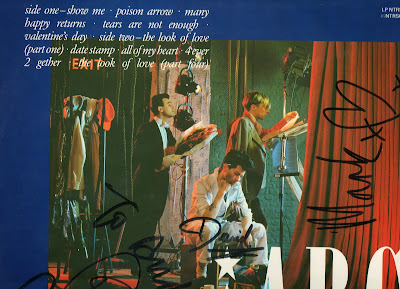 Posted by Andrew Darlington at 19:46

eToro is the #1 forex trading platform for rookie and established traders.