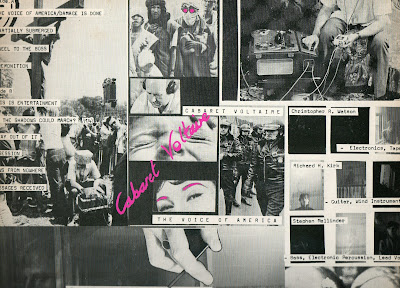 
For almost a second, something’s vaguely disturbing here. There’s a long dark hall of glass and concrete. A mass of people in the drab greys and blacks of functional industrial wear. The occasional bright burst of hair outvoted by long coats and intense expressions. Heads are uniformly up-tilted at 45-degrees, obsessively fixed on a stage stripped bare but for silver mike-stand, cluster of drums and cable coils, to where the giant video screen fast-scrambles images of Test Department’s exhortative paeans to work and sweat. From outside it’s a ritual shot-through with Fritz Lang-ian ‘Metropolis’ stills, or (yawn) Orwellian intimations of populace-programming. The unease gets dispelled as soon as it’s firmed though, by Pete Hope aggressively pamphleting a Cabaret Voltaire biography, and John Keenan leafleting the Troggs appearance at the local Bierkeller. ‘I put the Cabs on in… um – 1978, with Joy Division supporting’ he recalls conversationally, ‘they’re better in a smaller venue, more intimate.’ Perhaps you shouldn’t try for intimacy with the Cabs? Perhaps that’s not part of their scenario…?

But such disquisition gets effectively stomped on by the sheer autowreck physicality of the “Sensoria” play-in. With the two Micro-Phonies positioned around the nagging hypnotic sound-repetitions and the flickering visuals of the Cabaret Voltaire total environment syndrome. Stephen ‘Mal’ Mallinder is in a bulky flak jacket. He seems looser, almost twitch-dancing, but it remains a private ceremony in which the audience are incidental. Richard H Kirk is in leathers, feeding the synth-lines and guitar breaks with his back to the mass, in pure Bebop. This year’s physical drummer is Mark Tattersall. Spectrums run along Mal’s fret. Layers of ear-shredding electronic sound builds and ebbs, ducks and weaves, attacks and decays on a loose-time schedule. Voice emerges through it in tantalising fragments. Song-titles are punctuations denoting rhythmic shifts.

There are very obvious developments of the strategy first fielded on last year’s ‘The Crackdown’ album (August 1983), and even if “Sensoria” IS their most cunningly assembled single-shot to date, it still segments seamlessly and effortlessly into what the band was always about. Extending and over-extending timelessly to the very edge of ad nauseam. A digital mantra. An alchemical chant aimed at the post-Machine Age, not the charts for the Teen-Age. The rhythms this time seem more pure, more stark and emphatic, more total, like they’re stealth-borrowing some of the brutal primitivism (but none of the methodology) from the metal-bashing avant garde. And even the rapid-run video cut-ups behind them are more austere – no sex or cartoons now, just hard industrial shots and totalitarian footage.

On the screen they’re peeling a face back from a skull. It’s “Just Fascination” circling and pulsing. Hitler’s caught in a time-loop. Mao Zedong (Tse-Tung) smiles beatifically. Hitler/ Mao/ Mussolini/ Thatcher/ Kennedy – the cult of personality is contrasted with the Cab’s cult of un-personality. With the figures on stage reduced down to near silhouettes against the screen. And their sound to part of a huge process of sounds. They use faces like Warhol silk-screens faces, reducing them down and pointing them up as the mere brain-furniture they are. Media spawn pouring with the fast-forward permanently depressed. Kennedy, Thatcher, Mussolini. Mark pores studiously over congas, drum-kit and snares, the top of his cropped-head a round ‘O’. A long autobahn shifts behind him, at warp factor ten. Massive rhythms fall hard and denser… white-noise and tape voices spray, effectively drowning out the possibility of applause between each long number, an amber light pulsing on a sound hook-in, spots breaking out across the walls and ceiling.

Why Hitler? Why swastikas and marching men? A fierce altercation in the dressing room. ‘They’re clips from Leni Riefenstahl art-movies. So you can’t say ‘they’re Nazis’, ‘cos they’re not. They’re ANTI-Nazis!’ But that’s not the point. We’re talking communications technology. We’re talking medium not message, talking Global Village, talking ‘Cult of Personality’, and that transcends the party line. Cabaret Voltaire is vivid, is stunning, is multi-sensory. Even when they’re gone and it’s obvious there’s no truck with contrived encores, the speakers still keep spitting out treated chants and noise-garbage, and the heads still stay of forty-five degrees, obsessively fixed on a stage stripped bare…

(The single “Sensoria” is taken from the album ‘Micro-Phonies’ (Some Bizarre/Virgin, November 1984). The video directed by Peter Care) 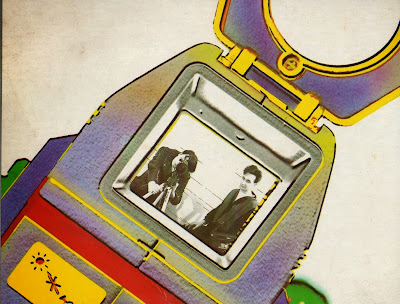 AND THEN, SOMEONE,
SOMETIMES, CRACKSDOWN!!!


Pete Hope, singist with Box, sits catatonic with concentration. Razored bald but for a tyre-tread shading up the back and a truncated quiff at the front, he’s hunched forward, impassive, watching…

For a start there’s Double-Vision, triple-screened…

Two videos on closed circuit relay overhead, suspended between light-booms and girders, and one more screen panning across the back-stage backdrop. They’re synchronised, if not always exactly to the same colour-setting or degree of focal blur, into a festive junk-food for the eyes/ears, a funfair Coney Island of the mind. A Skinhead gets naked in a bare concrete yard, wraps himself in gasoline-soaked blanket and torches himself. William Burroughs crosses a city street all wasted and cadaver-thin, enters a phone-booth, lights a cigarette beneath a ripped collage of French-language ad hoardings. Riot Police (as on the ‘Voice Of America’ sleeve (Rough Trade, July 1980), or some Kent State University documentary) advance through tear-gas FX with nightsticks erect. There’s TV-ad ‘Jungle Burger’ out-takes with galloping penises. Poorly-animated UFO’s from some lost monochrome ‘Outer Limits’ episode. Geisha Boys And Temple Girls. Aerial shots of Tokyo, sodium streetlights, an auto factory, Capitalism + Electronics. The power of technology + the technology of power. “Toyota City” – you get the picture? Yes, we see.

And all the while ‘someone, sometimes, CRACKSDOWN!!!’

An insistently solid pagan repetition of Funk bass strips Western Music back to its primal roots. The natural-magic triggers of race-consciousness. Stephen Mallinder mouths lyrics that are vocal rhythms in chant. His white guitar, brown C&A sweatshirt and red neckerchief concede no flash or show-bizzy projection-pretentions, yet Cabaret Voltaire is all around you. I’ve heard the current ‘Crackdown’ (1983) set on domestic sound-centre, seen the Doublevision-label video on small-screen, met the persona dramatis at Western Works, yet experienced en masse, collectively, in toto, it’s stunning. A multi-sensory circus for all senses – and then some. An organic unity only glimpsed at when its constituent elements are ingested in plural forms. Live, with added perspective-effect and depth-of-field, it’s an incomparable spectacle. The only remotely suitable analogy I can come up with is the magnificent Clock DVA stage ritual.

Richard H Kirk chain-smokes throughout. He’s in leopard-skin top, leather pants, hennaed (?) hair shimmering and slip-slithering over his forehead. He feeds in squiffs of synth, some silver metallic sax passages, some guitar as required by whim or premeditation. He sequences the infiltration of taped voices burbling beneath the mix and filling the twixt-number silences. Alan Fish squats behind a Berlin Wall barrage of Perspex drums, hexagon synth-drums, and percussion, meticulously laying down anchor-chains of beat around which all else swirls. He’s in red, a single aquatic-turquoise ear-stud, a frontal bush of scrupulously clean hair black against the shifting colour-filtered videos.

‘Twenty-four, – twenty-four, – twenty-four hours a day’ intones Mal into a web of sound dense enough to make neutrons dance in different formations. Real notes, real solid drop-beat riffs and kicks plentifully jived up by a grafting of taped voices that decode all those messages programmed into the conventional syntax of ‘conventional’ musics. Normal service may never be resumed.

Cabaret Voltaire is about as old as Atari Electronics Inc – but it’s getting younger every day. You’ll see nothing quite like this on any British stage this year. 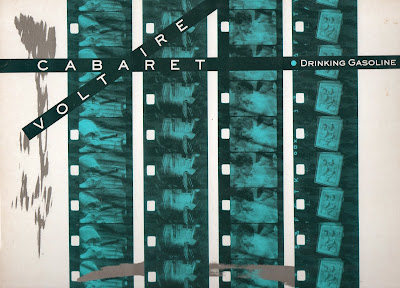 Posted by Andrew Darlington at 11:26

Order a professional Sparkling White Smiles Custom Teeth Whitening System online and get BIG SAVINGS!
* Up to 10 shades whiter in days!
* Professional Results Are Guaranteed.
* Better than your dentist.
* Same Teeth Whitening Gel as dentists use.