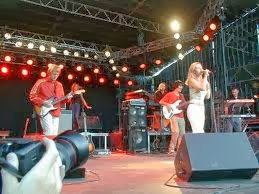 Jane Fonda in ‘Barbarella’. And the Smallfaces.

Hayley Mills in ‘Whistle Down The Wind’. And the Jam.

But Sarah Cracknell, in white feather-boa, silver-grey mini-skirt, pink heart choker, and kinky boots, is tonight’s REAL Starlet. Watch her ooze ‘we think you’re gorgeous. You really are,’ blowing sweet kiss-ettes to the assembled glitterati and fashion victims. And you know that Sarah is Venus In New Genes.

Saint Etienne are a timeless party. Of the Sixties. But not Sixties. Of Seventies Disco. But not Seventies either. More a Soda-Pop Dance Inferno fine-tuned for the Nineties. Sharply dark Pete Wiggs and Bob Stanley are the wizards of twiddly as the Bridget Riley ‘Time Tunnel’ spiral revolves on the backdrop behind them. Siobahn and Debsey stand stage-right in leather Hot-Pants, ‘Miss America’ sequinned top, and ‘Sonic’ T-shirt, doing a neat Supremes dance routine – ‘STOP, in the name of love’ to 1993 mini-hit “Who Do You Think You Are?” (it reached no.23). Five males and three girls on stage at any given time, plus the style-referencing slides – Sonny Bono to Jean Luc Godard and beyond. 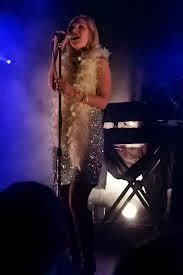 There’s a smooth opening instrumental Movie soundtrack punctuated with melodica ‘Hawaii Five-O’ quotes hinting at the diversity to come. And Saint Etienne shift across a wider range of sounds than I’ve seen on stage for a long time. Irresistibly straight La-La-La Pop like “Pale Movie” (no.24 in February 1994), the acoustic strum of “Former Lover” (from their ‘Tiger Bay’ album, with lyrics that go ‘Milan, when I was a kitten…’), and then into a Kraftwerk autobahn detour for “Like A Motorway” – by way of trad-Folk anthem ‘Silver Dagger’ but decked out with authentic synth-drums… and Presley’s electro-redesigned “We’re Coming In Loaded” (from his ‘Girls Girls Girls’ movie). ‘Do you like Elvis Presley? – good’ purrs Sarah, twirling her party frock.

She’s most impressive on “Don’t Forget To Catch Me”, laced with touchingly slow keyboards and a lethally incisive guitar solo. ‘You are tooooo kind’ she drools in appreciation.

Visually it’s a trip. Sonically it’s a complete edition of ‘Top Of The Pops’ when it was good. “People Get Real” is rousing Girlie-Pop to tear your face off. “You’re In A Bad Way” is a chart single to die for (their biggest hit, no.12 in February 1993). ‘We don’t normally do this’ oozes Sarah through shimmers of blonde hair, ‘encores are a big no-no. But just for you…’

And they close with “No No No”. A cover of Nancy Nova.

But me, I ran out of goose-bumps long before that. 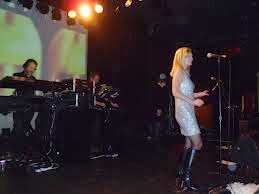 Posted by Andrew Darlington at 13:15