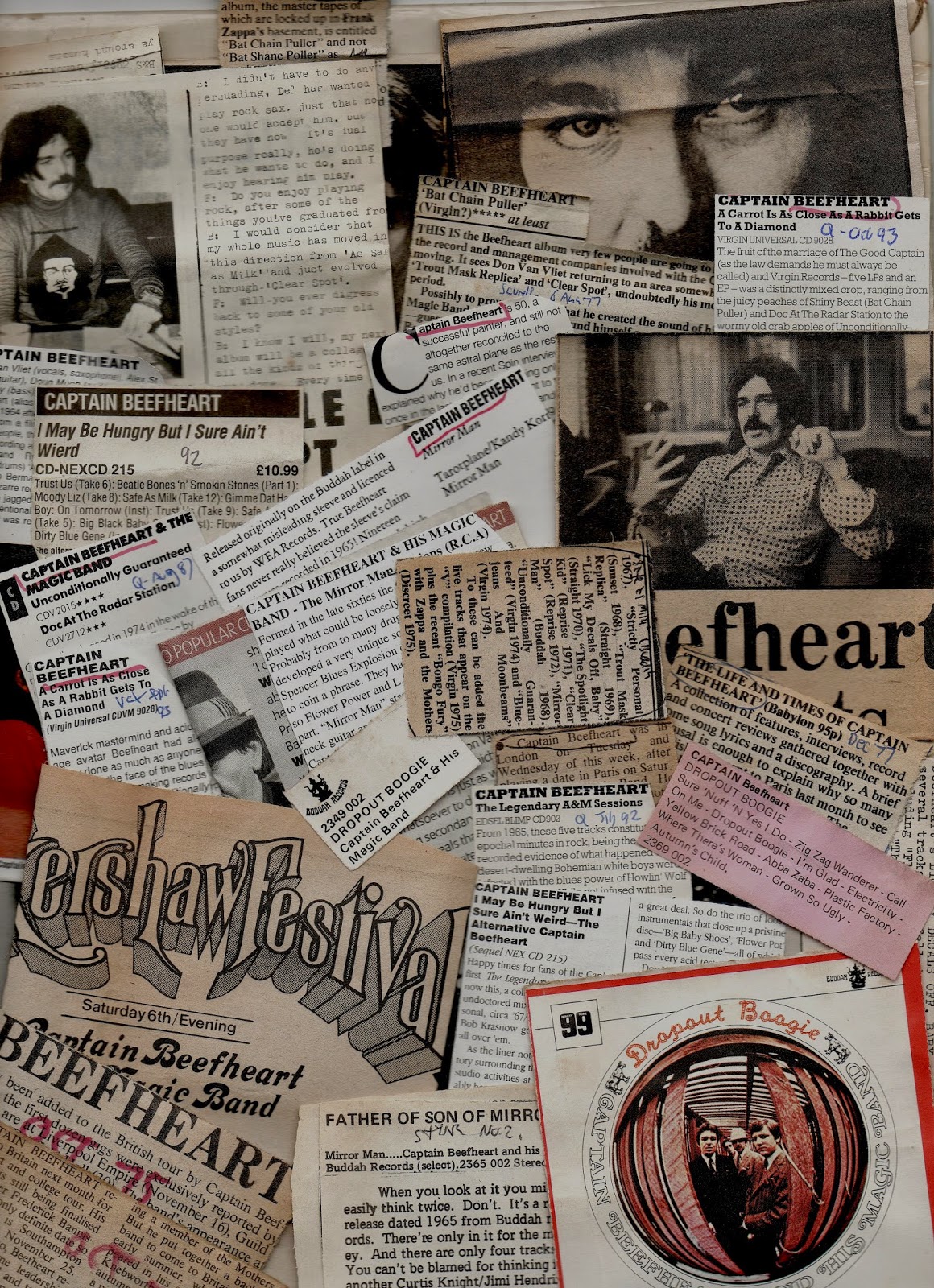 ‘REVIEW OF THE AUDIENCE AT THE
CAPTAIN BEEFHEART/
COMSAT ANGELS
CONCERT AT THE UNITY HALL,
WAKEFIELD’
(16 November 1980)


Beefheart wit. ‘I eat bananas – but I ain’t no monkey.’ Brandishing said fruit menacingly at the heckler.

Long hair. Shit, I’ve not seen so much hair since the Isle of Wight 1970. Grateful Dead buttons, and even sweatbands in ratted (oft now-balding) foliage. And dope – don’t bring your own, just inhale. Can this really be 1980?

Beefheart makes sarcastic putdowns of what he calls ‘New Wave’, the audience laps it up, perhaps no longer even adulation of the derider as of their own perception. This is tedious, close your eyes, razor all preconceptions, ephemeral clutter and period signposts, and are the basic elements that different? Beefheart hasn’t changed significantly since 1970. All the necessary components were there on his epic ‘Trout Mask Replica’ (June 1969) album, he’s fattened some bits of it out, underlined here and there, rearranged the punctuation, but the fragments of spaced-out chopped-up Blues chording, methedrine stream-of-surreal lyrics and Howlin’ Wolf vocals were present. The fact that the Magic Band personnel can change entirely, yet the sound remain fundamentally the same surely indicates more than a tad of formalisation? But after touring thirteen years that’s probably inevitable, a slickness, a blurring of the Don Van Vliet with the Beefheart persona until even he don’t know where the one ends and the other begins. If such an interface exists.

But what’s important surely is that, if he stopped in 1970, then the rest of Rock has only now got around to assimilating the full implications of ‘Trout Mask’, and that where he was then (and is still, despite repetitions) is also where we find PIL, Residents, Pere Ubu, the Fall. What he should be doing is recognising this – not fighting it. The Comsat Angels, if anything, come on more Pop, more melodic – he more dissonant, adventurous, unconventional, if he but had the nouse to realise it.

The audience also stopped, literally, in 1970, and don’t venture one nanosecond beyond. Sample audience dialogue ‘the Comsat Upstarts, never heard of ‘em.’ ‘No, Comsat Angels.’ ‘Must be thinking of Angelic Upstarts. Never heard of them either.’ Smug insular laughter. Press the green button. There’s a Beefheart poem about a woman taking a bath, who’s killed by a vagrant star from Saturn. Rapt attention. You wonder how they’d react to that same poem if anyone other than Beefheart wrote it? ‘Don’t bore me people’ he warns. They’re boring the shit outta me. A Beefheart poem from ‘Replica’ done on type-wrote script cigarette-burned and crumpled, its incantation cut up by ‘SHUT UP’ bellows aimed at the heckler at the back. Beefheart seems singularly perturbed by what is, after all, a regulation gig occurrence. Can’t he tolerate such lack of homage? ‘If I was that clever, I’d flex my muscles at you’ he howls, flexing said muscles. Cue ovation.

Yet all this detracts from the music, no – the spectacle, or the experience, or perhaps the total experience of Beefheart in full spate, when each facet of the disparate whole somehow gells into a multi-sensory phantasmagoria of euphoric absurdity, when the twains meet, when the merits or demerits of his lyrics, the complex simplicity of his scales, the idiot-genius hick-sophisticate mirrors no longer seem to matter, and it just IS, in perfect balance and rightness. He digs deep, the hallowed antiquity of ‘Safe As Milk’ (1967), the midstream stormer “Big-Eyed Beans From Venus” through to ‘Shiny Beast (Bat Chain Puller)’ (1978) and a stilted tele-prompter promo for ‘Doc At The Radar Station’ (1980), sprinkled with Zen Koan-like epithets aimed variously at Oedipal relationships, Reagan/Thatcher, ‘drums and percussion, percussion and drums, drums and percussion, percussion and opium and drums, drums and percussion.’

Trouble is, I guess, Beefheart comes from a time when demarcation was crystal clear, there was us and them, Hip and Straight, aware and brain-dead. Now there’s a multiplicity of Hip, each having relevance only to its peer group, no more Renaissance-man idea of complete knowledge of Rock totality. Cyclically each tribe has, or will have its period of media glimmer. CND as next year’s Two-Tone for eg. This gig is a minor Regimental Reunion masquerading as World War I. And this gullible coterie of retired Hippie sycophants are now lined up alongside the other, equally valuable/valueless subcultures of Punk, Young Soul Rebels, Post-Modernists, Mod, Rockabilly Rebels etc, each with their own vision of absolute truth. Comsat Angels deserve better. Beefheart deserves better, but somehow I guess the exact ratio of homage/homage-object suits him fine, and he don’t want to wander out into the big world outside clique adoration. Tough. 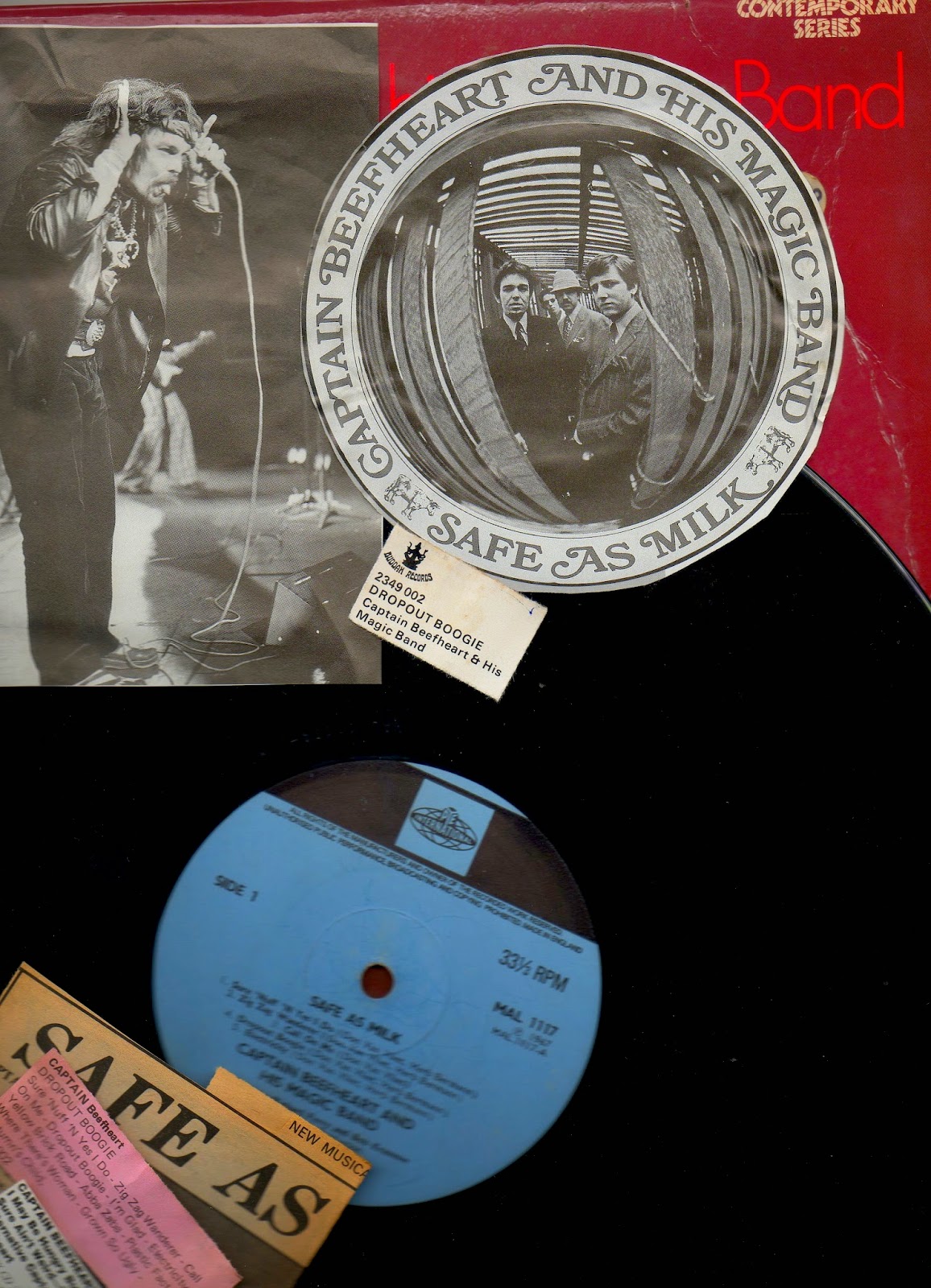 If you want your ex-girlfriend or ex-boyfriend to come crawling back to you on their knees (even if they're dating somebody else now) you need to watch this video
right away...