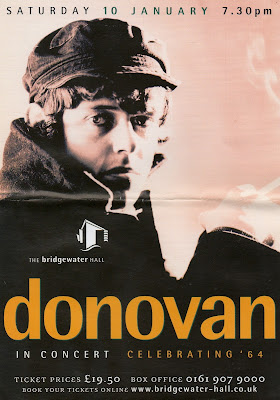 DONOVAN
at ‘The Bridgewater Hall’, Manchester

‘Of all the Pop and Rock Stars of the 1960’s, I was the first to be busted’ Donovan confides tonight. Telling how, one 4am ‘on a cold London dawn’ they came to raid a naked and ‘skinny little me’, wrecking his Beatnik pad in their search for two-ounces of grass, before the arresting officer takes him aside… and asks for his autograph. ‘Everybody knew me that day’ he adds wryly, as the story hits the press. George Harrison phones supportively, suggesting he can make much money from this uninvited notoriety. Instead, Donovan flees London for the remote calm of Scotland where he writes the hauntingly beautiful “Isle Of Islay” about feeling ‘like a seed on your land’, as if ‘a tide left me here’.

All the elements of the Donovan mythology come together in this story. The magic decade. Few of the songs tonight will date from outside of it, although he updates the Vietnam references in “To Susan On The West Coast Waiting” to include Afghanistan and the Gulf. Same situation, new wars. Name-dropping the Beatles too. And why not? He was there. He tells of being in India with four Beatles, one Beach-Boy, and Mia Farrow, of John Lennon patting the Maharishi’s head saying ‘there’s a good Guru’. And later that night, sitting on the bungalow roof with their guitars, George leans over and suggests ‘I could write a verse for that…’, the song that becomes “Hurdy Gurdy Man”. Of course, back then, singles don’t extend beyond 2:57mins, and Jimmy Page’s incandescent guitar leaves no space for it, but he sings George’s verse tonight (‘when the truth gets buried deep, beneath a thousand years of sleep…’). These stories are true. Flower-Power photographs record it all.

Now, Donovan Leitch, with only two guitar’s, harmonica and kazoo, relives them with “Catch The Wind” and “Colours”, then sits cross-legged on a (mock)-tiger skin between sprays of Michaelmas Daisies, to do “Jennifer Juniper” and “Guinevere”. Songs rich with rural idyll, the bejewelled weave of Celtic myth, Gipsy minstrel wanderings, the escape to simplicity, seagulls, and the ragged tousle-haired bohemia that his songs so uniquely inhabit. These few concerts landmark 1964, across forty years of time – in fact a CD of ’64 demos predating his first official recordings, are on sale in the theatre foyer. Those are years, and these are songs worth celebrating.

But whereas Dylan purposefully confounds audience expectations, Donovan delivers exactly what you expect. You suspect that when he urges you to sing along with “Sunshine Superman”, then gets the words wrong, it’s more due to memory-glitch than any conscious awkwardness. Yet unlike other, perhaps more cultishly celebrated icons, those who romantically suicided or chemically frazzled their brain-cells to psychedelic mush, he’s in intimidatingly rude health, here in his mauve blouse-top, black pants and waistcoat. The silver pipes of a huge concert-organ rearing behind the curtain backdrop as he relates how Irish Druids used guile to outwit marauding Vikings, then introduces a guitar he had made in the exact Celtic green, rowanberry red and lapis blue of the ‘Book of Kells’ which he’d seen in Trinity College, Dublin. So that when he first took possession of ‘Kelly’ ‘it would only play Irish tunes’. He wrote his most recent song, “The Promise,” to beguile it into his own spell. It stands up well, yet he hurriedly retreats back into the sixties to encore with a shimmering “Atlantis”, “Season Of The Witch”, and “There Is A Mountain”.

Posted by Andrew Darlington at 20:14

Start following our signals NOW and make up to 270% per day.