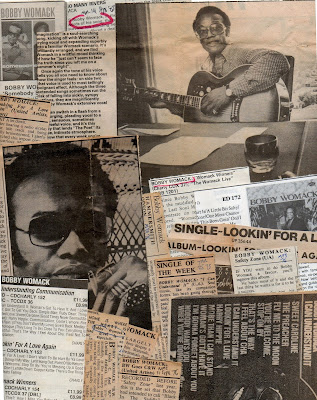 
The cover-sticker proclaims ‘The True Story Of The Greatest Soul Singer In The World’. Well… yes, since by then Otis Redding, Marvin Gaye, and James Brown were all gone, that was probably true. Bobby Womack was the last of the muscular old-style gritty blue-collar R&B shouters, from an era before the genre sophisticated into insipid vacuous gloss. But he was always more than just that. Sure, he had hits. And they were superb hits. But he was also a hugely prolific session musician and accomplished songwriter who played on so many super-cool records, and wrote more classic tracks than you could shake a funky tail-feather at.

The Rolling Stones first ever no.1 UK single “It’s All Over Now” was his, check the credits in brackets beneath the title. And “Midnight Mover” – which titles this playful autobiography, is another – a defining smash for Wilson ‘The Wicked Wicked’ Pickett. And it’s a great great story related with wit and humour, rich with highly entertaining anecdote and a wealth of insightful pen-portraits of the giants of Soul. Try the passage about the brothers catching a dose of clap from a white whore, and Solomon Burke’s terrifying fatherly advice about how to cure it!

Bobby was born 4 March 1944, a Pisces in Cleveland Ohio, one of five brothers so poor they grubbed through garbage cans for discarded pig’s tails, pigs’ snouts, ears and ox-tails, his father – Friendly Womack, even declaring ‘fasting days’ when they had no food at all. The Womack brothers began singing by mimicking their father’s inept ‘Voices of Love’ vocal group behind their backs. Until his father bartered a guitar in exchange for giving four free haircuts. Risking a beating, while Friendly was out, Bobby learned to play it left-handed, with the guitar upside-down, learning his style by listening to Floyd Cramer – a piano-player! Soon, the results of his first-ever recording sessions with his brothers were ‘stolen’ and released under a bogus name – ‘the record business started screwing me then and hasn’t stopped screwing me since’ he adds ruefully.

Their next singles were done for Sam Cooke’s SAR indie-label, the second – “Lookin’ For A Love” as the Valentinos sold two million, rewritten by Bobby around an old gospel tune. His father promptly disowned them for selling out to the devil’s music. Schmoozing his way into playing a Dean Martin session – and getting thrown out for his pains, Bobby wound up playing on Sam Cooke’s 1962 hit “Twisting The Night Away” instead. Nevertheless, this burgeoning career ran aground when the man he called ‘my mentor, a second father’ was shot dead in a Motel 11 December 1964, and within three months Bobby married Sam’s widow. He was just turned twenty-one, she was ten years older. The troubled marriage, entered more out of loyalty to Cooke, was violently resented by both families, by fans and record industry insiders. Bobby began using coke to escape the pain. 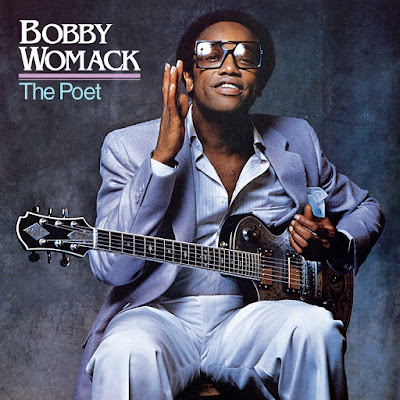 He got a call from Ray Charles, and toured with his band, but quit because he was terrified by Ray’s habit of piloting the tour-plane himself! He did session-work at Chip Moman’s ‘American Studio’ which brought him into contact with the greatest artists of the era, Joe Tex and Jackie Wilson. He played on Aretha’s ‘Lady Soul’ (1968) and ‘Dusty In Memphis’ (1969). Previously unimpressed by Elvis, he found himself overawed by the King’s charisma when he played the “Suspicious Minds” sessions. Then, dubious about the white boy Jerry Wexler called in for another recording date, he found that Eric Clapton played more authentic Blues guitar than he did! Bobby toured with the violently confrontational Wilson Pickett, but had to fill his own debut solo album – August 1968’s ‘Fly Me To The Moon’, with covers because he’d given all his own songs to Pickett.

He went through the coke-fuelled madness of Sly Stone’s ‘There’s A Riot Goin’ On’ (1971), emerging ‘too broke up to work’. He even faked blindness as an avoidance strategy to get out of playing live. Stevie Wonder called round to offer his sympathies. Bobby watched him through the fraying strands of his fake eye-bandages. His next record project was to be a C&W album he titled ‘Step Aside Charley Pride Give Another Nigger A Try’, until the distraught label changed it, and then dropped him.

To Bobby, ‘my view was, I wasn’t a guy you could put in a bracket’. Yet despite much hilarious absurdity, the music flowed, he toured and recorded with the Faces and the Rolling Stones. Until his album ‘The Poet’ (January 1982) provided his major break-through into the big-time, and it’s classic defining Soul, even though record company politics ensured he would never receive his just rewards from its success. ‘I’m a legend’ he acknowledges wryly ‘not a rich legend’. For anyone with a passion for sixties music, for Soul and R&B, there’s a wealth of it here. Even if you don’t like Soul music and never heard of Bobby Womack, this book is still a wonderful trip. 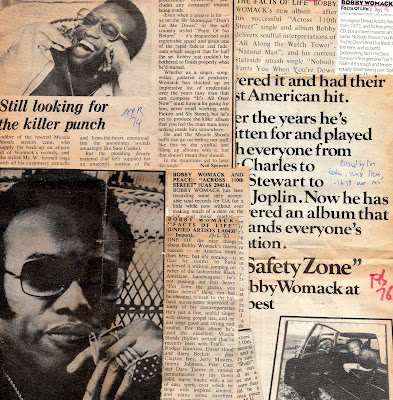 Posted by Andrew Darlington at 12:42