Poem: 'Mars Is A Robot World' 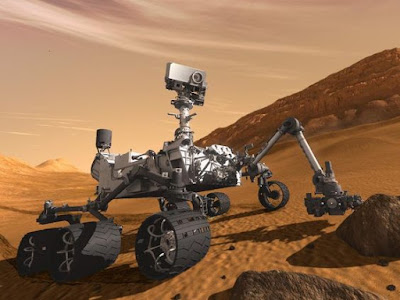 MARS IS A
ROBOT WORLD


even planets rust…
Opportunity touches down on
Meridiani Planum, 25 January 2004,
then 9 March 2005, Spirit Rover pauses
to see a vortex of dust devils spin by,
Curiosity sets down, Bradbury Landing
6 August 2012 in Aeolis Palus…
now Mars is a robot planet, where
each and every small soft apocalypse
that falls, is seen and calibrated,
a sniff that tastes thin Martian air,
lenses that glimpse the pale green star
recorded forever beyond returning,
treads etch patterns in tumbled grit,
encrypting it into the topography,
setting up ghost-ripples in dead rivers
immersing in shimmering tides
within the memory of shallow pools,
in evidence-trails of evaporation
left across a rim of scars, in a
squiggly striation-chain of eddies,
transient in the endless curve,
warping whims of hardpan where
soft wind is the only other sculptor…

in a million years from now
others will enter this star drift
seeking us and find no trace,
but for stilled machines
on this rusted planet… 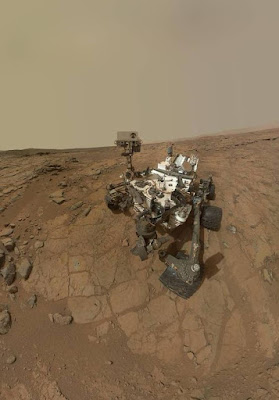 Posted by Andrew Darlington at 14:12

Claim free satoshis over at Easy Bitcoin. 11 to 33 satoshis every 10 minutes.

Did you consider choosing the best Bitcoin exchange service - Coinbase.

Did you think about exchanging with the ultimate Bitcoin exchange company - YoBit.

If you are looking to BUY bitcoins online, Paxful is the #1 source for bitcoins as it allows buying bitcoins by 100's of payment methods, such as MoneyGram, Western Union, PayPal, Credit Cards and they even allow exchanging your gift cards for bitcoins.

Join millions who have already discovered better strategies for investing in Ripple...

Are you tired of looking for bitcoin faucets?
Triple your claimed satoshis with this amazing BITCOIN FAUCET ROTATOR.

Thanks for this precious information i really appropriate it.