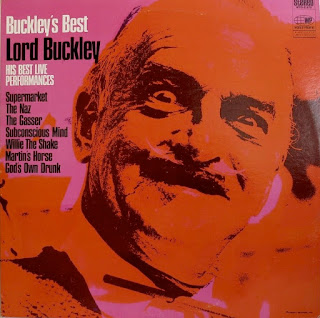 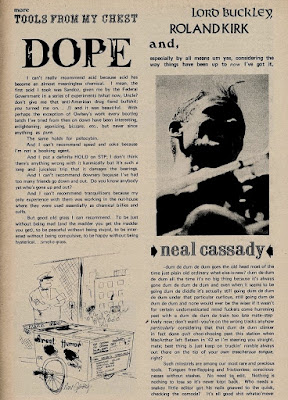 ‘Now I’m goin to put a cat on you who was the coolest, grooviest, sweetest, wailin’est, strongest, swingin’est cat that ever stomped on this jumpin’ green sphere, and they called this here cat…’ Lord Buckley. You remember Alternative Comedy? It was ‘Saturday Night Live’ launched by NBC in 1975. I was the ‘Comedy Store’, Steve Martin, Ben Elton, John Belushi, Rik Mayall, It was ideologically sound, it doesn’t condescend, it’s sharp, fast, smarts like a pepper-spray and cuts like Stanley Knife blades, right? But the hip stand-up monologue goes deeper. Little Brother might name-check Stanley Holloway and hence plug his routines into the North-of-England tradition that goes with Rob Wilton and Frank ‘King Twist’ Randall. Whereas American lines of influence can’t fail to trip over Lenny Bruce who brought self-psychoanalysis to the Supper Club circuit, Slim Gaillard’s ‘Vout Orooni’ BeBop babble… and the very great Lord Buckley. Lauded by Henry Miller and Jack Kerouac, as well as Bob Dylan and Frank Zappa, it was Buckley who opened up language with the holy ghetto-cleaver of hip verbal jumpin’ jive. 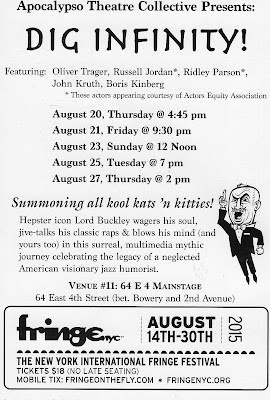 Born 5 April 1906, Richard Myrle ‘Lord’ Buckley invented vocabularies, the first to recognise the speed-energy and liquid fluidity of Black slang – and make it dance to his own ecstatic vision. He played sleazy burlesques, saloons, and strip joints, before OD-ing on a booze-induced stroke on 12 November 1960. But ‘the bad jazz that a cat blows wails long after he’s cut out’ – and through the good graces of the Demon Verbals record label, three historic Lord Buckley albums were once again circulating in the mid-1980s. And they stood with the best of the newest New Waves around. Buckley – ‘Lord Of Jive’, rasps a bizarre tongue from the record sleeves, with a Salvador Dali moustache, the kind of pith helmet last seen in ‘Carry On Up The Jungle’ (1970), and a tuxedo, a ludicrous combination he’d augment with hash-pipe on stage to lube the free-scat jargon of routines like “The Nazz” or “Willie The Shake”, each goof eulogy structured like jazz solos in fractured Black street-rap that’s now amazing, and must THEN have been staggering – near incomprehensible to all but the hippest of the hipster cult fliers of the seedy jazz underworld. 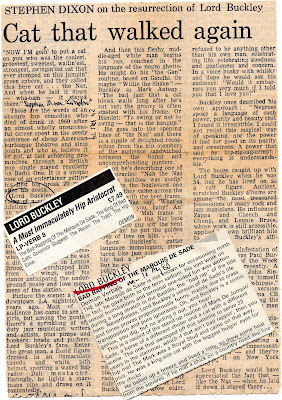 ‘Lord Buckley In Concert’ (1985) includes both those stand-out stand-up routines, plus “Black Cross” and “God’s Own Drunk”, and more, with ‘Blowing His Mind (And Yours, Too)’ (1985) continuing the esoteric Beat vibe live at Hollywood’s ‘Ivar Theatre’ in 1959 and the World Pacific Studios 1960, and ‘Bad Rapping Of The Marquis De Sade’ (1986) completing the trilogy with newly-discovered live performances like “H-Bomb” and “The Chastity Belt”, recorded during the year of his death in Oakland, California. Gutter monologues for nighthawks, hip-zig-zag-urmphs wired into the groove subterranean. But in one ear and out tomorrow? Doncha believe it. ‘When he laid it down – WHA-BAM – it stayed there!’ Lord Buckley’s an original, was – is, and further. That’s a commodity that’s too rare to ignore. So don’t ignore it. 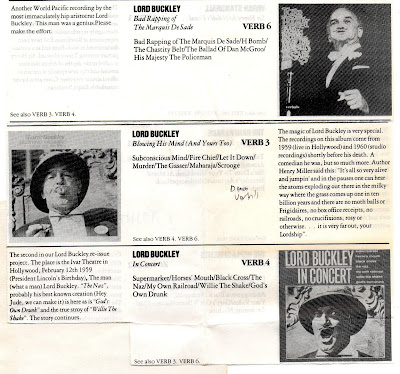 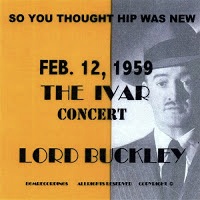 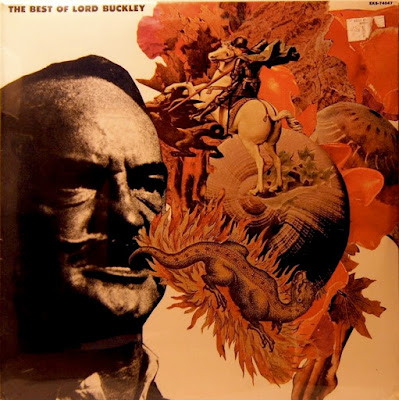 Posted by Andrew Darlington at 12:06