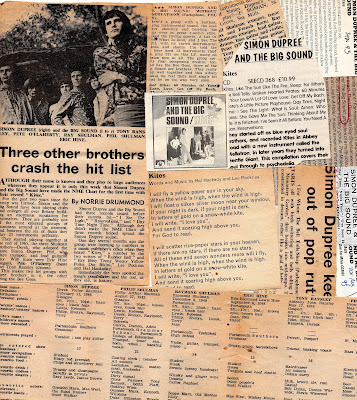 WITHOUT RESERVATIONS:
SIMON DUPREE AND THE BIG SOUND

Album Review of:
‘KITES’ by
SIMON DUPREE AND THE BIG SOUND
(See For Miles SEE CD 368) 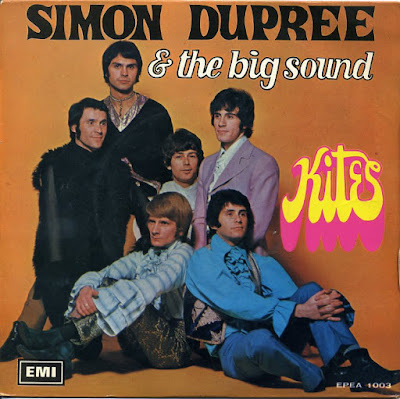 There was a Spencer Davis in the Spencer Davis Group, a Manfred Mann in Manfred Mann, and even a Dave Dee in Dave Dee, Dozy, Beaky, Mick & Tich. But the first thing to realise about Simon Dupree & the Big Sound is that there was no Simon Dupree. The second is that the Big Sound were never even particularly Big. In fact – like the Bee Gees, they were essentially three brothers, Derek, Phil and Ray Shulman. Which is a lot of brothers, but not as many brothers as there were in the Jackson Five or the Osmonds, so that’s not exactly one for the Guiness Book of Records either. And worse, over the precipice of the Sixties into the ‘Progressive Seventies’ the Big Sound de-evolved into the unforgivably self-indulgent ‘Old Grey Whistle Test’ stalwarts Gentle Giant. So why the hell should this shiny new CD package be worth your carefully hoarded pennies?

Well – there’s few art pretentions here. This is essentially the Big Sound’s one and only album ‘Without Reservations’ (August 1967) inflated from its original twelve tracks to twenty by the addition of their one-and-a-half chart singles – “Kites” (no.9 in November 1967) and “For Whom The Bell Tolls” (no.43 the following April), plus ‘B’-sides and early Blue-Eyed Scooter-Soul singles like their non-hit “I See The Light”. It’s all here. The complete blueprint Pop career from the Mod R&B covers – Homer Banks’ “Sixty Minutes Of Your Love” and Ben E King’s “What Is Soul” done like a Zoot Money or a Chris Farlowe might have done them, the perfect sweaty Club jive for every self-appointed In-Crowd at every mid-sixties Art School Dance, changing style and wardrobe into the mild psychedelia that then gave them their brief burst of ‘Top Of The Pops’ success.

And “Kites” is quite gently magnificent. Written by Lee Pockriss and Hal Hackady – the team responsible for Teen-trash like “Itsy Bitsy Teeny Weeny Yellow Polka Dot Bikini” and Bobby Vee’s “Rubber Ball”, it’s a track that floats a charming calligraphy of images on spiralling thermals of Chinese breeze – ‘I will float a silken silver moon near your window, /…I will scatter rice-paper stars in your heaven, / …all of these and seven wonders more will I fly, / when the wind is high’. With bit-part actress Jacqui Chan (she can be glimpsed in ‘Krakatoa: East Of Java’ in 1969, plus episodes of ‘Dixon Of Dock Green’ and ‘The Saint’) breathing oriental eroticism all over the instrumental break in a poetic Chinese voice-over that still packs more sensual charm than Sharon Stone’s entire movie-ography. “For Whom The Bell Tolls” follows (lifting its title from the John Donne poem “Meditations XVI”), drifting in on sound-bites of twittering birds and doomy Church-bells, before fandangoing into a perfect Pop of acoustic flamenco bursts and trumpet fanfares. Trivia buffs know already that beyond the confines of this album the group also recorded the highly collectible “We Are The Moles” (1968) under the Beatleseque guise of the Moles, and that after the demise of Gentle Giant Derek Shulman became the US-based A&R executive who first signed Bon Jovi, while Ray Shulman went on to do production knob-twiddling for the likes of Sugarcubes and A.R. Kane. But in their time Simon Dupree could occasionally be a class act, and the Big Sound – just once or twice, were able to live up to the boastful promise of their name. 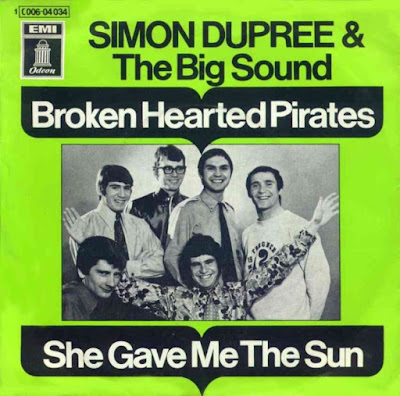 ‘WITHOUT RESERVATIONS’ (Parlophone PMC 7029) with ‘A Lot Of Love’, ‘What Is Soul’, ‘I See The Light’, ‘Sixty Minutes Of Your Love’, ‘Love’, ‘Get Off My Bach’, ‘There’s A Little Picture House’, ‘Day Time, Night Time’, ‘Teacher Teacher’, ‘Amen’, ‘Who Cares’, ‘Reservations’. ‘New Musical Express’ review says ‘here’s a group with a restless, driving instrumental sound, the lead singer shouting and bawling his songs over in great R-and-B style’

‘KITES’ (See For Miles CM109 - 1986, then See For Miles SEE CD368 - 1993) with ‘Amen’ (Sam Cooke song), ‘Who Cares’ (group composition), ‘Get Off My Bach’ (group composition), ‘Sixty Minutes Of Your Love/A Lot Of Love’ (Homer Banks medley), ‘Love’, ‘There’s A Little Picture Playhouse’, ‘What Is Soul’ + *singles. ‘Vox’ says ‘more than you ever needed to know about Portsmouth’s most famous group is contained within this twenty-track collection’ 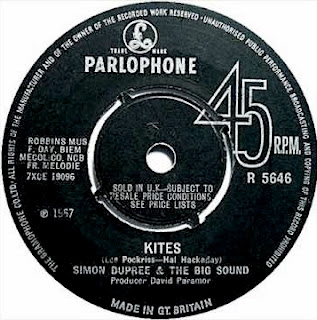 March 1968 – ‘For Whom The Bell Tolls’* c/w ‘Sleep’* (Parlophone R5670), ‘NME’ says ‘starts off with birds twittering and bells tolling like ‘In A Monastery Garden’, then breaks into mid-tempo. The melody is constructed in descant, rather like a peal of bells’ 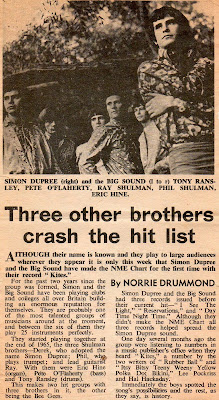 Posted by Andrew Darlington at 17:13