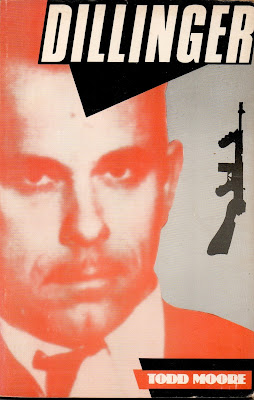 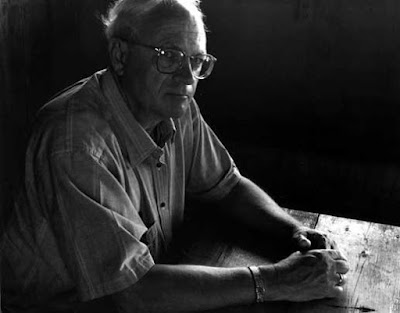 John Dillinger goes to see a Fortune Teller, a fat dark woman in a multicoloured robe. His lifeline frightens her because ‘it just comes to a very abrupt end…/ but something tells me you already know abt this.’ There’s a thousand poems concealed in the turn of a phrase, all of them with the odour and colour of death. Todd Moore’s long poem cycle is an endless road movie bathed in the glare of gasoline, the dirt, the slime, and the wang-dang-doodle of (dis)organised crime.

This is a part of the American romance of the guiltless outlaw that runs through William Burroughs’ ‘Last Words Of Dutch Schultz’ (1970) and Bob Dylan’s ‘John Wesley Harding’ (1967). Unholy sagas of dishonourable social deviants treated with white mythopoetic contact lenses. For Todd Moore it’s been an ongoing project since at least 1974, with excerpts and tasters strewn like bank-raids here and there along the way – but now assembled like faces in an identity parade line-up within two identically mug-shot book jackets for volumes one and two. Moving in largely short stark stabs it switches through sections variously titled ‘The Name Is Dillinger’, ‘The Taste Of Blood’, or ‘Robbing A Bank’. A (largely) first-person self-historification self-consciously concerned with James Cagney, Lucky Luciano, movie stills and dark brutal celebrity, its concerns are money, pain, crime, and the exact rearrangements of the face caused by a point-forty-five slug passing through the cheek. 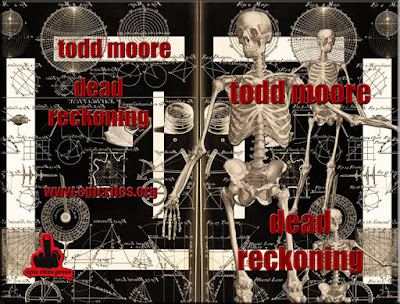 This is ‘dillinger of the reward poster and fbi memos/ dillinger of the dossiers/ dillinger of j edgar hoover’s bad dreams.’ Dillinger – says Moore, rhymes with ‘derringer’, the Wild-West handgun. Then he particularises it, rhyming gun with penis. An oldism but truism. Extending it out to include the symbolism of blood, the colour red, keys and penetration. Stealing cars is a species of rape, ‘entering others against their will.’ This is the psychology of violence, with its ambiguously unresolved father/son sex behind the pain in his eyes and in the angles of his face.

‘Dillinger’ is a verse-novel with subtexts, recurrent themes that touch rage and adrenalin, analysis and character deconstruction. Sections read like bloodied and hypnotic mantras to his untender mercies, with rapid cinematic flash-cuts and long landscape shots of night and cities and highways and violence. Dillinger is a slouch-hat, a gun in his pocket, and a vacuity of self-delusion, arrogance and brutality inside his skull.

Todd Moore snares it all. Exactly. 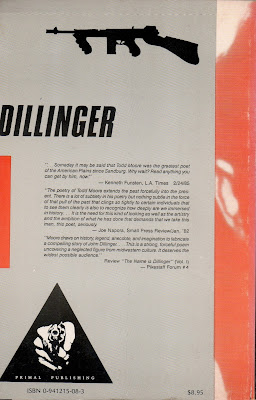 Posted by Andrew Darlington at 14:59