Poem: Plague Of The Undead 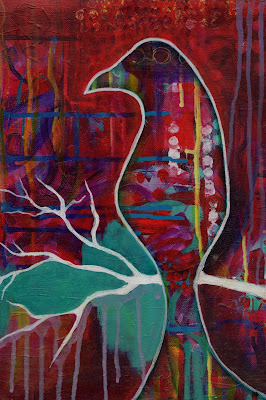 PLAGUE OF THE UNDEAD


a gibbet moon spills silver,
Peter Cushing grimaces, tired eyes asplinter,
Burke & Hare, he says
body-trafficking from the Balkans,
a coffin flotilla navigating the channel tides,
beaching in Dover, Cromer and Whitby,
infiltrating our English soil with their vile stain,
what becomes of my tavern on the village green?
the buxom serving wench brings
tankards of O RhD negative,
somewhere in the night a wolf howls
at the lycanthrope moon,
endangered bats flit the black steeple,
open your jugular, feed their thirst,
while still you can, or lose them forever,
there never was a tavern on the village green,
smiles Christopher Lee sardonically,
it was a movie, flickers on celluloid, nothing more,
every vampire-slayer and witch-burner
pollutes and contaminates our pure Wiccan blood,
the glow of each virgin devoured by flame
only serves to warm the chill of your empty soul,
it was we who welcomed Mithras and Minerva
until the half-man god nailed to a tree
replaced honest joy with guilt…
Bela hangs upside-down from the rafters
Boris dissolves into slow dust in the basement,
we must embrace dead and undead
for at the moment of our last breath
we are all of us the same…


This poem previously featured in
'IT: International Times'... and now collected into...


What is Tweak Vision?
Snatch visions from the starry dynamo of the cosmos. Words are supernatural. In times of gathering modern-angst confusion, words defy temporal gravity, rearrange space-time, choreograph new constellations. Word-play is all I have to take your heart away. Now tweak them this way and that, shake them out into new configurations to your device of choice.
This is Tweak Vision!
www.amazon.co.uk/Tweak-Vision-Word-Play-Modern-Angst-Confusion/dp/1986415260/ref=sr_1_1?ie=UTF8&qid=1522494861&sr=8-1&keywords=Tweak+Vision


From the deepest inner psyche, to the farthest
Hubble-glimpsed proto-galaxy. 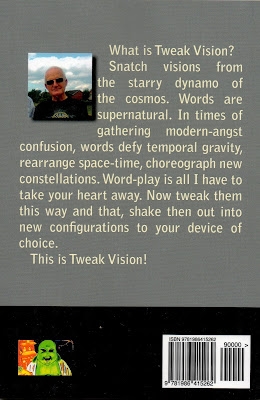 Posted by Andrew Darlington at 17:05