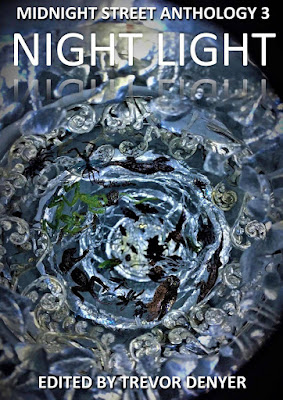 A SPECTRUM OF DARKNESS

Darkness has a spectrum of colours. Since, say – Stephen King took the horror genre overground, it has diversified into all manner of unexpected contortions. This is a book in point. There’s horror here, and each page is dripping in darkness. But it’s more than just that. Stephen Laws opening story “The Greek Widow” is a pursuit thriller with a shock dénouement, totally unexpected despite all of the clues and hints artfully strewn in advance. Tracking down the six Pygmet brothers, a dwarf acrobat team who once appeared on ‘The Billy Cotton Band Show’, ‘The Good Old Days’ and the ‘London Palladium Royal Command Performance’… lurking just around the corner of our collective memory. Tony Richards “Shadow Town” comes in from another angle entirely, seemingly by taking the pre-existing ‘Underworld’ movie mythology of an eternal war between vampires and were-beasts, but giving it new Nazi twists in a downbeat atmospheric cleverly-contrived post-war setting – Rita Hayworth divorcing Orson Welles is in the news, to where a new supernatural alliance is set to reshape the future in ways we almost recognise from today’s telecasts.

Just as David Turnbull’s “Scaffold With Green Tarpaulin” uses kitchen-sink 1950s settings and tele-jingles to suggest the origins of today’s rampant consumerism. Until Rhys Hughes “The Ostracons Of Inclusion” takes it off the scale entirely, into a series of magical realist vignettes of immaculate strangeness. Not even generic Horror any more, but taking skewed literary structures into new definitions, word games that juggle off the edge of space-time into spacey timelessness. Allen Ashley’s “Under” constructs another parallel troglodyte mythology that fundamentally shifts concepts of reality. 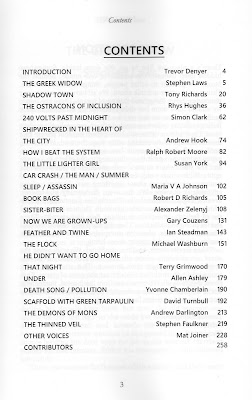 Simon Clark never writes the same tale twice. He knows his way around the destabilising concepts that unsettle the genre. This time round he mines his love of Rock music and recording technology to activate “240 Volts Past Midnight”, as scratchy as big spools of turning demo-tape. Mat Joiner adds “Other Voices”, a viral earworm tune that was ‘all the bedtime songs your mother had never crooned to you, the fairy tales you’d wanted to hear but never had,’ mixing it with the phonoghasts who feed on music. Andrew Hook’s “Shipwrecked In The Heart Of The City” is as beautifully tragic as a stillborn child. Terry Grimwood’s “He Didn’t Want To Go Home That Night” takes minutely observed ordinariness into a purely psychotic nightmare, while Ralph Robert Moore ignites a ‘Hunger Games’ variant into original terrain with “How I Beat The System”. 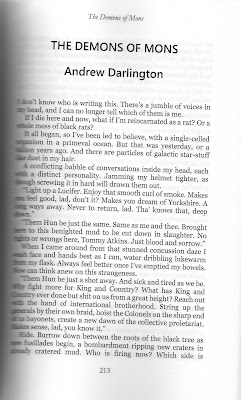 Posted by Andrew Darlington at 20:12

Your place is valueble for me. Thanks!… free online casino slots