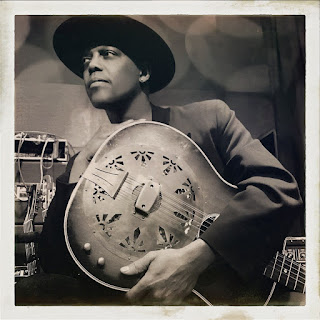 It starts with that playful old click of the stylus dropping onto the play-in groove of crackly vinyl. But there’s little else retro about ‘Diamond Days’. This is discreetly articulate, literate acoustic music planted firmly in now, balanced by an intelligent respectful acknowledgement of progenitor roots and past masters – ‘look ‘em up on the net’ Eric Bibb advises. He runs a spectrum of Blues styles and techniques – from the kind of gospel-infusion on “Shine On” that even a militant atheist like me can enjoy, then takes in Dylan (“Bucket Of Rain”, the album’s only non-original song) allied to Martin Simpson’s educated guitar, through the jazzy intimate interplay of the live “In My Father’s House”, into the deceptively-simple chords of “Destiny Blues” which universalises the existential itch at the heart of consumer opulence.

While so much current music is hopelessly impassed in repetition and replication, Eric Bibb takes the oldest form of twentieth-century music and extricates it all diamond-sharp by exposing the autobiographical truth of clear-sighted poetic observation. On an album replete with the Easter-eggs of hidden tracks and video-clip additions, nothing is contrived. Nothing is pretence. It flows, as it should, as natural as water, out of today. No striving for exaggerated effect. Even with the Orbit-ing electro-echo and ghost-horn on “Forgiveness Is Cold”, his subtle understated voice and sparse instrumentation tell it all as it should be told. 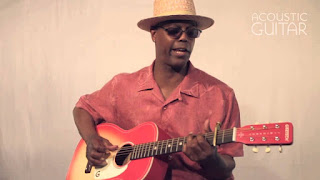 He’s living the Blues life from playing a Biker Bar outside Topeka, to a ‘Blues Cruise’ to Dominica, from a Five-Star Hotel to sleeping on a stranger’s floor. Follow him in the video, tall and elegant in flatbrim hat, as he travelogues you into ‘Luthers’, his favourite guitar shop down a Paris arcade, where he lovingly selects and unhooks guitars from the wall, to finger-pick “Candy Man” on a Gibson from the ‘Robert Johnson time-zone’, price-tag still dangling from its neck. He reminisces about Mickey Baker, and how Dave Van Ronk taught him “Talk It Over One More Time”. Back on the CD, “Dr Shine” is a timeless shoe-shine sales-pitch that could date from the Depression Years, but polishes up new like a story that’s stepped direct off the Columbus Ohio airport. The closing track, “Still Livin’ On” encapsulates it all, affectionately and knowingly nodding to the heroes who still strengthen Eric’s own repertoire in thumbnail sketches of those who inspired, and inspire in a persistent continuity seldom expressed better than it is here. Mississippi John Hurt, Son House, Roebuck ‘Pops’ Staples, their ‘voice inside my own’. The ‘hidden track’ is the old skiffle favourite “Worried Man Blues” renewed by his irreverent interjection ‘if anybody asks you who composed this song/ tell ‘em it was me, and I sat all day long’… and for a moment, you almost believe him. But that’s what Blues does best. Re-writes and renews itself. As this excellent CD does better than just about anything else you’re likely to hear this year. If there’s a balance to achieve, Eric Bibb has it dead to rights. Until the crackle fades. And the stylus lifts. 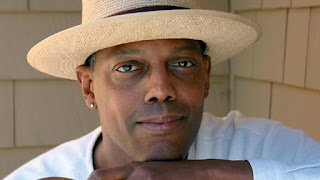 Eric’s ‘Diamond Days’ was my favourite Blues album of 2006, less scuffed-down torn-knees Blues, more discreetly articulate, literate acoustic music grounded firmly in now, balanced by an intelligent respectful acknowledgement of progenitor roots and past masters. Recorded in Nashville, and mixed in Stockholm, this is another meticulously crafted statement, a standout follow-up taking his muse ‘into the place where blues meets gospel and soul’. And because Eric operates from creative rather than commercial imperatives, the album structures an argument for the essential interactivity of the three. The tracks hang together in a coherent fashion, but oddly, the best of them – for the more atheistically inclined, are the ones that eschew the gospel fighting the good-fight as their motivating sentiment. 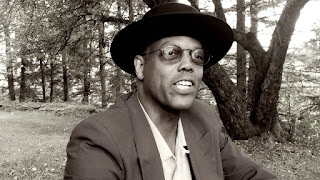 The undisputed highlight – “New Beale Street Blues”, is about walking to Memphis to play his own songs, join a jugband, buy new strings, and make a solid deal. While “Pockets” showcases his full-tilt throw-away wit over ruthlessly honed rhythms. Eric’s got ‘a pocket for my keys… case I’ve gotta leave town fast’ and ‘before I gave it up, I had a pocket for my spliff’. His lyrical inventiveness is polished – ‘I’ve been having so much fun, writing love songs, and this one’s nearly done’, there are unexpected strings on “River Blues”, he name-checks Memphis Minnie, is joined by Bonnie Raitt’s slide guitar on the vaguely Stax-ish “If Our Hearts Ain’t In It”, and shares dialogue vocals with Ronnie Foster on “Conversation”, even before the gospel spirit moves him into the muted distillation of a more narrowing aesthetic. Once there he grapples with the existential question of meaning with “Spirit I Am”, then reworks the ‘down to the river’ baptism theme, and the standard ‘Gospel Train’ of the title song. For wavering non-believers the Civil Rights anthem he adapts for “Stayed On Freedom” also has Hallelujah spiritual origins, just as his “Step By Step” dedication to Martin Luther King acknowledges the religious dimension of his visionary ‘Promised Land’, showing just how inextricably these things are intertwined. It’s a persuasive argument. But then again, this CD is designed primarily, first and foremost to meet the intentions of its creator – and perhaps, The Creator, rather than to please any target audience. Although, inevitably, it pleases anyway. 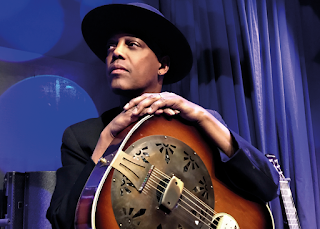 Posted by Andrew Darlington at 17:50