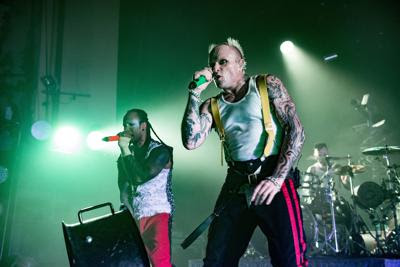 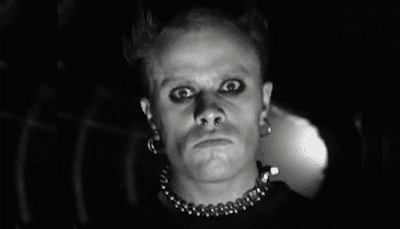 It rips your head. Trying to sleep afterwards, the flashbacks continue strobing inside your skull. You see Keith Flint drooling and leering, spitting fire and smoke, sucking blood and devouring human flesh. A grotesque exaggerated cartoon, Charles Laughton’s Quasimodo gone wrong, everyone’s nightmare scary nutter sat next to you on the last bus to Hades, feral and damned. Is Keith dangerous? on overload? or just a roll of Andrex to Liam Howlett’s Labrador puppy? Whatever, Prodigy is an unnatural phenomenon with a zero-tolerance boredom threshold. And they exist in the forbidden zone where (what Americans call) Digi-Rock meets Chernobyl.

And then there’s Beck, a giant Rubik’s Cube of all-over dead-pan humour and angular riffs, coming on for his umpteenth encore dragged up in full Rhinestone Cowboy gear as his band prance in horse’s heads, and DJ Small impossibly scratches out “Smoke On The Water” with just two turntables and a microphone. And Beck sniping ‘it’s a proven fact that people who throw shit have smaller genitalia than other people!’ Divine Comedy’s Neil Hannon guests with Ash (already augmented by new guitarist Charlotte Hatherley) to sing lead on “Oh Yeah, She Was Taking Me Over”. And Bluetones, harder than last time we saw them, but still kitten-soft, do “Heartbreak Hotel”, their tribute to the portly drugs ‘n’ burger-meister who (allegedly) returned home twenty years ago this day. ‘Hope you’re not one of the cynical ones who believe he’s dead’ demands Mark Morriss earnestly. And just for once, I suspend disbelief.

An OD is stretchered off while his delighted girlfriend takes Family Album photos of it all for posterity. And there’s an Auto-Geddon sculpture of impacted VW Camper Vans with painted-on Dinosaurian ribcage structures Dub-Henged into a mystic Techno-Collage you can walk through. While looking up during Echobelly’s set you see a plane provocatively circling dragging its ‘U2 + CAST at ROUNDHAY PARK’ streamer, skywriting adverts for a rival attraction in the cloudless blue. Placebo dedicate “Nancy Boy” to the freshly discorporated spirit of William Burroughs, while Brian Molko in silver clingpants jeers camply ‘for those people who threw that bottle. You have very bad aim!’ Then Kula Shaker feed the ‘Western sun’ verse from Crispian Mill’s Prodigy-collaboration “Narayan” into “Into The Deep”. Sometimes truth may come in strange disguises. Today it comes midpoint between his Ramones T-shirt, his Gautama Buddha ambience, and his ‘song about having a good time – forever!’

It rips your head. This is a mutant notion of Love and Peace, paved in regurgitated pizza and veggie noodles. It makes your ears sore and your arse so numb it’s like it belongs to someone else. You’re going to throw up any minute. It tastes raw, post-ironic and distressed. What it lacks in taste it makes up for in pace and in your face. It says Cake? Let them eat DRUGS…! But it’s the greatest legal high on Earth. 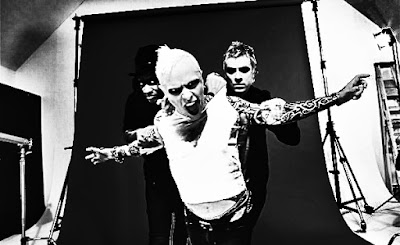 And then Prodigy stomp all over everything. They ignite on maximum, with “Smack My Bitch Up” (or, as Chumbawamba prefer, ‘Smack My Keith Up’), working on up through the psychotic toyshop of ‘Fat Of The Land’ (1997) plussed out with “Voodoo People” and “Poison”, enhanced by Gizz Butts (aka Janus Stark) of English Dogs, and it’s a study in dementia that not even a sudden ten-minute halt to prevent excess front-line crushing and the high body-count extraction of cracked-rib casualties etc, can impede. It’s otherwise seamless. It rates 10,000 rpm and Digging it Yeah on the Weird-Shit-O-Meter. Noise is its native language, and its only laws are the 140 bpm sonic cosh, sound waves so intense, so dense that they curdle your cerebral fluid. Prodigy is awesome. The end of history. The culmination of the hundred-year evolution adrenaline rush of helter-skelter musical momentum. 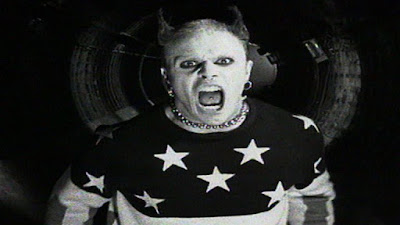 This is what Presley died on the crapper for. This is what Charlie ‘Bird’ Parker accelerated Jazz through quantum heroin-hell for. This legitimises Dylan’s Motor-Psycho Nightmare. It’s the vomit Hendrix choked on, the smell of napalm in the morning. It justifies Lennon’s assassination, and the Cuba crisis, Sid & Nancy’s diseased love, Charlie Manson’s ritual slaughter, Cobain’s pain, and Lou Reed’s immaculate fix. It’s all in here, from Punk to Metal through maximum voltage and back out again. Beyond this there can be nothing but regression. The millennium is here and now, and it’s stunning. ‘I’m on peak’ announces Maxim, ‘performing 100% proof,’ his head cricking like it’s disconnected, mouth open, vocal chords atwitter. An alien biohazard resulting from some forbidden neural atrocity. It’s beyond dispute. Prodigy are vicious, disgusting, and beautifully drawn. Their Not-Quite-Right-In-The-Brain card on permanent display. It rips your head. And trying to sleep afterwards, the flashbacks begin strobing inside your skull all over again.

Posted by Andrew Darlington at 13:56