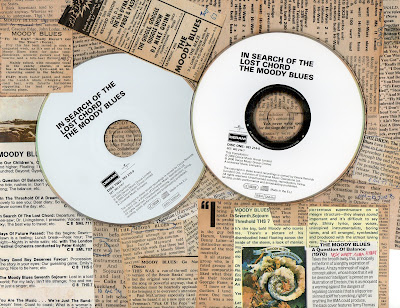 THE MOODY BLUES:
IN SEARCH OF LOST TIME

Hush! Listen carefully to the silence between the tracks, and you can hear the sound of history being re-written. Of course, we’re all so post-modern smart and knowingly informed we now know that Rock ‘n’ Roll is all about post-CBGB’s worn leather jacket austerity poses, and immaculately wasted junkie pallor, not polite middle-class white boys in turtle-neck jumpers and ludicrous moustaches on a prog-Rock quest to find the musical equivalent of the holy grail. Only we didn’t know that in 1968. Back then – sure, we worshipped at the altar of Gene Vincent, I had singles by the Electric Prunes, Count Five, and Question Mark And The Mysterians, but when I saw the Moody’s play the ‘Skyline’ Ballroom (over the Co-op store) in Hull I was pretty much impressed.

‘Mojo’ magazine once compiled a CD box-set of the best British Psychedelia collecting a wealth of strange stuff from mostly forgotten vinyl, but a kind of hipper-than-thou snobbery excluded anything by the Moody Blues. Yet – say, the jousting guitar interplay of “Ride My See-Saw” or the trilling Roland Kirk flute taking you into the ‘astral plane’ of “Legends Of A Mind” from this newly expanded edition of ‘In Search Of The Lost Chord’ would have fitted seamlessly into their selection. Here’s the original twelve album tracks as issued in July 1968, plus a bonus fifteen-track CD of related material filched from John Peel’s 16 July ‘Top Gear’ show, plus the regular outtakes, alternate versions, and lost ‘B’-sides (including the pretty strong Mike Pinder original version of the later Four Tops hit “Simple Game”, and a radio-session take on the haunting urban hymn “Tuesday Morning” from their previous ‘Days Of Future Past’ album). And it’s a curio very much of its time. 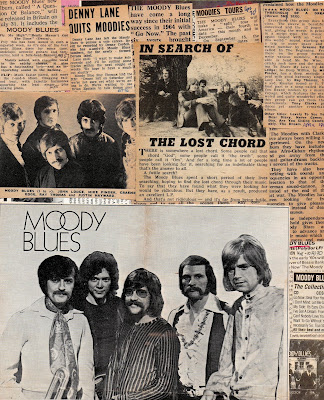 Phil Travers’ sleeve-painting opposes a skull with a Kubrick embryo – birth and death, womb to tomb, with the life-force crushed in between them. And the album itself opens with Graeme Edge’s silly pseudo-profound poem “Departure” about lying in the meadow and hearing the grass sing. He returns later to add another about ‘the scent of sound’ and ‘the sounds of colour’. Until manic laughter leads into their cerebral quest, one which Ray Thomas’ jaunty “Doctor Livingstone I Presume” equates with forays into the African rainforest, Columbus’ voyage over the horizon or Scott’s snow-bound sojourn (are there really ‘giant Antarctic eels’?). Soon, “Thinking Is The Best Way To Travel” rhymes ‘high as a kite’ with ‘faster than light’ – neatly combining two favourite tripper’s metaphors, while adding quirky Floyd-ian electro-pulses, odd pauses and strongly inventive Beatle-style harmonies, wrapping exactly the same lyric-message as George Harrison’s Beatles’ ‘B’-side “The Inner Light”. And who else was writing about LSD guru Timothy Leary? Well – the Who mention him in “The Seeker”, but the Moody Blues got theirs in first.

“Voices In The Sky” carries an effective wistfulness that still makes all the right connections, the acceptable face of yearning. And Justin Hayward plunders the play-in-a-day sitar manual for “Om”. Unfortunately the keyboard minuet, the opening ‘doors of wisdom’ and the symphonic excess of the linking sequences provide the first real symptoms of overblown pretension, and there’s evidence of wimpy limpness to come on “The Actor” and “Visions Of Paradise”. But on America’s west-coast this album was listened to with stoned awe alongside ‘Electric Ladyland’ and ‘Piper At The Gates Of Dawn’. In many ways its credentials were impeccable. They’d produced a cult album with ‘Days Of Future Past’ which failed to chart. Even “Nights Of White Satin” – now regarded as one of the ubiquitous ‘Heartbeat’-compilation bookmarks of the age, had only charted as high as no.19 so hippies could justifiably call it neglected or overlooked. In fact it was only rediscovered – and charted higher, much later. And although the Moody’s are now slagged off as the purveyors of orchestrated concept-albums, there are no strings here. Instead they use the mellotron, the kind of elaborate tape-operated proto-synth used on “Strawberry Fields Forever”. And the distorted sound-bending they contrive on “The Best Way To Travel” surely anticipates Kraftwerk’s “Autobahn”? 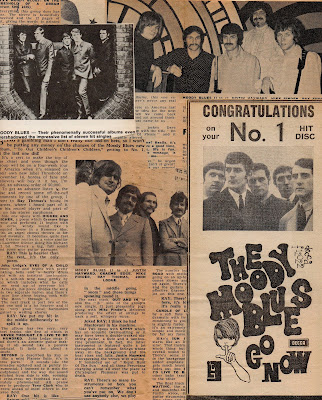 ‘In Search Of The Lost Chord’ remains an intelligent, aspirational album. And beauty was still very much a valid part of the equation, after all ‘Forever Changes’ strives for a kind of fractured beauty too. But whereas Love’s great album is legitimised by its unsettling subtext, there’s nothing vaguely unsettling here. And that’s its real flaw. While unlike, say, Pink Floyd, who went on to reinvent themselves across still highly-regarded subsequent albums, the Moody Blues never really evolved beyond this point. ‘In Search Of The Lost Chord’ would remain the high-point of their creativity. Each album that followed would be a repetition of its blander moments with even more vacuous prettifications. Their final moment of credibility – the single “Questions” with its abrupt tonal shifts, would chart at the end of the decade (no.2 in May 1970). So by the arrival of Punk they were no longer even considered legitimate targets, and the New Wave aimed its gobs of derision at Jethro Tull or Yes instead. But that’s only obvious with the benefit of hindsight. Rock history was not going their way. But we didn’t know that in 1968… 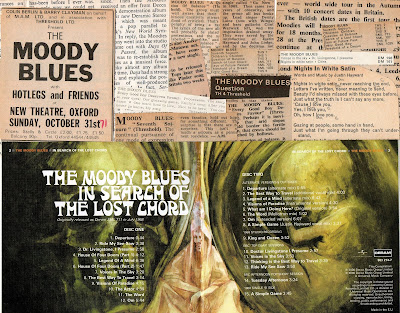 Before Justin’s Timberlake and Bieber, there was Justin Hayward. He maybe can’t dance like Timberlake, but unlike ‘Brat’ Bieber he knows his way around a good tune. You know Justin Hayward. If you don’t remember him as Marty Wilde’s sideman in the Wilde Three you’ve overdosed on all that Moodyblues classic-Rock stuff. Coming out the other side, and clearly less than loot-driven, this is a modest small-scale four-piece concert at the ‘Buckhead Theatre’, Atlanta, showcasing his songwriting across all phases of his career. “Captivated By You” – from his 2013 ‘Spirits Of The Western Sky’ album, opens (and closes) the credits over a sepia blur of old press photos, promising ‘a beautiful adventure is waiting’. 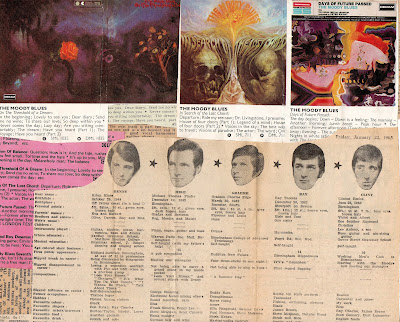 On a stripped-down stage-set he backtracks through the Moody’s from “Tuesday Afternoon” and “Questions” with some neat fills from second guitarist Mike Dawes, to “Your Wildest Dreams” from the 1986 album ‘The Other Side Of Life’. Justin prefaces “Land Of Make-Believe” from US no.1 LP ‘Seventh Sojourn’ with a tale of changes taking place within the apparently successful group. “The Eastern Sun” downsizes further, and is done solo. Then he ducks back for the terminally tasteful “Forever Autumn” from Jeff Wayne’s overblown ‘War Of The Worlds’. Sweetly forlorn and exquisitely gloomy he’s never less than clever, literate, articulate. An ornate poetry of ‘glorious halls’ and ‘exploding stars’ sung at the service of ‘your blue eyes’. Employing an anguished yearning quality only failed by its soft-core pseudo-profundity. It’s very… pleasant, which is like saying that polite intelligence is a bad thing. There’s bonus ‘On The Road’ docu-features and extra tracks, Justin time. 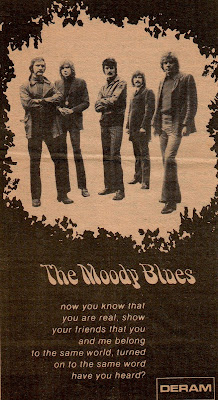