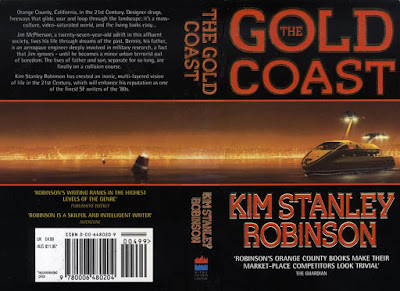 This is one TEDIOUS book. Basically a mainstream novel with tacky genre tack-ons, consumer-friendly packaging, and the kind of blockbuster vacuousness in which empty people say Jackie Collins things like ‘everyone is beautiful these days, we’re in California’. The ‘Gold Coast’ is Orange County, an endless bland Shopping Mall where they have loose but involved talk-through relationships and ‘lid’ eye-dropper hallucinogenics, where they have hi-gloss recreational sex as unerotic as a Jane Fonda Work-Out video, and ‘track’ programmed autos from nowhere to nowhere else particularly interesting. The hackneyed SF add-ons detract from whatever mainstream relevance – if any, the book might possibly have had if the characters were remotely interesting or the plot anything like engaging – which they aren’t, and it isn’t.

Dennis works in Defence, on Stormbee and Ball Lightning Projects – which are Ronald Reagan’s late unlamented ‘Star Wars’ by other names, cue TV-Soap power-glam Corporate Manoeuvres, while bratty son Jim, 27, is a ‘pacifist bleeding-heart pseudo-radical’ who writes cut-up verse, agonises over motivation (‘you have to do something new, but there’s nothing new left to do’), and gets into minor guerrilla sabotage as a reality fix. It’s well-tracked Randolph/ Patty Hearst radical chic territory which signals in neon a trashing-raid on Daddy’s ‘Laguna Space Research’ plant with a side-order of accidental patricide as climax – but Kim Stanley Robinson even funks out on that, and the denouement trickles out in tedious compromise instead.

There’s nothing here that’s not already happened, there’s no theme here that’s not already been done to extinction earlier, better, and more extremely. It’s probably unfair to snipe about his obsolete Warsaw Pact First Strike mind-set, or SDI projects – both already document-shredded by history, or his tiresomely dated American Imperialist vision – ‘Orange County is the end of history, it’s purest product’, flipping through the world – Moscow, Egypt, Crete, all he sees is an extended California – ‘the great late surge of corporate capitalism.’ But his ideas drag – and THAT’S unforgivable, his ‘autopia’ would be shallow even before JG Ballard’s ‘Crash’ got hauled off to the car-crusher. If this is the best new SF can do (which it isn’t) no wonder Horror and Fantasy are stealing the game. Tracking through these 389-pages is a major chore, you skip sections and speed-read others hoping to minimise boredom through compression. But on the evidence of this one TEDIOUS book, it’s goodbye to SF’s lurid garish past, and not really a good buy for the future…

Posted by Andrew Darlington at 18:50