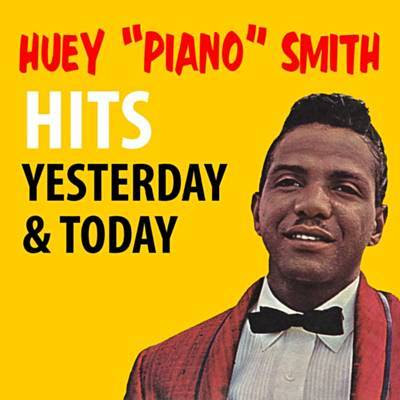 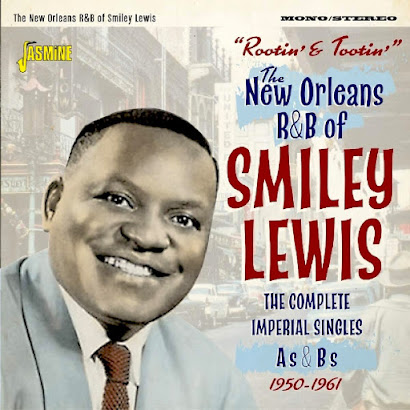 ‘Remember how that one went? Ah-ah-ah-ah, daaaay-o… gooba-gooba-gooba-gooba… ah-ah-ah-ah. Etcetera. The wit, wisdom, and social commentary of Huey ‘Piano’ Smith’ (page 258 of ‘The Stand’ by Stephen King. NEL, 1979).
Early Rock ‘n’ Rollers were plagued by an alarming variety of ailments, including a ‘Paralysed’ Elvis Presley, Johnny Kidd And The Pirates “Shakin’ All Over”, the unique testicular agony of Jerry Lee Lewis’ “Great Balls Of Fire” – but the most contagious of them all was “The Rockin’ Pneumonia And The Boogie-Woogie Flu” spread infectiously by Huey ‘Piano’ Smith. It’s most distinctive symptoms being uncontrollable all-night partying and compulsive jitterbug bopping. 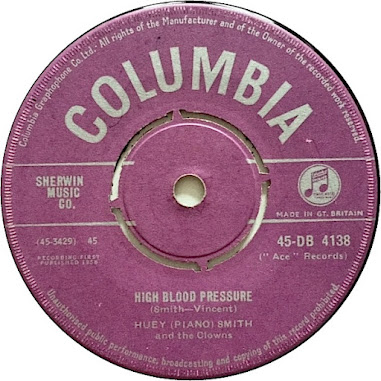 Born in 1934, Smith was a ubiquitous ingredient in what lesser journalists would probably refer to as the steaming New Orleans soul-gumbo of fifties cross-over R&B. Even on CD – or perhaps PARTICULARLY on CD, his bands sound authentically primitive, practically Neolithic, his loping four-to-the-bar rhythms and pounding stride piano single-miked but inflicted with energy levels insidious enough to bust beyond the technological limitations of the age, and serve up the Crescent City 1956 time-capsuled raw and uncooked to your state-of-the-art Music Centre. The excellent ‘Ace Records’ reissue programme has already scooped the pick of the litter by sampling sides first available here from the magic Sue-Island label catalogue. With ‘Rockin’ Pneumonia And The Boogie-Woogie Flu’ (1978, Chiswick Records CH9) they grab both sides of the initially two-sided Huey ‘Piano’ Smith And The Clowns title song, plus his biggest American chart single “Don’t You Just Know It” (no.9 in 1958). While ‘Somewhere There’s Honey For The Grizzly Bear, Somewhere There’s A Flower For The Bee’ (1984, Ace CH100) sucks in the slapstick “Somebody’s Put A Tack (In The Cotton Pickin’ Chair)” and “Susie Q” plus the novelty “Doing The Beatnik Twist”. ‘Pitta Pattin’’ itself selects cuts from a lazy drift further down the Louisiana bayou, tracks collected from a mid-sixties session and production hook-up with the Instant label, drawing on material from Smith’s part-time groups the Pitta Pats (“Bury Me Dead”), the Hueys (“Coo Coo Over You”), and even Shindig Smith And The Soulshakers, as well as his continuing line-ups of Clowns. No great shakes vocally himself, Huey hives off vocal chores to Clowns frontmen Bobby Marchan, Junior Gordon or Curley Moore – or Alex Scott in the Pitta Pats, with Smith himself content to mainline good-timey keyboard pounding. 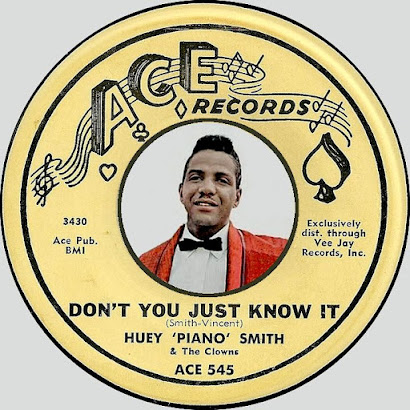 Before he eventually vanished into late-seventies Jehovah’s Witnessing, other names glide in and out of his career like a vinyl train-spotter’s vision of the grail. He’d begun in 1949 as Guitar Slim’s pianist, legend has it he plays on Little Richard’s “Tutti Frutti”, as well as on Johnny Otis and Lloyd Price sessions, while guitarist Earl King – and ‘Doctor John’ Rebennack are graduates of Smith’s boogie academy. It was Huey Smith and his band – New Orleans to a man, or a Clown! who first recorded “Sea Cruise” before Ace label-chief Johnny Vincent substituted voice-overs by his white protégé Frankie Ford, who subsequently took the song into the Top Ten and Rock ‘n’ Roll history. While Huey’s piano also doctors Smiley Lewis sessions (including “I Hear You Knocking”), giving the New Orleans bounce to, and putting a smile to Smiley’s best work.
When Dave Edmunds took “I Hear You Knocking” to a bizarrely incongruous November 1970 UK no.1, he breathed the name ‘Smiley Lewis’ into the instrumental break, acknowledging the originator. The song might have been written by Dave Bartholomew, it might have been produced by Allen Toussaint, Fats Domino might have cut a version in 1958 – as Status Quo would in 1990, but Smiley Lewis (aka Overton Amos Lemons) is the name on the Imperial-label original. But here we are still dealing aces. He never cracked the big time outside Bourbon Street clubs in the French Quarter, but these records stand scrutiny, even though Lewis himself succumbed to stomach cancer 7 October 1966. Less prolific or wide-ranging than Huey Smith, all you ever really need to know – and more, about Smiley is here, across thirty tracks from “Tee Nah Nah” through “Shame Shame Shame” (from Carroll Baker’s much-banned 1956 movie ‘Baby Doll’), to the song he bequeathed to Elvis Presley – “One Night”. Here Lewis sings the original ‘one night of sin, that’s what I’m now paying for, the things I did and saw, would make the earth stand still’ – and, though Elvis cleaned the lyric up, his white version still sounds more intensely DIRTY than Smiley’s rather world-weary grind.
But in 1950s New Orleans, Huey ‘Piano’ Smith and Smiley Lewis are irresistible, individually or in various combinations. As Stephen King says – wit, wisdom and social commentary! 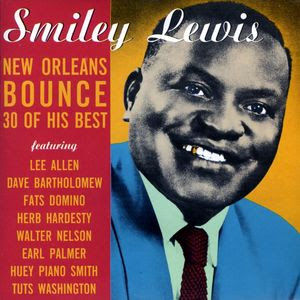 Posted by Andrew Darlington at 16:46

few week ago I felt some pains and I went to the hospital my doc told me I had hpv about 1 yr and I need to start the treatment early, he gave me some medicine to be taking and I told him no I’ll not, because I hated taking medicine when I won’t not see cure for the purpose. After I got home I started getting worried searching for strong advice and I found valid natural treatment online lot people says they got hpv cure from Dr onokun and I email Dr Onokun 3 days passed, I purchase his cure online some weeks after the process taking his treatment i got cured. I went for checkup twice after taking the natural treatment from the herbalist called Dr onokun and i tested negative. contact him on email: Dronokunherbalcure@gmail. com or his facebook page https://www. facebook. com/naturaltreatmentcenter1 or website via www. Dronokunherbalcure.wordpress. com