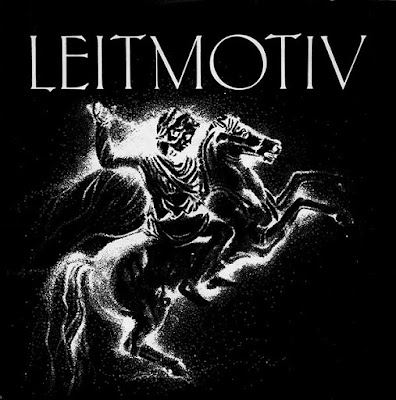 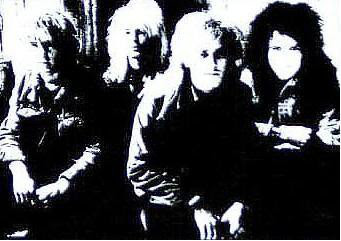 From nowhere… (well, from Dewsbury actually) to here, in just over a year. And evolution-wise that’s a long, long way. I saw Danse Society at a similar stage of development playing to thirty people. They were incandescent – but neither as tightly structured or as clearly defined as Leitmotiv this night. They strike all the best poses in the current Rock catalogue with a freshness that suspends disbelief, dealing in that trend-mugging Bauhaus no-man’s-land where styles collide and catalyse through grand gestures and dramatic aural theatre. There’s some Heavy Metal borrowing in their slow high-energy riffs, cross-matched with some Joy Division doomy blackness, collectively shoving a scorched-earth fuel-injected power-pack of a set fanged with shimmering stabs of guitar deadly as plutonium kisses, shaded with synths coiled and snapping into an architecture of abrupt electronic profiles. The air gets heavy and charged, notes pour and burst like disaster’s children chasing speed limits into a head-spinning concentration that strobes across all senses.
From nowhere… to a name on a leather jacket marginally below Killing Joke and a line above Play dead. A long, long way with a single-minded defiance turned to the style-vacuum where ideas change as fast as haircuts… 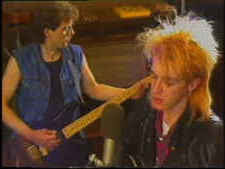 But first the p.a. cranks out a years-back Trad 78rpm to a scattered confusion of garish idiot-dancers trapped in neon, while the band plug in. Vocalist Simon Asquith lugs a huge wood-grain Gretsch, a high-razored blonde plumage, a sleeveless denim jacket – with lyrics snuck in top pocket, and a studded belt buckled at the back. A sartorially tribeless frontman in Combat-Rock agit-prop early Clash hand-me-downs. ‘‘Allo, we’re Leitmotiv (pronounced this night ‘light-motive).’ “Phantom” is first-come, bent into odd shapes through tremelo arm, then “Survival” runs up through brother Paul’s furious Ludwig drumroll into spacey echoed-out vox. They unwind some tension, Simon crouches low over his guitar in a subconscious re-run Eddie Cochran-Joe Strummer style, then near-duckwalks clear back to Chuck Berry – without probably realising it! “Beating Heart” gets a first public airing, lyrics adhered to mic-stand with Sellotape and voice mixed powerfully well-forward, then extracts from their ‘Curse & Caress’ mini-LP, synths gnawing and rasping into “Search” and the epic stand-out “Tin”. Their Indie-chart Pax-label current single – “Silent Run” (c/w “(Living In A) Tin” (1984, PAX 17), comes with oriental synth motif noodling around chant chorus, a seamless mesh of torrid intensities tight and taut, fresh flash and blood. The volume is cleanly sculpted, it seldom lets go, chockfull of the quick-cut changes and fragmentation devices of majestic guitar figures crammed around Steve Shepley’s Roland-Korg keyboards and etched by Dean Woodhead’s relentlessly jumping bass. They split four ways and carry no passengers. They produce that barbed head-ringing persistence of sound where you wake up next morning with waves still breaking in your ears. The sound of carnivores in a field of musical vegetarians. They set their sights miles high, and never look down. A beautifully crafted illusion that’s escapist as hell, and just as irresistible. But possibly – when you come from Dewsbury, there’s a lot to escape from.
Danse Society comparisons are unfair. They’re their own band and must get pissed off with such inaccurate journalistic strategies. But chartwise their Heaven’s also waiting, and this waiting must be Hell. In a year’s time journalists will be unfavourably comparing new bands to Leitmotiv.
From nowhere… they’re gonna go a long long way… 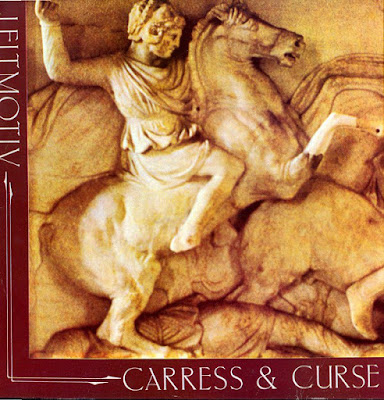 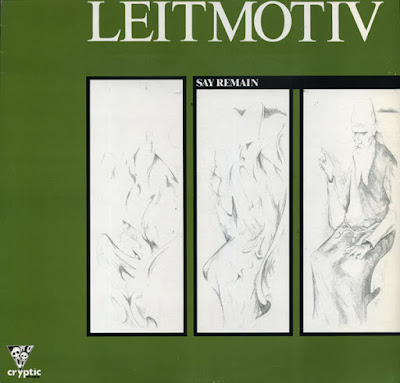 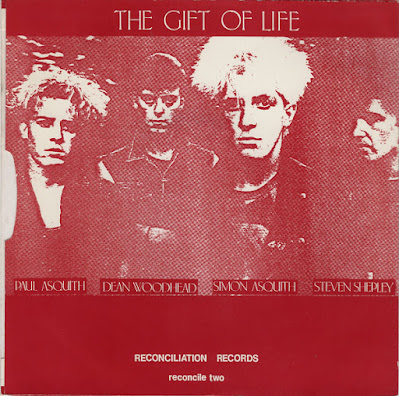 Posted by Andrew Darlington at 11:22

DR. OSATO`S CURE FOR HERPES1&2 - A NATURAL WAY TO GET HERPES1&2 CURED. If you have been looking for ways to naturally get rid of the herpes simplex virus from your body totally, then you are welcome to read further. Let's face reality here, you have tried so many counter drugs and you are confused, weak and angry because nothing seems to work. Good News For you my friend.... Yes, I came with a good news that will liberate you from the pains and stress of herpes outbreak, you will get total cure from this virus using Dr. Osato Herbal Methodology. Who is Dr. Osato? You may ask. Dr. Osato is a herbalist and a naturalist. He researched and identified some herbs and established a unique methodology to healing the human body using Herbal medicine that was confidently entrenched in his over 30 years of experience. According to him, he has the cure for so many diseases/virus like GENITAL HERPES, HIV, DIABETES, CANCER, HPV, HSV1&2, GENITAL WART, SHINGLES, VIRGINAL INFECTION and so many more. You can reach Dr Osato on his email: osatoherbalcure@gmail.com or WhatsApp +2347051705853. You can also contact him through his website: https://osatoherbalcure.wordpress.com or message him easily on his facebook page: https://www.facebook.com/Dr-Osato-Herbal-Cure-106002928040920/. I am using this medium to inform everyone how to get treated of herpes using Dr Osato recommended Herbal methodology.

it so amazing on everyone who contracted hpv to know about this 100% natural treatment which i also used to cure hpv out of my body. i'm free from this virus i found about the cure online from an ex hpv patient who also got rid of hpv with same natural treatment. everyone suffering from this virus should also inquire this cure. contact the traditional healer Dr Onokun. through his page  https://www.facebook.com/naturaltreatmentcenter1 or whatsApp +1 208 425 7799

Once again I want to appreciate Dr Ubarlo for helping me with his herbal medicine to cure my herpes. virus completely, I really suffered from this virus for the past 2 yrs, Right now I'm herpes negative after using the herbal medicine Dr Ubarlo sent to me .l give all thanks to God for leading me to Dr Ubarlo was able to cure me completely from herpes virus, Dr Ubarlo you are the best traditional doctor in the world God bless you sir, contact Dr Ubarlo for cure if you have been passing through similar diseases or virus like. herpes. HIV .gastritis. fibroid. etc via Email drubarlohome@gmail.com or Whats App contact +2348119508814 God bless you all