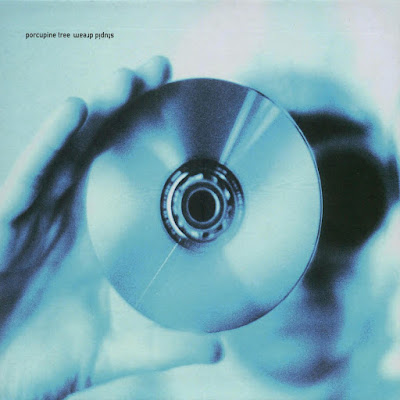 PORCUPINE TREE…
AND BEYOND

CD Reviews of:
‘BASS COMMUNION’
by BASS COMMUNION (Hidden Art Hi-Art 4)
‘WORLD OF BRIGHT FUTURES’
by TIM BOWNESS & SAMUEL SMILES (Hi-Art 3)
and
‘STUPID DREAM’
by PORCUPINE TREE (K-Scope SMACD 813)
Life-changing events come in infinite varieties of form. Birth. Death. A sunset. A gunshot. A sequence of six correct numbers. Or sometimes even a CD. The common factor at the nexus of this diverse creative weirdness is Steven Wilson, first – with occasional collaboration from the likes of Robert Fripp (on “A Grapefruit In the World Of Park”), he is Bass Communion. He then gets a production credit on ‘World Of Bright Futures’, a side-project orbiting Tim Bowness – Steven’s co-conspirator with art-rock duo No-Man. And thirdly, with ex-Japan Richard Barbieri, he does Porcupine Tree’s frostbite-clean cerebral-psychedelia. ‘Bass Communion’ (plus its free 23:09 min EP) opens with 58-seconds of stabbing morse beeps before gliding into soundtracks for dark movies and slipstream fictions with only a bass-figure providing a pulse to its moveless landscape. And it’s like eavesdropping on eternity. A planetarium of spaced-out intergalactic chill with perspectives receding away forever without ever exactly getting anywhere. Synth-breaths in eastern scales, then solitary sonar echoes shimmer on hi-tech laminations into minimalist statements of magnificent desolation.
Then, from Brian Eno or Terry Riley avant-reference points, into darkly-textured Arab Strap or Nick Drake terrain, Tim Bowness concocts more jazzy amalgams of Bowie vocal resonances so cool they’re chilled-out to the bone. There’s King Crimson’s “Two Hands” (Fripp again), Irish singer Sandra O’Neill augmenting Peter Hammill’s “Ophelia”, and wistful reflections on endlessly betrayed promise, those ‘bright futures, that always elude us’ where the ‘world cuts so deep.’ Samuel Smiles (with its free 5-track live EP) is both science, and fiction, at the edge of now. Finally ‘Stupid Dream’ – less experimental, more structured – but only by degrees, includes “Baby Dream In Cellophane”, “Pure Narcotic” and the single “Piano Lessons” showing the Brothers Gallagher precisely how phasing, distortion, twittering electronics, submerged sample-voices, death, birth, Christine Keeler, acoustic breaks and Floydian harmonies should be used to create hypnotically hallucinogenic Pop. Three albums. A prosthetic god immortalised in flatline rhythms. A genetically-correct mix resonating to the frequency of the digital zeitgeist. And hardcore Popcorn. Yes, CD’s can be life-changing events. 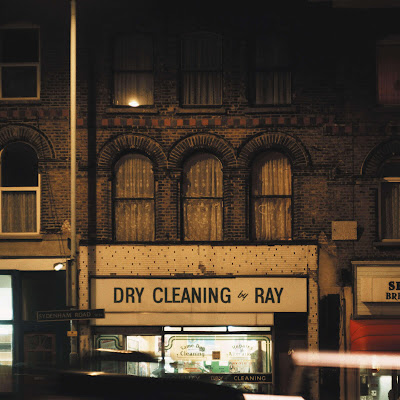 Album Review of:
‘DRY CLEANING RAY’
by NO-MAN
(Third Stone Ltd. Stone 035CD)
Is this taking it all one sponsorship too far? The CD sleeve is a virtual outtake from the wonderfully weird cross-cultural multi-sexual ‘My Beautiful Laundrette’ (1985). It show Ray’s Sydenham Road Dry Cleaning establishment from whence derives the title. Or perhaps not. For No-Man’s nine-track follow-through to ‘Wild Opera’ forms a very strange and beautiful package indeed. It comes from those twiddly-trickery artisans Tim Bowness and Steve Wilson, but it’s the kind of product you’d expect from Mozart oozing cyber-cluster stuff on a cheap Casio and a Job-Seekers Allowance. Moving vaguely out of the intelligent end of that spreading and increasingly indefinable subworld of Dance, ‘Dry Cleaning Ray’ is an occasional contemplation on the nature of fame – ‘it’s the same old song, it’s the same old shit, thirty years without a hit.’ Perhaps it’s what Tim calls No-Man’s own ‘critical success/ commercial flop pattern.’ Perhaps not.
But it’s broad enough to take in “Sweetside Silver Night” with its smooth Steely Dan jumpy jazz bass (‘to the souls of the failed old singers... and the dreadful songs they bring us’), the Bowie Ziggy strum of “Jack the Sax”, to the reverse tapes and echoey dub guitars of “Diet Mother” and the sensually brooding “Sicknote” which grows through the scrinch and screek of perverse electric delights like a time-lapse chrysanthemum. There’s some unrecognisably remixed edits from the afore-mentioned ‘Opera’ too, a metal-machine Muslimgauze collaboration, and a bizarre take on the godlike Serge Gainsbourg’s “Evelyn”, but the whole album sparkles and glitters like some pharmaceutically-inclined Tinkerbell has sprinkled each track with nuclear fairy dust. ‘In the heat of this pointless night’ Tim urges, ‘dazzle me.’ And it Dazzles. In such a context the Laundrette, located in hard Urban Disco, but surfing the cross- cultural multi-sexual cosmic vibrational energy waves lifting our planet into higher altered states, or some-such, suddenly it seems as cool as something very cool indeed. 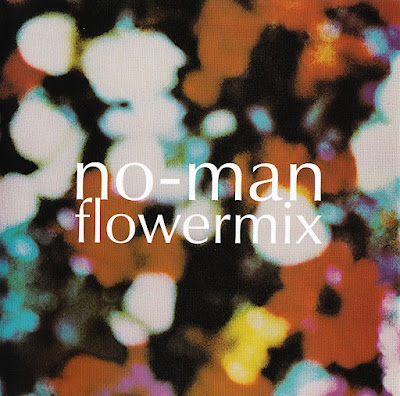 Album Review of:
‘HEAVEN TASTE/ FLOWERMIX’
by NO-MAN
(Resurgence Hi-Art 1/2)
“Housewives Hooked On Heroin”, No-Man’s current single, rams guest horn from antique Bopper Ian Carr through an ‘exclusive’ Scanner remix. It bridges worlds. It glides from stark glacial retro-ecstasy to sharp wide-screen slamming dance in three-minute 3D. But it’s never less than the dub and fader electrified alchemy of Tim Bowness and Porcupine Tree’s Steven Wilson. Now, taking time out from their on-going One Little Indian commitments, they indulge further along the increasingly liquid mix ‘n’ match outer rim of Progressive Dance – a zone that tunes into everything, sampling influences from ambient, ECM, and Symphonic Trance to Womb Music that begs to have its pulse taken for life-signs. But give Tim the correct truth drug and he’ll probably speed-spiel about sounds that shimmer like fabulous phantoms, machines with the gift of wings and lights that gleam hallucinogenic shining noises. And to this end “Long Day’s Fall” goes from senssurround playground noises and Hasidic violin through the dark psychedelic concoction of “Bleed” into the bongo’s and tinkling keyboards of Nick Drake’s haunting “Road”. Elsewhere – offsetting an occasional vocal flatness, they infiltrate a 21.19-minute “Heaven Taste” with ex-Japan luminaries Richard Barbieri, Steve Jansen and Mick Karn (on fretless bass and Dida), a “Why The Noise” with added soprano sax from King Crimson’s Mel Collins, and no less than Robert Frippertronic guitar noodling on “Angeldust”. When the world zigs, No-Man zags. Fusions slip and slither beyond definition. Their neo-Art Dance is further proof that the Club Mix is where the REAL creative moves are being made. 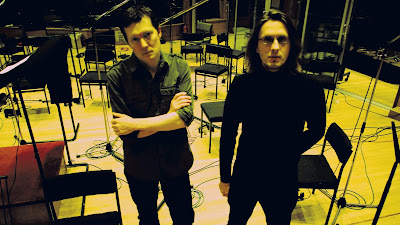 Posted by Andrew Darlington at 18:25

INDEED DR SAYO HERBAL HEALER HAS THE CURE FOR FOLLOWING HERPES VIRUS, HIV/AIDS, CANCER ALL TYPES, DIABETES, HEPATITIS A/B, PAD, ETC......FOR MORE INFORMATION VISIT HIS WEBSITE: http://sayoherbalhome.com/ I was once a victim of the herpes virus with many symptoms on my body, I was cured of the virus thanks to the help of Dr Sayo herbal medicine. I saw most of his patient testimonials on blogs and social media pages, cured of various disease/virus and illnesses. I contacted him on his email address to which he replied and asked me a few questions and the preparation method for which I paid, he sent me the herbal medicines and instructions on how to take it I apply the herbal medicine for 4 weeks and the symptoms on my body were healed after taking the herbal medicine treatment, I went for test and my result was negative with know trace of virus in my blood and am completely cured. You can also be cured, contact him on his email:  sayoherbalhealer@gmail.com  or WhatsApp him on +2349012175679 or visit his facebook page: https://www.facebook.com/SayoHerbalHealer