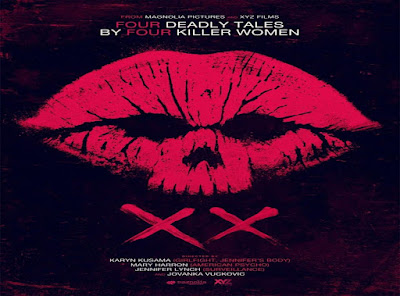 Review of: ‘XX’
With Natalie Brown, Melanie Lynskey, Breeda Wool, Christina Kirk
Director: Roxanne Benjamin, Karyn Kusama, Annie Erin ‘St Vincent’
Clark, Jovanka Vuckovic and animator Sofia Carrillo.
Original Release: Magnet Releasing/ XYZ Films, January 2017.
80-minutes. DVD, Soda Pictures, May 2017
The big lipstick kiss-print on the DVD cover-art, which also forms a skull, neatly catches the tone. Less triple-X status, more a defiant gesture. Although surely a female-centric project such as this is already as much an anachronism as a crusading quartet by Gay directors or black directors? At the risk of sounding tokenist, we already have movie-activists Diablo Cody (‘Jennifer’s Body’, 2009), Drew Barrymore (‘Charlie’s Angels’, 2000), Megan Ellison (‘Zero Dark Thirty’, 2012), Karen Rosenfelt (‘The Twilight Saga: Breaking Dawn 2’, 2012), Nina Jacobson (‘The Hunger Games’, 2012), as well as Kathryn Bigelow, Gale Anne Hurd, Sofia Coppola, Emma Thomas and on. But glass ceilings are there to be shattered, and every splinter counts.
This is an anthology, or portmanteau movie of four twenty-minute segments. Arty ‘Twilight Zone’ short story episodes with no obvious theme, linked only by spooked nursery inter-titles of decapitated dolls, butterfly animations, a pincushion with human teeth, and a haunted doll’s house. Cine-literate Jovanka Vuckovic’s “The Box” quotes from George A Romero’s ‘Night Of The Living Dead’ (1968), but its ambiguity has an inexorably clinical momentum sprung from a seemingly random incident on the 3:55 subway back to the suburbs. Little Danny (Peter DaCunha) asks the stranger with the lazy eye what he has in the red gift box tied up in a red ribbon. After glimpsing inside, he loses his appetite. No breakfast, no evening meal. Is he sneaking junk-food from the school cafeteria? No, despite the delectable culinary food-porn on offer, despite Daddy Robert (Jonathan Watton)’s ultimatum, he refuses. After five days without food they take him to the Doctor who explains ‘if you don’t eat, you’ll die.’ ‘So?’ says Danny. Mom Susan (Natalie Brown) resumes secret smoking, Dad’s under pressure. Danny whispers the secret of the box to sister Jenny (Peyton Kennedy), then to Daddy, who both also stop eating. On Xmas Day nobody’s new clothes fit, they’re all too skinny. With the three in terminal intensive care Mom starts haunting the subway hunting the man with the red box. She’s hungry. Zero resolution.

Despite Annie Clark’s primary genre being experimental Rock under her St Vincent persona – collaborating with Sufjan Stevens and David Byrne across five albums, her one-woman segment “The Birthday Party” is a contrasting black comedy, albeit Mom-themed and with a twittering electro-score. Subtitled ‘The memory Lucy suppressed from her seventh birthday…’ it has moments recalling the Fawlty Towers episode ‘The Kipper And The Corpse’, as effectively-frazzled Mom Mary (Melanie Lynskey) strives to conceal Daddy David’s corpse from creepy Nanny Carla (Sheila Vand), so as not to embarrass her daughter (Sanai Victoria)’s birthday event. With dead-Daddy finally revealed as the funky-Panda head sitting at the table. Cue kiddy-screams, and long-term trauma.
From domestic interiors to ‘so fucking epic’ vast desert exterior, Roxanne Benjamin’s “Don’t Fall” moves into more gut-wrenching traditional Horror Channel group-jeopardy splatter-core. Four slackers who’s ‘internal compass has failed me never’ go off-trail in a Camper-van, and find pre-Native American rock-art in the form of a horned beast territorial marker. ‘Maybe it’s cursed?’ Yup, it’s cursed. Gretchen (Breeda Wool)’s toxic graze turns shock-mutational in a convincingly nasty slasher killing spree. Her physical contortions recall Andy Serkis at his most grotesque. Until the rock-art has a new set of blood-red additional images.
Finally, Karyn Kusama has the strongest resumé, directing femme-actioneer ‘Aeon Flux’ (2005), and ‘The Invitation’ (2016) as well as cheer-leader flesh-eating romp ‘Jennifer’s Body’. In “Her Only Living Son” single-Mom Cora (Christina Kirk) wears a cross on a chain, while bratty tousle-haired son Andy (Kyle Allen), is a troubled prodigy who also tears classmate Stacy’s fingernails off, spatters bloodstains across the bathroom, and has hairy horned toes. Everyone, including the mailman, seems in on the secret that this episode envisages the outcome of Roman Polanski’s ‘Rosemary’s Baby’ (1968), with Andy’s real father – Satan, soon coming to claim him. Which force will triumph, Mom’s love or Andy’s dreams of ‘empires of misery’? With the same kind of maternal self-immolation as the vivid dream sequence in “The Box” where the family carve and devour Mom as she’s sprawled on the dinner-table, making the ultimate sacrifice for their appetites, Mother and Son crush each other to death in a killer embrace. A closure probably dictated more by time-constraints than by reasoned plotting.
By necessity sharp and razored to the bone, as a show-reel, this impressive and disturbingly varied female-centric quartet of miniatures should lead to follow-on mainstream commissions very soon. 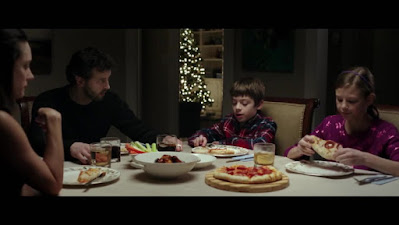 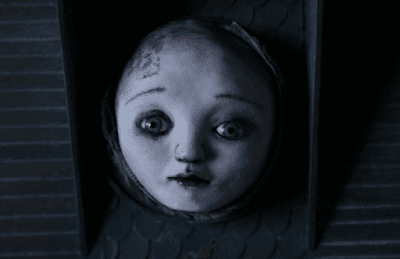 Posted by Andrew Darlington at 11:43