‘THE ORIGINAL INVASION:
A MIGHTY PANORAMA
OF EARTH-SHAKING FURY…!’ 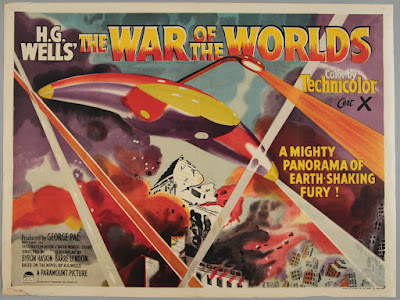 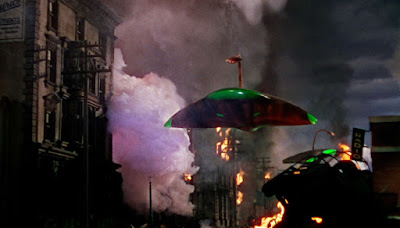 There’s an interesting exchange in the letter column of ‘Book & Magazine Collector no.258’ (August 2005). John Clute, well-respected authority on all matters science fictional has ‘a few problems’ with equally prestigious Chris Griffiths’ description of HG Wells as a writer of Sci-Fi. He points out that when Wells was writing the genre was actually known as ‘Scientific Romance’. The term Science Fiction did not come into general usage until much later, ‘from around 1931’. While Sci-Fi is generally accepted as a term for SF spin-offery, TV, movies, comic-strips and beyond, what Clute dismissively junks as ‘SF as product’. Of course he’s entirely correct in just about every detail. And yet, and yet. Think about it. Wells was writing way before Sci-Fi even existed. But he’s sure as hell made up lost ground since. In fact, in strictly Sci-Fi terms, he’s got to be one of the most prolific product originators of all time. Gene Roddenberry eat your heart out!
When Steven Spielberg remade George Pal’s 1952 version of ‘War Of The Worlds’ with Tom Cruise as the dishevelled action hero, he was also drawing on Orson Welles’ October 1938 radio-play version of the same text. While, apart from the ‘Classics Illustrated’ comic-book adaptations of the novel, hard-core viewers will no doubt hold an affection for the 43 episodes of the ‘War Of The Worlds’ TV series based on the premise that the 1952 invasion had actually happened, but had been hushed up (US TV premiere October 1988). There are also two movie versions of ‘The Time Machine’ (the first, and hugely superior one also directed by George Pal, in 1960), complicated by any number of variations on the time-travel conundrum all the way to the ‘Back To The Future’ trilogy. There are at least three filmic takes on ‘The Island Of Doctor Moreau’ (from the 1932 ‘The Island Of Lost Souls’, through a 1996 Marlon Brando, and on), and ‘The First Men In The Moon’ (from Nigel Kneale’s weakly amusing romp in 1964). And that’s before we even start on movies and TV series based on ‘The Invisible Man’ (from James Whale’s Universal film of 1933, and its many sequels). See what I mean? 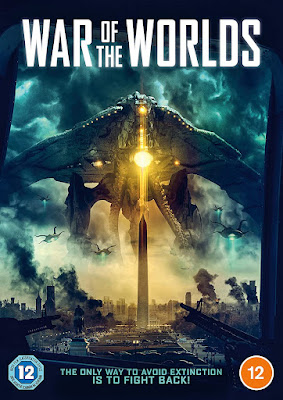 In Clute’s words, ‘the question of what term it is best to use can lead one into a fractal swamp.’ Before we move on, there’s also a media sub-genre in which HG Wells actually appears as an on-screen character, from a Michael Moorcock novel walk-on part, to amiably guesting in ‘The New Adventures Of Superman’, to even taking the star role of hunting Jack The Ripper through the engaging ‘Time After Time’ movie (in 1979, by Nicholas Meyer from Karl Alexander’s highly readable novel). And lest we forget, HG himself actively collaborated with the great pioneer Alexander Korda on one of the very first SF-based movies, the wonderful ‘Things To Come’ (1936), with its stunning vision of eternal world war resulting in regression to a new feudalism, and the aerial fleets of giant propeller-driven aircraft flying over the devastation of 1960’s England.
I first saw this original big-screen ‘War Of The Worlds’ at the after-school film club, and yes, it was a revelation, so gripping I got a bollocking for arriving late for my paper-round afterwards. It was well-worth it. Of course I’d read the novel, I knew they’d taken outrageous liberties with the plot. But the opening sequence alone, voiced-over (like Jeff Wayne’s horrendous musical) by Wells’ own words about ‘intellects vast and cool and unsympathetic’ regarding our Earth with envious eyes, and ‘slowly and surely drawing their plans against us’, recited over artfully replicated Martian landscapes drawn directly from the fantastically beautiful imaginings of Chesley Bonestell, justified the price of admission alone. But absolute veracity to the book has seldom been an issue. Spielberg merely shifted the action from America’s west coast to east, while Hungarian-born director George Pal took it all the way across the Atlantic from Wells’ late-Victorian London to California. Spielberg reverted to something almost like Wells’ original towering tripod war-machines, while here they are sinister swan-necked manta-rays levitating on magnetic-flux, with pulsing lights, thrumming electronic drones, and projecting lethal heat-rays that crisp you to a pile of glowing ash. HG would have his work cut out even recognising them. 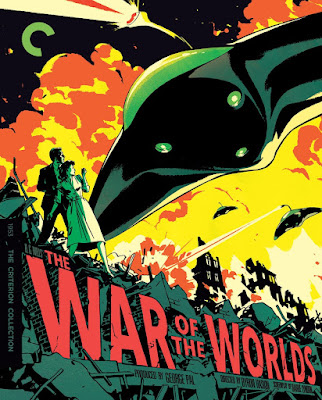 But the movie build-up is very effectively handled, with escalating menace as the meteoric projectiles impact, gradually cooling as cornball locals enjoy a square-dance hoedown, with just three hicks there to observe the hatch unscrewing slowly – ‘wait a minute, bombs don’t unscrew!’, and they watch… whatever is to emerge. Then, despite their mocked-up flag of truce - ‘everbody understands when you wave the white flag you want to be friends’, they’re atomised. These relentlessly predatory invaders come from Mars too, not just vaguely out there ‘someplace else’ as Tom Cruise’s Ray Farrier eloquently phrases it - and his slacker son Robbie (Justin Chatwin) adds ‘what, you mean… Europe?’ While – unlike Spielberg’s relentless zap-bang-pow cataclysm and exploding hazards, there’s a broader scope, a variety of sub-themes and tone here to expand the scope. Hero Clayton Forrester (Gene Barry) is unfeasibly strong-jawed and clean-cut, and he has the ever-smiling red-sweatered red-headed Sylvia Van Buren (Ann Robinson) as a suitably terrified scream-queen there to make the coffee and be rescued. Which is what women mainly did in fifties action-movies. While, because this is the Cold War 1950’s the USAF use nuclear weapons in a last desperate attempt to halt the mechanised invaders, with bunkered troops watching the results – just like at the White Sands trials, only to see the dread machines emerge intact from the swirling nuclear holocaust. Global devastation follows, spliced in with World War 2 stock-footage, riots and end-of-the-world looting. Six days to extinction.
As some kind of reference trade-off Tom Cruise’s encounter with the snakey triple-lensed probe in the derelict farmhouse building is lifted directly from a sequence in this 1952 movie. The creepiest part of either, or both films, in which you get your only tantalising glimpse of the Martians themselves. Until that red prehensile three-suckered foot becomes visible through the opening hatch of the expiring war-machine in the film’s end-phase. Certainly the atheistic Wells would have cringed at the final reverently pious voice-over, and the war-machine symbolically zapping through stained glass into the Los Angeles church where the worshippers hymn for salvation. His viral defeat of the invasion is purely down to separate evolutionary chance not divine intervention, but we can discretely pass over that. Billed as ‘The Original Invasion’ you can snigger at its now-dated SFX, its stilted seriousness, its caricatured acting, but – SF, Sci-Fi, or ‘Scientific Romance’, you can’t deny its relentless power. And you wonder, how HG Wells would react if he could have foreseen that one day his extravagant fictions would shimmer into life from shiny laser-ignited discs…?
“…it was the beginning of the rout of civilisation,
the massacre of humanity…”
(voice-over by Sir Cedric Hardwicke) 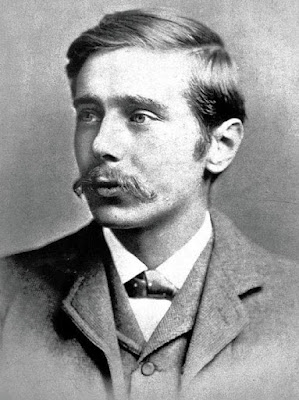 ‘The Man Who Could Work Miracles’ (1935) a Korda production , Wells’ script was published in the UK the same year

‘Kipps’ (1941), Carol Reed’s production with Michael Redgrave, the HG Wells novel was adapted into a theatrical music comedy as ‘Half A Sixpence’ in 1963, then 1965, which was filmed in 1967 starring Tommy Steele from the stage presentation. More recently it was staged in 2008

‘The History Of Mr Polly’ (1949) directed by Anthony Pelissier. An engaging social comedy based on the Wells’ novel, with John Mills as Mr Polly, the shop assistant who breaks free from his humdrum existence to go on a series of romantic adventures. This is charming stuff, about a dreamer who dares to make his dreams reality, although it can’t match the book’s naughtiness and slapstick spirit. A good cast includes Sally ann Howes, Megs Jenkins and Finlay Currie.

‘The Time Machine’ (1960) an MGM production directed by George Pal

‘The Island Of Doctor Moreau’ (1977) Burt Lancaster became Moreau for this version under Wells’ title, with Richard Basehart. Remade in 1996 with Marlon Brando as Moreau, and Val Kilmer, with airplane crash upgrades and DNA injections replacing crude vivisection.

Good to see, young bean. 'War of the Worlds' is still an amazingly powerful film.

Well, well, said Mrs Wood. What have we here? My friend from up north!

Good to see you. How are you?

Did you know that you can shorten your links with AdFly and receive money from every click on your short urls.