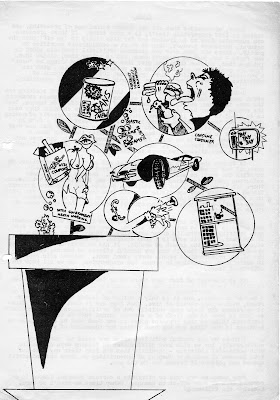 Amid the furore about Michael Jackson, other notable have also quit this continuum, Sky Saxon of the Seeds, Beat writer Harold Norse, Soft Machine’s Hugh Hopper, and sometime Ranter Steven ‘Seething’ Wells. At the decayed end of the ‘70’s I was doing a lot of readings up and down the country, considering myself pretty-much way ‘out there’, until accepted a gig (accompanied by Andy Robson) at Bradford’s ‘Vaults’, to find myself on a bill with new full-on Punk-Poets Joolz Denby, Little Brother... & Seething Wells, reducing their set down to scatalogical rhyming doggeral of some considerable force, to audience-rush response more usually reserved for bands. Joolz was sweet about my obvious bemusement. It caused me some hard reconsidering. They had something. Sure they did. In response I did some rethinking. They read hyper-fast, so I slowed right down, make every vowel count. Then, I wrote ‘News Bulletins In Colour’ (adapting a line by George Cairncross) and a few more which Steven published in his ‘Molotov Comics’ zine with much amusing verbal-banter exchanges. Didn't always agree with his relentless attack-negativity, but – as he moved to ‘NME’ and beyond, always read him with interest. His loss now is disturbing...
Posted by Andrew Darlington at 18:13