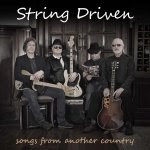 Album Review of:
‘SONGS FROM ANOTHER COUNTRY’
by STRING DRIVEN
(Backshop Records BSRCD003)
www.stringdriven.com
No longer Things, they’re now merely String-Driven. You might recall “It’s A Game”, from their early violin-driven Shel Talmy-produced line-up, which became a belated hit for, erm… Bay City Rollers? The Things own original is now a bonus-track on the CD reissue of their second Charisma album ‘The Machine That Cried’ from 1973. Glasgow-based Chris Adams is the only constant element from that first phase. His autobiographical “Grisham Hotel” narrates the story, how the ‘frankincense of failure… drowned the scent of fame’. Until, reconvened and commendably clean-energy, their Prog-Folk roots are fine-tuned with new game-elements of Americana. The sinuously stalking “Place To Lie” is a voodoo-game of disguised band names delivered in hoarse weathered vocals, ‘beetles, stones and zombies’, then ‘turtles, eels, eagles and birds’. See how many you can spot. “Die Without It” is a paean to Rock ‘n’ Roll and a spirited attack on samplers and machines, gliding in on low-slide guitars embedded in tight finely-honed small-group instrumentation, slickly Dire Straits alike – but in a good way. The ‘Another Country’ is the past, and Chris evokes lyrical vagabond troubadour-muso poem-songs about silver strings, Patrick Kavanagh verse, and meeting your idol at a backstage party (Dylan?). He gave Rock ‘n’ Roll the best years of his life… and these are melodies shaped by lyric-structure, measured in metaphors as teasingly elusive as Roger McGuinn’s ‘Chestnut Mare’. Literate songs tormented by restless phantoms of loss, regret, ghosts and past-tense dreams, ‘gone for good, gone for bad’, but either way they ain’t coming back. If ‘Rock ‘n’ Reel’ had an album of the month, this would probably be it. But is there anything a new Bay City Rollers could make a hit out of? Probably not.
REVIEW BY ANDREW DARLINGTON
Posted by Andrew Darlington at 06:29