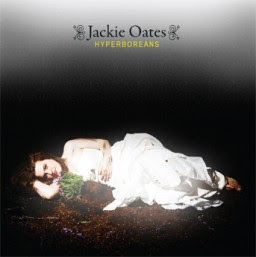 Album Review of:
‘HYPERBOREANS’
by JACKIE OATES
(One Little Indian / Unearthed TPLP1034CD)
www.jackieoates.co.uk www.indian.co.uk
I know my Robert E Howard. The wild mythical Hyperboreans were a tribe of white-haired, feline-green eyed, seven-foot tall savages, ruled by Witch-Men sorcerers who live to the north-west of Conan’s Cimmeria. A long way from the pastoral decorous beauty of Jackie O’s magical CD. Or maybe not. An ex-member of Rachel Unthank’s Winterset, at first glance Jackie’s third album is a bucolic vision of rakes, haycocks and pitchforks set in some rural elysian fields of “The Pleasant Month Of May”. Her clear high voice matched to sparse traditional instrumentation, a melodeon on “The Miller & His Three Sons”, plus occasional viola, cello and her own nimble five-string viola. But there is mythic darkness too. The dying Miller goes straight to hell, ‘Young Leonard’ drowns while skinny-dipping, the honest Sheffield grinder breathes ‘dust and steel’, and there’s a murder-ballad duet of an inconstant seducer killing his inconveniently-pregnant ex (with Alasdair Roberts on “The Butcher’s Boy”). Moving away from the trad:arr zone there’s an ‘awful wild despairing’ of ‘flood and fever, fire and drought’ in the harrowing desolation of “Past Caring”, a heart-stopping reading of a poem by Australian writer Henry Lawson. While Jackie renews tradition by drawing Bjork’s Icelandic strangeness into the mix, using the Sugarcubes’ “Birthday” as a reassuring outro. Beyond Conan’s River of Death-Ice, even her Hyperboreans have considerable charm, with a ‘love for every neighbour’. Not in Robert E Howard they don’t!
Posted by Andrew Darlington at 15:29