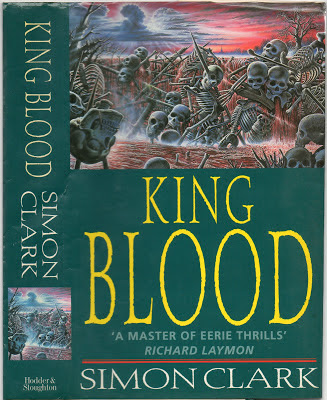 It’s so obvious it barely needs stating. To say that Simon Clark is the best novelist to emerge through the nineties is self-evident. ‘King Blood’, his fourth novel, is labelled Horror, and is being marketed as such. But its scope is epic. Nothing short of the onslaught – not of an Ice Age, but a new Heat Age, a Fire Age, and the geothermal convulsions that this brings about. Simon has simply outgrown genre restrictions. So far the pattern of his novels is to alternate tight small-group hazard plots (‘Nailed By The Heart’ and ‘Darker’), in which nice loving families are first menaced by the Saf Dar in the Sea Fort, then pursued in their car by the Invisible Hammer; with novels of global apocalypse (‘Blood Crazy’ and ‘King Blood’) in which the disaster is total. In the latter two cases the essential supernatural elements are minimal.

Both plot concepts – the genetic evolutionary trigger igniting generational conflict, causing the old to literally devour their children, and the geological heating of the planet’s molten core causing world-wide volcanic disruption with attendant tidal waves and eruptions of toxic gases, are ideas that would fit seamlessly into SF’s ‘School of (un)Cosy Disaster’ cycle. Both are themes that John Wyndham or early JG Ballard (circa ‘The Drowned World’ or ‘The Wind From Nowhere’) would kill for. The horror element is relegated to the lovingly detailed eviscerations and descriptions of rotting corpses. But even here – in ‘King Blood’ there’s a stunningly macabre sequence set in St Lawrence’s Parish Church graveyard where the ‘build-up of subterranean heat was detonating the gases produced by the putrefying bodies’ so that graves literally begin exploding, showering everything in the immediate vicinity with flame-grilled entrails and parboiled body-parts. It’s a passage as unique and as convincingly nasty as anything in the long history of Horror Fiction!

But in some ways the novel’s genre trappings become almost a distraction. Because Simon is determinedly staking out the whole of the 1990’s as his exclusive territory. All the cultural reference points are to ‘KFC’, Buzz Lightyear, Jarvis Cocker, Robocop Masks, Chewbacca, nostalgia for McBurgers, and Ren & Stimpey. There’s an impossibly attractive teenage hero who starts out stacking shelves in the local Supermart while dreaming of being a Rock star. Evidence of a wry appraisal, perhaps, of whichever-the-hell demographic group reads these books anyway? And there’s his charismatic video-jock brother from Seattle who’s called – wait for it, (Stephen) John Kennedy (!!!). It’s a perfection even the expletives can’t dent, in fact they even humanise further. There’s uninhibited sex at closely-spaced intervals, first with the Older More Experienced seductress, then with the school sweetheart. Then there’s the necessity of regular gore.

But the action and pace are relentless. His control of narrative tension is now so honed that he has you leaping ahead of yourself in urgency to find out what exactly is the terrible doom that’s counting down for Caroline, whether Rick has really killed his brother, and what the Grey Men are all about. While each separate incident is well-wrought and impeccably worked-out. The escape from the cannibal tribe that is engineered by igniting methane in a ruptured North Sea Gas pipeline. Or the meticulously described sequence trapped in the submerged Rolls Royce at the bottom of the New Venice Lake of flooded London. Even the final secret of the Grey Men (which I shan’t divulge) which in lesser hands could have proved anti-climatic, Clark uses to generate even more horrific levels of menace. Moving inexorably through to the mystical near-visionary climax with its intimations of absolution-through-sacrifice, couched in prose of near-transcendental power shot through with the kind of symbolism that gets to you on a deep and profoundly primal level.

It’s not often a novel leaves genuine after-images of nightmare. ‘King Blood’ does. Now, forty-eight hours after I read the final words, I still regurgitate vividly troubling images from its pages that not even the strangely compelling last few chapters can erase. With these first four novels Simon Clark is sending out a signal writ huge, and a challenge not only to the entire Horror genre, but to worlds beyond too. Here he’s setting the new benchmark. This is the standard you’ve got to reach to even qualify. And it’s awesome. 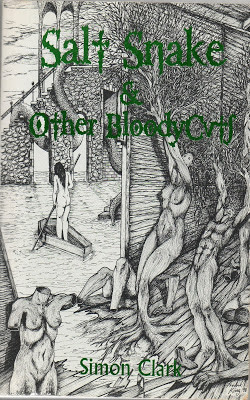 ‘... A few crumbs for starters, the meat comes later – you know, the blood, the thing in the graveyard... yeah yeah, the horror. Patience...’ (“Blood For Sex Bites”). There’s an Old Mill House in rural Wales. The mill-race runs beneath it, but it also disrupts temporal expectations by diverting there into an endless sub-mind of dark tunnels, viewed through the imaginative device set into the room above. So that when the narrator-voice sees a drowning woman trapped there, is he seeing a vision of the lost sister, or a premonition of what will happen to Anne with whom he’s commencing an affair? The ring on her finger suggests as much. But we don’t know.

This is part of only the second anthology of ‘the short horror fiction of Simon Clark’. And the first since he broke on through into Waterstones and Ottakers Big-time. But thus consolidated, it becomes obvious that these are what Martin Amis calls ‘voice-stories’, each one carried by the natural contemporary authenticity of the narrative and the validity of its emotional truth. There’s no pantheon of dark Lovecraftian gods. No Demonic rituals or Satanic incantations. Instead these are urban myths of phantom killer-cyclists and glimpses of moving corpses in crematorium ovens. Its new deities-of-choice include Jimi Hendrix – with an ageing Hippie Miss Faversham still waiting for the dead electric god to turn up for his rehab (“Howls From A Blinding Curve”), or the haunting bohemian romance of “Eyes Like A Ghost” with its mysterious Nick Drake/ Syd Barrett fragments.

The evil, when it comes, comes through a kind of magical realism, often unexplained or inexplicable. Yet while the horror is horrible – it’s also metaphorically beautiful in its precision. It arrives wrapped in parental love – as in “Lifting The Lid”, where the narrator-voice returns home to inform his parents that they are dead (while the stranger in his room hints that perhaps he, too, is dead). Or “Gerassimos Flamotas” – set in Kefalonia, where a bitter bankrupt farmer ‘sells’ his mute daughter, only to rediscover her hideously reassembled into a surreal human collage – ‘the arms to the hips, the legs to the shoulders. It gave it the appearance of a four-legged spider. A big fat white spider, belly up on the pebble beach with a head jutting out from its stomach’. But the real human horror lies in the guilt, remorse and self-recrimination when mute Rosa speaks ‘Papa, I love you’, and ‘he would hear those words for ever’.

Elsewhere, in the title story itself, tattooed bikers with names like Spuggy and Viper are just saved from caricature ‘Tom Thug’ nastiness by Clark’s narrative assurance, only to get their bizarre and largely unexplained come-uppance through the accumulating metaphor of a salt sea mist that gradually entombs them in ‘gouts of white’. As he’s transformed into ‘a large white blob’ resembling ‘an insect pupa’ the disturbed eighteen-year-old girl victim who also provides the story’s sexual catalyst, momentarily reminds Viper of his own early childhood innocence. Perhaps the pupa symbolises his rebirth into new a life-form? Perhaps not. Like “Acorn, A Bitter Substitute For Olives” (‘be afraid, be very afraid, because in Wales no-one can hear you scream!’) it suggests more secrets than it reveals, leaving only the voice to carry its conviction. A voice that first convinces with throw-away profundities like ‘I don’t believe there’s such a thing as a houseproud parent’, then stuns with the chill poetry of a word circling in his head ‘like a new moon caught by the gravity of a cold and lonely planet’.

‘Salt Snake...’ collects no less than twenty-five story-bites into 272 well-dressed pages, gathering pretty much all of Simon’s previously scattered stuff – a radio play, a few poems, ‘SFX’ book-reviews and oddities excepted, from sources as diverse as ‘Fear’, ‘Back Brain Recluse’, and ‘Dark Dreams’ – an impressive percentage of which went on to grace various ‘Best Of...’ anthologies. Sometimes his narrator-voice glimpses a vision of paradise beyond death, but gets incinerated in his attempts to reach it (“The Burning Doorway”). Then a brutal “Reservoir Dogs” scenario gets switches on its head by a hideous metamorphosis from cringing victim-drunk to man-eating monster (in “A Biter Bit”). For Simon Clark writes New Urban Mythologies hard where they need to be hard, but never less than accurate. He can do the ‘blood, the thing in the graveyard... yeah, yeah, the horror’ as visceral, as obscene and as nasty as the best of them. But there’s so much more to his fiction than just Blood and Grit. There’s poetry too. And there’s truth.
Posted by Andrew Darlington at 15:10

Order a professional Sparkling White Smiles Custom Teeth Whitening System online and SAVE BIG!
* Up to 10 shades whiter in days!
* Professional Results Guaranteed.
* As good as your dentist, for a fraction of the cost.
* Same Teeth Whitening Gel as dentists use.