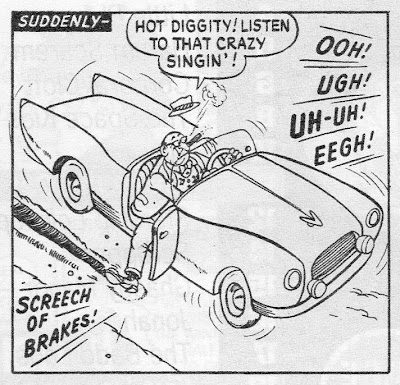 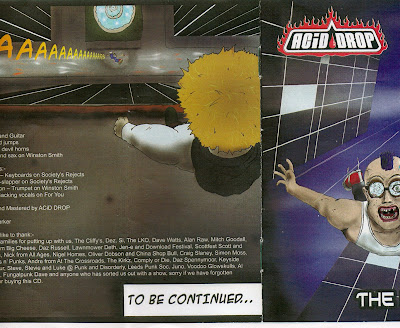 THE NEW LEEDS PUNK...!!!
ACiD DROP
The Drop Zone
(Acid Drop)
www.myspace.com/aciddroppunkrock
If the last Green Day CD didn’t quite make it for you, maybe ‘The Drop Zone’ will? ACiD Drop are Leeds-based sonic insurrectionists intent on putting ‘the fun back in Punk-Rock’, but they also put the Funk into Punk, and the pun into Punk, with an incendiary Molotov cocktail lobbed deep into culture-clash street. The vivid CD-booklet graphic tells the suicide-trip tale of Ciruc K Joy (Killjoy!) who adventures into psychotropic cactus-based compounds. Psilocybin, plus LSD – so much for sniffin’ glue! Ben’s glowering vocal inflicts verbal abuse then bats a defiant ‘Oi’ chorus into the mayhem while battling Ste’s spiky riffs. Stiv adds disruptive bass and devil horns. There’s some literate Orwell-pillaging, with ‘Winston Smith’ taking ‘1984’ into the jittery phone-tap CCTV ska-zone, as drummer Pete insinuates off-kilter sax in ways X-Ray Spex might once have done. ‘Society’s Rejects’ sounds more like the name of a first-wave Punk band than their more direct American New Wave Punk influences, but there’s studded tongues in several cheeks, and none of them ‘politically correct’. From the city of the Mekons, Gang Of Four, Three Johns... and Chumbawamba, they might claim to be barely afloat, but ‘don’t send the rescue boat’. ‘All The Same’ attacks the political system with a cunning Lydon cackle, until the acoustic play-out ‘The Last March’ emphasises the continuity of protest which simply moves to another town and goes on. So we know where they’re coming from, it’s where they’ve taken it, and where they’re taking it to that’s interesting. Maybe Malcolm McLaren didn’t die in vain?
Posted by Andrew Darlington at 23:17