'The Yardbirds' by Alan Clayson 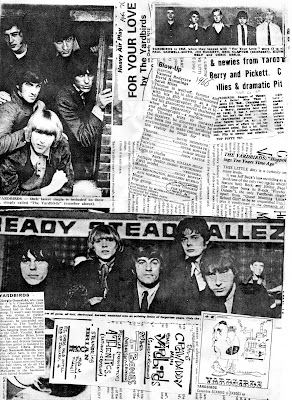 ‘YARDBIRDS:
SHAPES OF THINGS…’
Book Review of:
‘THE YARDBIRDS’ by ALAN CLAYSON
(Backbeat Books - $22.95 - ISBN 0-87930-724-2)
Your ‘Guinness Book of Hit Singles’ lists just five shiny Top Ten hits for the Yardbirds, from Graham Gouldman’s tempo-shuffling bongo-powered “For Your Love” in March 1965 through to the sharp pastiche-Bill Haley rhythms of “Over Under Sideways Down” little over fifteen months later. Two more of their vinyl 45rpm’s barely scratched the Top Fifty. They only ever recorded one proper studio album – ‘The Yardbirds’ aka ‘Roger The Engineer’. It sold modestly well, only peaking at no.20, although it continues to sell. Over the long decades since the group’s demise, innumerable forgotten and mostly ignored names have equalled such a score, and achieved far greater commercial success. Yet there are now more CD anthologies and compilations on ‘Amazon’ than there ever were during the Yardbirds’ brief lifetime. And people still write about, and people still buy stuff about them. Prior to Alan Clayson’s well-researched history-trip there was a 1983 ‘Yardbirds’ (from Sidgwick & Jackson), a clippings-rich archive-plundering volume with a wealth-of-memorabilia spattering its pages, produced by the band’s Chris Dreja (rhythm guitar) and Jim McCarty (drums), with ‘Comstock Lode’s John Platt on board for editorial assistance. Reasons for all this continued high-profile interest is not immediately obvious. Slavering critics used to point out the group’s Eric Clapton, Jeff Beck (Malcolm McLaren’s ‘the Paganini of the guitar’), and Jimmy Page lineage. But guitar heroes are now a devalued commodity. The New Yardbirds’ transition into Led Zeppelin still has slight currency value, despite the tenuous sound continuity – Robert Plant’s raunchy swagger is light-years from Keith Relf’s high nervous adenoidal whine, or – to Clayson, ‘barely the ‘Mannish Boy’ that Muddy Waters bragged about being’. So a large part of it must be their temporal positioning. An exact space / time nexus – trapped onto legendary celluloid by that incandescent “Stroll On” ‘Blow-Up’ clip, of Rock’s most mutationally exciting moment. After all, the Yardbirds hits were acting directly against The Who, Kinks and Smallfaces at their most innovative. And that’s before you even get to the Beatles and Stones. They were there on ‘Ready Steady Go’. There at psychedelia’s first Dayglo quivers. Peter Green told me of his awed fixation with Paul Samwell-Smith’s bass, watching the Five Live Yardbirds at their most Blues-Wailingest at Giorgio Gomelsky’s ‘Crawdaddy Club’. Cool R&B cult. Effortless Art-School class. A contact-high of blissful nostalgia for Mod Anoraks.
Of course, as a teenager, I loved the Yardbirds for their ability to compress a ‘progressive Shape-Of-Things to come’ vision – not into tediously pretentious concept albums, but with precise and enticingly strange two-and-a-half minute singles structured into immaculately segmented moments of tantalisingly evocative weirdness, until ‘only restrictions such as the common chord and Rock instrumentation put much of their music in the realm of ‘Pop’ at all’. Until, by the time they were recording the album – in less than a week on a primitive four-track machine, they were still to Pop in the way that Russ Conway and Thelonius Monk were both still pianists. To Alan Clayson too, I guess. His appreciation ‘mutated into a craving, an obsession, almost a religion’ with an ‘attic floor groaning beneath the weight of vinyl, tapes and memorabilia’. And he remains loyal to what’s left of the group (Relf dies aged just 33 in May 1976), through their fall-out Renaissance and Box of Frogs bands, and their continuing reformations with other 1960’s remnants. Hence his book is a ‘rather personal telling’ of their story, more ‘an extended meditation than a strict chronological biography’. But one rich with images of a young Jeff Beck struggling with chord-shapes from Bert Weedon’s ‘Play In A Day’ manual. To them backing a bowler-hatted Sonny Boy Williamson – who could play harmonica with his nose. Then chewing the Benzedrine from Vick inhalers to get high. Listening to Howlin’ Wolf. Improvising extended instrumental ‘rave-ups’ in ‘scruffy jive-hives’. To teasing “Shape Of Things” ‘from nothing more than a riff’ at the Chicago 2120 South Michigan Avenue’s ‘Chess’ Studios, and the backing tracks for its B-side “You’re A Better Man Than I” with Sam Philips at ‘Sun’ in Memphis’. To their inevitably messy end. While his appendix provides a taste-sensitive day-by-day ‘Yardbirds Diary’ covering the period 1st June 1963 to 31st October 1968, an all-too-brief window in time which took the Yardies from ‘Eel Pie Island’ supporting the Cyril Davies Blues All-Stars – through itemised time-fixed dates at legendary venues such as the ‘Twisted Wheel’ and ‘The Marquee’. From the ‘Ricky Tic’ to the Leeds ‘Majestic’. Through the Hull ABC – sharing a tour-package bill with the Kinks and the Ronettes, to manager Peter Grant negotiating the final contract with Atlantic records in New York for what would be ‘Led Zeppelin 1’. You can check out exactly where they were and what they were doing on your birthday, when you lost your cherry, or perhaps confirm the date, time and venue when your lives briefly intersected, and you actually saw them live? Or perhaps you weren’t even born? In which case, all the more reason for buying this fine book, to learn just exactly what you’ve missed out on!

You could be qualified for a free $1,000 Amazon Gift Card.

eToro is the #1 forex broker for new and professional traders.