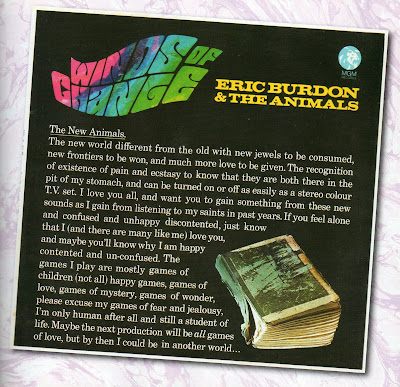 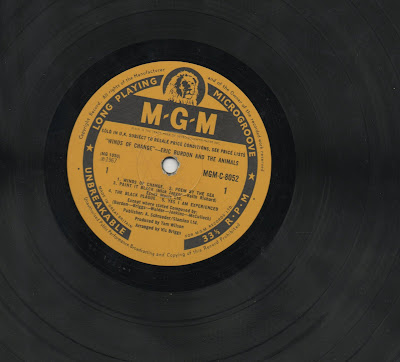 ERIC BURDON &
THE NEW ANIMALS…
AT BEVERLEY ROAD BATHS,
HULL, 1966
I hadn’t even intended seeing them.
I’d already seen the Animals,
and this 15th December 1966 night
the Yardbirds were advertised.
But ERIC BURDON’S NEW ANIMALS
stepped in as last-minute replacements.
I was less than best pleased….
There’s a cat-fight directly in front of the stage. Two teenage trollops punching, slapping hair-pulling and eye-gouging each other, tippling to the floor in a fury of bouffant hair and up-ended micro mini-skirts. An errant boyfriend? Or maybe they’re competing for the post-gig attentions of the band? If so, Burdon barely smiles as he glances sidewise down at it all. Me, I watch, even though I hadn’t intended being here. I’ve already seen the original Animals, at Bridlington Spa Theatre, what seemed like not so long since. They were great, but yes, I’ve seen them already. This December 1966 night the Yardbirds were advertised. Eric Burdon & The New Animals stepping in as last-minute replacements. I was less than best pleased. Admittedly they look different, they sound different too. In fact, they are different. Things had changed pretty radically.
After the implosion of the original group Burdon hadn’t even intended to continue using the name. It was label pressure to stick with the ‘known brand’ that led to the ‘new Animals’ billing. No smart suits. They’re gone. Only drummer Barry Jenkins had survived as a hang-over from the final line-up of the old Animals. His world is a drum-kit (Gretsch) says Eric. Danny McCulloch had been drafted in on bass, and Vic Briggs from the Brian Auger band on guitar. The old hits are buried too, in Eric’s radical new ‘Wind Of Change’. Instead, there’s “Crying Time”, a slow country-ish Ray Charles hit done harmony-style, with an effective yearning edge. They never recorded it, but Ray Charles was a long-time fixture, credited on the album dedication as ‘from whom I learnt so much’. Then he jokes the intro to an Ike & Tina Turner cover as “A Face Like Yours Don’t Come Door-Knocking Every Day”, which lurches and oozes smoothly soulful. The Stones “Paint It Black” too, radically rewired. It opens with John Weider’s haunting violin redrawn in high wide scrawls unravelling from deep Judaic roots through acid-improvisation. Before developing at an angle, with Eric in robust vocal-form inserting a talking break about tripping and falling. He knew something about tripping at the time. It was providing the catalyst for a lot of the transitions, to Eric more than most.
The ‘Winds Of Change’ LP which would arrive the following year (November 1967) came as a confusing reconfiguration to those expecting the regular Chuck Berry John Lee Hooker covers. His new ambitions resulting in, among other diversions, a bleak tone-poem extracted from Edgar Allen Poe’s ‘The Masque Of The Red Death’. Walls move, minds do too. “When I Was Young” reflects those cerebral somersaults, opening with a plunging burr of guitar distortion. From his newly enlightened vantage point he’s looking back to ‘pain more painful, laughter much louder’, before lifting the Dylan metaphor – maybe via witnessing the Byrds version at ‘Monterey’? about being ‘so much older then, when I was young’. The instant-surrealism of its ‘B’-side – “A Girl Named Sandoz” forms a direct LSD reference in itself, ‘very strange things, my mind has wings’. The first of three singles through 1967 it reached no.45 in May, the confessional “Good Times” following all the way up to no.20 in September, then there was “San Franciscan Nights”, led-in with the cod-‘Dragnet’ voice-over, climbing to no.7 in October 1967.
But this night is almost a year earlier, a try-out for the new line-up, a trial-run for the new ideas, and Beverley Road Baths is a long way from Haight-Ashbury. Teenage trollops punching, slapping hair-pulling and eye-gouging each other are a long way from Love Generation consciousness. I’d come expecting the Yardbirds. But it was a time of change, growth, evolution, metamorphosis, new butterflies emerging from old chrysalises. Burdon was already a continuity link, a familiar short stocky fixture in a shifting constellation. As Eric the Head, the Voice of Frisco, he was uniquely positioned to act the interpreter of swirling counter-culture wonders rumoured to be happening on the West Coast. A hippie Marco Polo come back to tell strange and luring tales of far-off psychedelic Cathay. Of course, we knew he’d sweated and drunk with the heavy gang of the North Eastern Electricity Board at Fossway, Newcastle-upon-Tyne. You could kind-of relate to that. He’d been on ‘Top Of The Pops’ too as an integral leading-edge of the first British R&B-wave, and you’d bought the hits. Now he was upgrading into new worlds. A known reference point to help navigate the new cartography by. If this beery Geordie bruiser could turn his life around, just maybe anyone could. I was in there somewhere, keeping up. Making sense, and sometimes contra-sense of it all. It could be argued that Eric was temporarily cut loose from his grounding in R&B, which had provided his gritty authenticity. If so, on the album Eric argues back that Blues is ‘from the whole wide world, deep within the souls of men’, listing his old heroes alongside his new music gurus – Muddy Waters, Charlie Parker, Jimmy Reed, Miles Davis, with Bob Dylan, Jimi Hendrix, Frank Zappa, and ‘when Muhammad Ali gets mad’ – ‘with love, till eternity’. This was an update on “The Story Of Bo Diddley”, which he’d done with the original Animals. I bought the ‘Winds Of Change’ album. Played it quite a lot. Oddly, playing it again now, there are more strikingly impressive moments than I recall. And I remember the cat-fight directly in front of the stage. The two teenage trollops punching, slapping hair-pulling and eye-gouging each other, tippling to the floor in a fury of bouffant hair and up-ended micro mini-skirts. Funny to think those two feuding slappers will be in their sixties now. Wonder if they remember this night as I remember?
Posted by Andrew Darlington at 18:15