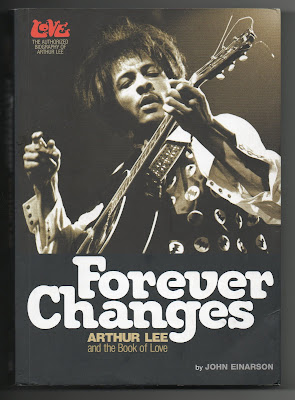 "FOREVER CHANGES:
ARTHUR LEE &
THE BOOK OF LOVE"
by JOHN EINARSON
(JAWBONE)
ISBN 978-1-906002-31-2
Softcover. 334 pages
www.jawbonepress.com
The first three Love albums stand up there with the greatest trilogy of the Rock era. Their debut gifts the Byrds folk-rock template a hard garage-band edge, ‘Da Capo’ adds restless experimentalism, taking the group into the lush lyricism of ‘Forever Changes’. When, after his long decades of darkness, Arthur Lee played live at Leeds’ City Varieties, he confided he was working on his memoirs. That he died before they were completed is generously ameliorated by John Einarson’s access to the manuscript-in-progess, drawing italicised fragments into this first fully authorised biog. Young Arthur ‘picked up on music faster than an ape can peel a banana.’ Born Arthur Porter Taylor in Memphis, he became Lee through his LA stepfather. Of mixed-race heritage, ‘too light-skinned to be black and too dark-skinned to be white’, he was indulged as a kid, and something of the schoolyard bully. He met Johnny Echols at school where they formed LAG, the LA-group in the same way that Booker T’s band was the Memphis Group, and they cut a debut single – ‘The Ninth Wave’, at Phil Spector’s Gold Star studio, for Capitol, Nat ‘King’ Cole’s label. Then the owner of Revis Records brought in a young guitarist on a Little Richard tour stop-over to play on Rosa Lee Brooks’ sessions for Arthur’s song ‘My Diary’ in 1964. Although the single was a regional hit for which he ‘never received a penny’, the session was a useful connection to James Marshal Hendrix, a ‘false start’ on their way to ‘the everlasting first’. It’s tempting to ramble such intriguing detail. There’s plenty here. About why Love’s unwillingness to tour stalled their career. About the subsequent lesser line-ups. Then Lee’s personal crash. Until his wonderful renaissance probably saw his back-catalogue played live with greater fidelity than the classic personnel could ever have mustered. It was a privilege to be there. This wonderful book captures it all, chord on chord.
Posted by Andrew Darlington at 20:36