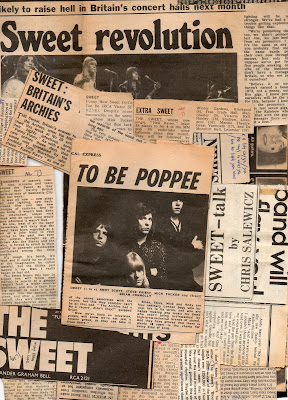 Sweet performed their last live show soon after this appearance in Wakefield, at Glasgow University on 20 March 1981, before breaking up. There would be subsequent partial re-unions with different line-ups, but this was essentially the end of the original Sweet story-arc.
Posted by Andrew Darlington at 18:44

Thankyou for this, I also saw Sweet on the last tour at Nottingham´s Rock City and thought they were great.

Didn't had the chance to come over to the U.K. to see them live in action. But been a fafn since day one and collected so much of the band. Now I have all the 1981 shows on cd, even this one. and Yeah they sounded fafntastic. I have afacebok group mick tucke rdrums where I share some of my stuff with fans. I have recently uploaded the drumsolo of Wakefield. and added a bit of the story you wrote to it. thanks for keeping the memorie alive!