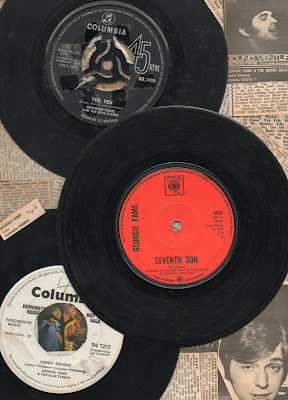 Gig Review of:
GEORGIE FAME
at the ‘Leeds Folk Festival’,
Temple Newsam Park, Leeds
Re-read that. George Fame? Folk Festival!?!? Yeh Yeh. He’s confused too. ‘Wasn’t quite sure if I’d come to da r-a-a-a-h-t gig tonight’ he slurs laconically. Slouching out to encore in creased fawn trenchcoat and scuffed brown slip-on casuals. He pours down onto a Unigate milk-churn snuck behind a battered Hammond organ flagged with peeling decals and fading varnish, and finger-dances out the first riffing chords of James Brown’s “Night Train” in a deliciously intoxicated rush…
He might not be a droppable name – ain’t been for a decade-&-some, only new-Funk pretenders JoBoxers are smart enough to make the right connections, and revamp his early B-side “Fully Booked”. And sure, watching him backstage accosting strangers to bum cigs you wonder whether this really is the guy who played sessions with Gene Vincent, who did those scorching ‘Flamingo’ Sound Ventures, recorded these albums with the Count Basie and Harry South Big Bands, and whose Blue Flame line-ups have off-&-on numbered some of the UK’s most stunning jazzers. He cranks out the archetypal “Green Onions” he used to gain kudos for in 1966, and unravels more of that same basic roll-call of standards – but his song selection still tells tales. It fuses Blue Beat, R&B, early Rock, Motown, and other references dating clear back to Hoagy Carmichael (through Ray Charles’ “Georgia”) – in fact, it touches all the ideologically correct influences ‘New Musical Express’ tell us we should be impressed by. And they all come smoothly laced with little quotes, motifs, and figures from innumerable sources fed as effortlessly, as seamlessly, into the flow as soda slooshing from a siphon. Despite the sartorial seediness and ambiance of a down-at-heel pub combo the base is a jazz fluidity that the likes of, say Animal Nightlife or the late Rip Rig & Panic’s might envy.
There’s pulsing solos from bearded bassist Jim Richardson on “Roadrunner”, and burlesque cymbal shimmers from Dave Cutler igniting Louis Jordan’s “Saturday Night Fish Fry” (‘one of the first Rock ‘n’ Roll songs ever’), but they all gather in and focus on Fame’s keyboards. The one-time Clive Powell needs no ostentatious flash, and offers nowt too fancy, but his cool slick understatement is honed to intuitive ESP by that decade-&-some gigging. He breathes familiar material without conscious thought. Loping through a slow Ska “Uptight” while playing the milk churn like conga’s, doing a New Orleans “Blueberry Hill” dripping with Fats Domino, “I Almost Lost My Mind” (‘the only C&W song I know’), and the sole original – his no.1 hit “Get Away” which stands up unexpectedly well in such stylish company – and all the while he’s off-handedly flashing group in-jokes at guitarist Ronnie Johnson around superb bragging sax runs from (‘grooveroonie my man’) Steve Gregory… Charts and trends exist in some parallel universe, but in the meantime, inbetween-time, consistency and time-served craftsmanship ain’t no bad thing.
Posted by Andrew Darlington at 13:57

Thank you for the info. It sounds pretty user friendly. I guess I’ll pick one up for fun. thank u

Apartments for Rent in Leeds


Thank you for posting interesting information
Heathrow to gatwick taxi

Trying to find the Ultimate Dating Site? Join to find your perfect date.