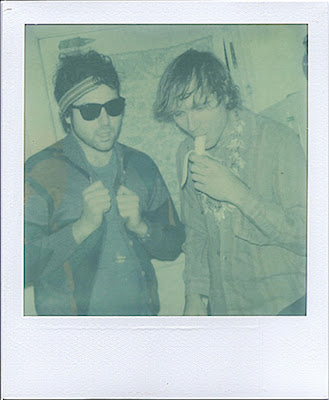 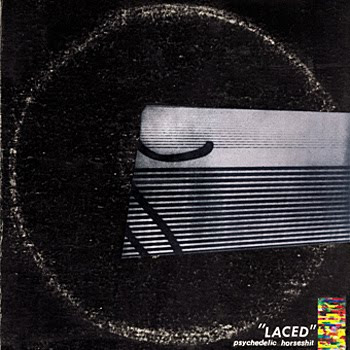 Album Review of:
'LACED' by
PSYCHEDELIC HORSESHIT
(FATCAT FAT-SP21) www.oli-fatcat.com
Mark Tulin of classic acid-punk psycedelicatessens Electric Prunes died 26th February 2011. Bands had dumb names in those days. Not like now. Not like what, for purposes of delicacy, we’ll refer to as Psychedelic HS? Are they the answer to the cultural impasse currently stalling music? – well, maybe. Or just a deranged curio. Laced is a brain-storm of contagious madness about ‘getting lost in space’, which could mean anything – inner or outer space, or even a retro-TV sci-fi clunker. Neolithic percussion. Techno-primitive effects with zero sonic bling. A dark and tumultuous lo-fi four-track sound with visceral analogue tweaks that hit you like a truck. It’s what they used to call experimental electro, the rawest cuts of Cabaret Voltaire spliced with tape-snippets salvaged from the Psychic TV studio-floor. No narrative. No conclusion. No obvious explanation. Just a mounting prankster energy that neither ceases or peaks. "Tropical Vision" even ends with vinyl surface-hiss. And although the hideous cacophony of "I Hate The Beach" lapses into the soothing spacey ebb-and-flow of symphonic "Automatic Writing", the parts do not always cohere into anything as normal as ‘songs’, not that they’re intended to. "Another Side", with its harmonica and treated vocals is almost a song. But as a whole, it’s more a clink-clank sound-lab that deconstructs music, and reassembles it into something approaching ‘caverns of noise’. ‘What you lack is a sense of reality’ complains a sampled dialogue-voice. ‘What’s so wonderful about reality?’ snaps back the retort. Which pretty much sums up the Psychedelic HS perspective. This noise annoys, but addictively so. Matt Whitehurst (guitar, keyboards, vocals) and Rick Johnston (percussion) came together in Columbus, Ohio in 2006. There’s also sometime bassist Jason Roxas whose current status is uncertain. There was a 2007 LP, Magic Flowers Droned (Stiltbreeze), plus a cluttered scatter-bomb of EPs. Now, this comes in CD, digital or vinyl formats. It’s crappy, smudged, fractured and murky, made up of distorted jump-cuts that swoop in from unexpected angles. It uses ‘infinity sirens’. It has no obvious commercial potential. There are outsiders, and then there’s Psychedelic HS. They exist entirely within their own self-contained universe where all this makes some kind of sense. Not so much an alternative dialect to the rest of Indie, as a different language entirely. What Mark Tulin would’ve thought is anyone’s guess, but they said pretty much the same kind of thing about Electric Prunes in their day. This is a frightful warning of the terrible derangements inflicted by the uncontrolled discordant use of noise. Don’t do it kids. Leave it to the experts.

The PR sheet says 'currently existing as the duo of Matt Horseshit (vocals / guitars / drum programming / harmonica / keyboards) and Ryan Jewell (drums / percussion / keyboards), 'Laced' also features a guest appearance by Times New Viking's Beth Murphy, who sings on 'DOA'. Created in Columbus throughout 2010 (with two tracks dating back to almost year before that), the album was recorded in a variety of basements, practice spaces, living rooms, and bathrooms using almost no amplifiers and a beat up 1970's Teac reel to reel. No longer mining corrosive, lo-fi dysfunctionality in two-minute adrenaline hits, 'Laced' is the first record to see them consistently stretching things out and breaking new ground.'

PSYCHEDLIC HORSESHIT WILL BE TOURING THE UK LATER IN THE YEAR.
& a further album, compiling the best of their previous material will be released by FatCat in November. Contact: tones@indian.co.uk or ash@indian.co.uk
Posted by Andrew Darlington at 14:03

Looking for the Best Dating Website? Join and find your perfect match.