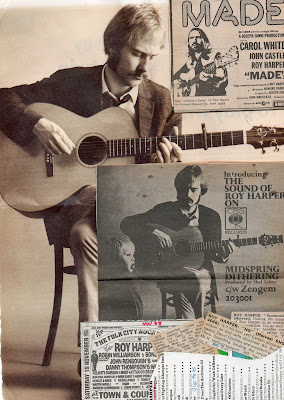 Gig Review of:
ROY HARPER
at the ‘Civic Theatre’, Leeds
10th November 1989)
‘I’m seeing things tonight’ leers Roy Harper. ‘Look at that rat’ (pointing at an arbitrary area of the stage between jack-leads and amp). ‘THAT RAT IS DEFYING GRAVITY!!!’ His laughter is deranged. I saw Roy Harper twenty years ago at Hull ‘Spring Street’ Arts Centre where he leered ‘I’m not quite is possession of my brain tonight’. His hair’s a little Shorter now, a little sparser too, he claims to be under the influence of nothing stronger than Zubes, but he still gives the impression of total disorder. Tonight is one of those nights where they frisk the audience on the way in, looking for drugs – and if you don’t have any, they give you some. An old joke, but it’s an old situation. Intelligibility is not really the point here.
It’s a large theatre with echoey resonance. He’s a static figure on a tubular chair in the shifting spots. The only movement his right hand strumming, or when he leans over to change guitars during his Sex ‘n’ Drugs ‘n’ Folk ‘n’ Roll talk-overs. ‘Why am I thinking faster than I’m speaking tonight…?’ he leers. Between songs that tend to fuel the disorientation rather than clarifying it. The Rock Machine turned Roy Harper on, with CBS promoting him as part of its late-sixties incipient Underground package. A gateway-drug to another kind of otherness. When that stalled he got to play himself in a movie (with Carol White in Joseph Janni’s 1972 production ‘Made’), which tided him over – subculturally speaking, until his adoption as Led Zepplin ‘heavy friend’ and ‘holy fool’ on their “Hats off to (Roy) Harper” on ‘LZ3’. His life is the narrative. His albums punctuations along the way. This tour represents probably his fourth or fifth career phase, depending on whether you include the sheep-kissing tabloid notoriety. This is the CD period. Roy Harper on CD! The very concept sounds like a Folk-Joke opus, but they’re all here on the merchandising trestle – all his Flashes from the Archives of Oblivion, between the tour T-shirts and the back-issue of the ‘Roy Harper’ fanzine. When ‘Sunday Times’ critic Derek Jewell wrote ‘Harper is to Britain what Joel and Springsteen are to America’ he seems to have underestimated Roy’s tribal significance. Appropriate to the CD re-issues he meanders disjointedly between, around, and sometimes in the middle of songs about his ‘Q’ magazine interview, allegations of Bolivian Marching Powder abuse, about ‘horizontal dancing’ to a cricket commentary, the Stonehenge battles, cocaine on the Stock Market, about his fear of ‘drifting off into space in a capsule of my own generation’, and about masturbation – ‘one of the more sensible ways of passing five minutes’. He also sings “When An Old Cricketer Leaves The Crease” with a melancholy weariness scuffed-at-the-edges tone (‘when the day is done, and the ball has spun, in the umpire’s pocket away, and all remains, in the groundsman’s pains for the rest of time and a day’), Dylan’s “Girl from North Country”, some pseudo-profound eco-platitudes about two-thirds of the world starving – and the other third not doing too well, and a powerful set-newcomer “Black Cloud of Islam” in sharp retaliation to the Salman Rushdie must-die fatwa campaign. The strength of emotion is still compelling, the intensity of his playing – sparsely open-tuned acoustic, or slightly rippling phased from foot-pedal, is as incendiary as ever. As they say, in this continuum, the past is not dead. Hell, it’s not even past. He’s still the Looney on the Bus, despite the frightening trend turn-overs of the twenty years that he’s stood aloof – or aside from, the mainstream… He’s having some alterations done to his house. There are twenty-six clauses of regulations to which such alterations must comply. He muses distractedly about perhaps writing it up into his own ‘Alice’s Restaurant’. ‘Twenty-six clauses, yeah – THAT’S TWENTY-SIX VERSES!’ Each one of them would be absurd, idiosyncratic, but still a Work of Heart.
Posted by Andrew Darlington at 11:17