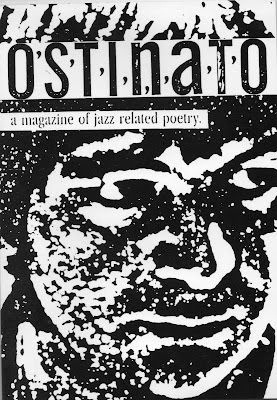 BEBOP MAN/
‘LESTER LEAPS OUT’
‘there is no ‘what should be’
there is only what is’ – Lenny Bruce
&, finally washed ashore,
playing that same Prez solo
a litany in eerie phrasing,
a skylight room, eaves crazy with birds,
tenor-breath patterns of light
cobweb the window, reflecting
salt-white breakers, & beyond,
sky oozing, dawn gull-flecked &
ghosted melancholy with ‘40’s jazz.
autumn month rates are low, but there’s work,
Bars, Clubs and Music Lounges by the harbour,
thru promenade gardens drift sad snapshots
smiling silences at each other, and
a boy crooked into the wind, leper-pale
black hair misting, like John’s used to…
& he watches, fingering a sax on time’s curve
holding wistful chords that can xerox 1956
& a Ford Pop south from a cellar residency
that curls up and dies with september, John saying
‘Hey, Stockholm, a guy, a club, promise of work’
kerbcrawling down the dissonant A1 with the
rot-stink of tyres, stitching notes at the
traffic-flow, finger-sweat printing the bell,
aftertasting John’s saliva on its mouthpiece
and on his body…
&, finally washed ashore here, he
quits the horn in elegant slouch,
out thru 2 sets of Rooming House doors
into a frosty knife-edge of wind,
crouching deep inside faded anorak
in a numbing void of sensation
following the boy for no real reason,
poignant jazz soundtracking glimpses in his head…
awaiting a ship with Band vacancies that never come
strung out in low-rent Bars, stoned on Espresso and
fewer coins, Hard Bop on Frith St, kissing his nipple
through shadows, ‘Lester Leaps In’ with last few £’s,
huge envious eyes yearning Prez-tones, as options
decay, until John ships out for Tangiers, leaving
only a chord sequence biro’d into the liner notes
& a Bebop man cut loose in the now,
crazy with memories,
watching a boy, and
the wash of ocean thru
the vague discontent of
midday’s frost-white waves…