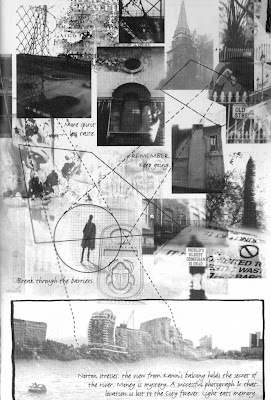 Book Review of:
‘SLOW CHOCOLATE
AUTOPSY’
by IAIN SINCLAIR & DAVE McKEAN
(Phoenix House ISBN 1-861590-88-1
£16.99 - £9.99 p/back)
Fragmentation. Bi-mediality. A spread of forms. These are events in the lives of Norton. Norton or ‘Notron’. As in ‘Not Ron’. The text is spattered and ripped with graphic novel extracts. The graphic novel spliced and intercut with intrusions of text. Norton comes adrift in time. But is trapped by it. He’s there in Deptford (or Debt-ford, as in ‘till Deptford us do part’) for Christopher Marlowe’s death. Then he’s there in the East End for Jack The Hat’s brutal murder. The cover-blurb says so. The plot is less direct. More apparitional. Packed with ill-defined moments caught in entropy enclosures, where ‘a weasel crunching a mouse’s skull is amplified into a collision of icebergs’. And it is self-aware in the post-modern way of things, as Norton rehearses ‘the instructions he will have to write, so that McKean will be able to make a sequence of drawings... a stutter of frames’, or when he puzzles over ‘how to muzzle Anthony Burgess’ (who also did a factional Marlowe). His London is an unedited city, fit only for Comic-Book fiction or Direct-to-Video movies. And he transcribes everything. What he calls ‘the trivia of the real’. The Dysfunks, Petty Crims, Chaos Punters, Sewage Surfers, and even esoteric angles on the Mayans take on football as a ‘fate game reflecting demonic cosmology’. While the text spreads to weave around the lives that intersect Norton’s. Lives that use him as a nexus. For them there is no Last Exit from Deptford.
Norton is also a drug-dealer’s alias lifted from William Burroughs ‘Junkie’. A final collage reproduces a page of the Beat Generational docu-novel as a Lit clue. Other references include the unacknowledged use of Bob Shaw’s ‘Slow Glass’ as ‘light came out of him at the wrong speed’. There’s probably more I’ve missed. Iain Sinclair is a poet. You can tell. He writes lines like ‘each breath is a sucking sound. A criminal thirst drinking roses from the flapping wallpaper of memory bedrooms’. Stuff like that. Dense and rich with layers of multiplicity. He did ‘The Kodak Mantra Diaries’ in London in cahoots with Allen Ginsberg. Ginsberg and Burroughs had some sex together. They’re both dead now. Norton is still a time-surfing echo drifting in and out of texts and decades. McKean, a some-time Neil Gaiman accomplice, has a charge-sheet that runs from Tori Amos album sleeves all the way to Batman’s ‘Arkham Asylum’. And he’s Sinclair’s perfect foil, sampling and sound-biting his art into precision-blurring treated assemblages that dazzle and confuse. Like the prose it interrupts. This is a novel. But it is one of fragmentation. Bi-mediality. And a spread of forms.

It's been said that any bettor needs to look at this,

Watch this now or stop placing bets on sports...