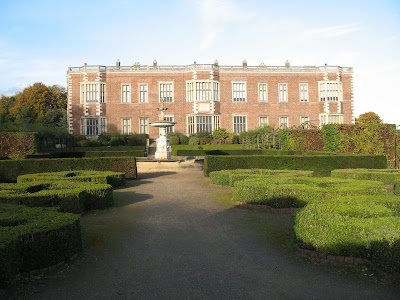 ‘A VERY BIG HOUSE IN
THE COUNTRY... WHERE
THE BRIT-BRATS BLUR...!’
BLUR (and friends)
at Temple Newsam Park, Leeds
Perhaps he read the interview too. You know, the one where Noel Gallagher tries to nail the BritPop Wars forever. Oasis, he brags, still play “Roll With It” live. Blur, by contrast, are too embarrassed to do “House In The Country” any more. ‘Nuff said. Perhaps Damon Albarn read that interview. Because tonight... Blur do “House In The Country”, ‘there’s a Big Country House over there, in’it? So it’d be stupid not to do it’. And indeed there is, Temple Newsam’s huge Tudor-Jacobean monstrosity. But if you think you remember Blur first time round, you’re probably wrong. Damon wears a blue M&S shirt with a LATE NIGHTS logo. An anti-statement. Alex James manages an image from Marianne Faithfull’s ‘Hang It On Your Heart’. And they’ve got a horn section too. But Stadium Rock? Naw. Life’s not long enough for songs over three minutes. And together they contrive an endearingly deliberate low-fi ‘if I had a set-list I’d know what was going on...’ dumbing-down clear through to the line of incandescent thunderflashes irradiating the night, immaculately timed to the OOO-OOO’s of “Song No.2”.
Call me a ‘professional cynic’, but it occurs to me that this could, perhaps this should be the Stone Roses on stage tonight. Back in the arse-end of the 1980’s, with Blur as baggy also-rans scraping a chart presence with “There’s No Other Way” (no.8. 18th May ‘91), and Noel Gallagher Roadying for Inspiral Carpets, it’s the Roses luminous harmonies that most clearly define the future. But as Ian Brown / John Squire’s band get hung up in various legal limbo’s, and the Inspirals implode when their ex-Roadie begins selling more records than they do, leaving only a chalk outline in Indie-Pop, Blur merely persevere. Probably all that’s now consigned to the musical equivalent of adolescent fumbling in each others underwear, but long after we’d given up on Blur, they never gave up on us. And, just a thought, but if Noel had offered “Supersonic” to his then-employers instead of to his ‘kid’s’ band, could it be Tim Hingley chatting to Tony Blair at no.10, and ‘Be Here Now’ by Inspiral Carpets? Perhaps not. In the meantime, beneath all that purposeful negative-imagery, it’s Blur that catch the pulse. Their mindlessly contagious Euro-Disco take on ‘Love in the 90s’ is given extra-texture by their seeing it as opportunistic hedonism numbing the ‘avoiding all work’ because ‘there’s none available’ angst. Perhaps they’re not that good, but they’re not that bad either. Like the Kinks, or perhaps Madness, they can sometimes, almost incidentally, freeze-frame the temperature of what it’s like to be English at this exact moment now, in all its dull desperation and raging calm.
Meanwhile, is this the way the future feels? 40,000 people in one field? There’s so much sweat it’s a soakfest. But there’s that English politeness too. Still. That ‘excuse me’ ‘Oh, sorry pardon’ thing even to the height of the crush. Sure – there’s Wayne and Waynetta’s as well. ‘It’s a sign of the times, girl, says the song on the radio’. If we listened to that kind of song. Which, of course, we don’t. Indie fans are obsessive, oddly inflexible and rigid, with peculiar personal habits. They’re a strange, unpredictable and highly tribal bunch. Normal is what everyone else is, and you’re not. Not. So it’s great fun to be rude about them. Earlier, Stereophonics go for sex, drugs and oral hygiene. They do “More Life In A Tramp’s Vest” in three-way stereo, then “A Thousand Trees”, to close with Kelly Jones’ rousing ‘LEEDS UNITED FOR THE PREMIER LEAGUE!’ Er – aren’t Leeds United already in the Premier League, or is that a sly dig implying that their status there is at risk? Not that the assembled Shiny Happy People seem to care. While working that out we watch Hurricane #1, harder than Andy Bell’s former Ride, with their “Faces In A Dream” raging routine power-chord Rock. Then they do “Chain Reaction” – ‘I saw my baby crying / I told her, baby, don’t cry’. Pimple-brained advice direct from the Claire Rayner handbook of human relationships. If the lyrical intelligence quota falls much lower we can plant it in a hanging basket and feed it Baby Bio.
Until Blur open with the hard minimal riff of “Beetlebum”, the sound that dragged them from that strange kind of Old Sit-Com going the way of old Rock Bands retrophilia, into the warped present. Someone says ‘she sucks your thumb / and makes you come’ – why thumb? Because ‘cock’ doesn’t rhyme. If you think you remember Blur first time round, you’re probably wrong. Tonight they’re bitter-sweet symphonies of flavour, a treat and a disappointment at the same time. They do “Stereotype”, “MOR”, “VIP”, then go as far back as “Albert” from an album Damon mis-titles ‘Modern Life Is A Load Of Shit’ (1993), and back even further to an unexpectedly powerful “Sing” from their debut long-player (‘Leisure’ 1991). Until ‘one of those sad love songs’, turns into “The Universal” done with full glitterball effect. And on... “Parklife” might now be Nike-ad TV-Bubblegum with an Eric Cantona walk-on. And you can call me a ‘professional cynic’. But Blur at Temple Newsam? I’ll just say definitely. Maybe.