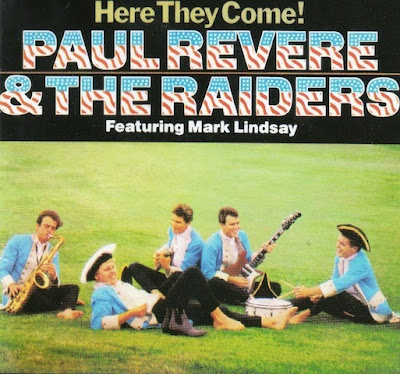 
In the history books of the American War of Independence, ‘Paul Revere’ is immortalised as the patriot who made the famous ride announcing ‘The British are coming!’ During the mid-sixties his namesake was performing the same function in Rock ‘n’ Roll. Like – say, Tommy James & The Shondells, they scored a string of massive American hit singles, while unlike Tommy James, not one of them made the slightest impression in the UK. Yet they were fun opportunistic populists with a sure sense of catchy riffs. Their first hit “Like, Long Hair” happened as early as 1961, but as the English invasion exploded they were perceptive enough to angle their sound accordingly. They supposedly did the original cut of “Louie, Louie”, but lost out to the Kingsmen version on the chart, although both were done in the same ‘Northwest Recorders’ studio in Portland, Oregon. It’s included on their third album – ‘Here They Come’, produced with Terry Melcher in 1964, amid a patchy grab-bag of covers associated with English-invasion bands, some done ‘live’, although technically “Do You Love Me”, “Time Is On My Side” and “Money” were not British at all, but American R&B sides. Only “Something” is a shameless stand-out, a magnificently cheesy teeny-bop power-ballad as immaculately targeted as it is irresistibly effective.

Later, recorded with what is considered their ‘classic’ line-up, their fifth album – ‘Midnight Ride’ in 1966, up-powers into “Kicks” which is trash garage-punk at its finest, a Mann & Weil anti-drugs infotainment fuelled on the artificial energies of Byrds guitar-twang, rattling tambourine and driving chorus. They add surf-harmonies to “Little Girl In The Fourth Row” which stokes romantic audience-fantasies that pony-tailed vocalist Mark Lindsay is serenading directly at them, a ploy as cynical as McFly or the Jonas Bros would ever get. Then they set the template of Boyce & Hart’s “I’m Not Your Stepping Stone” for the Monkees, then the Flies, Sex Pistols – and even Ant & Dec to replicate. Finally tipping the album over into the voice-over kitch of “Melody For An Unknown Girl”, measure for measure, everything you most love about sixties pych-beat is here.

Although they seldom got better than this, the hits went on. I’d personally rate “The Great Airplane Strike” (US no.20, October 1966), “Ups And Downs” (US no.22, March 1967) and “Him Or Me, What’s It Gonna Be?” (US no.5, May 1967) as up there with the best sixties Pop-Rock singles ever. Their regular slapstick antics on Dick Clark’s ‘Where The Action Is’ – and its sequels ‘Happening ‘68’ and ‘It’s Happening’ also helped maintain their high-profile visibility. “Indian Reservation (The Lament Of The Cherokee Indian)” eventually provided their only no.1 as late as May 1971, despite it having started out as a Mark Lindsay solo project and despite it being nicked from an earlier UK hit by Don Fardon. By then changing tastes, and changing personnel had rendered them unfashionable. Beatles’ PR-man Derek Taylor who also handled the Raiders’ press admitted that although they had become ‘irrelevancies’ there were still some ‘nervous citizens (who) felt reassured some good safe things never changed.’ They filled that role as headliners through the rest of the seventies, well into the eighties, and survived comfortably into the decades beyond.
Posted by Andrew Darlington at 20:16

Well then. It seems I have stumbled upon a blog that is not about parenting. Yay! Keep doing what you are doing!