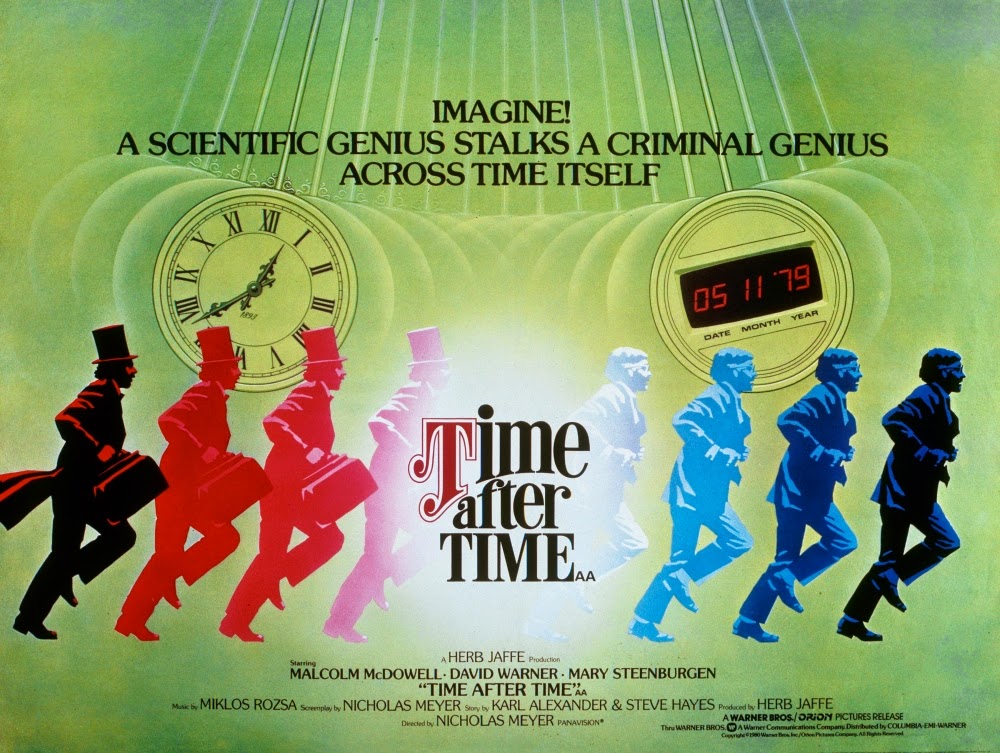 ‘ONE MORE TIME
FOR TIME AFTER TIME’

A RETROSPECTIVE
OF THE NOVEL
‘TIME AFTER TIME’
BY KARL ALEXANDER


You’ll probably see, or already have seen the movie ‘Time After Time’ (August 1979), currently doing its late-night re-runs on various digital TV-channels. So you’ll probably know the plot concerns HG Wells – played by Malcolm McDowell with moustache, inventing a real Time Machine, said Time Machine being hijacked into the future by Jack The Ripper – portrayed by David Warner, and Herbert George’s pursuit of this villainous quarry into today, that is – into 1979. McDowell, in a more sympathetic role than we usually expect from him, is as excellent as ever. 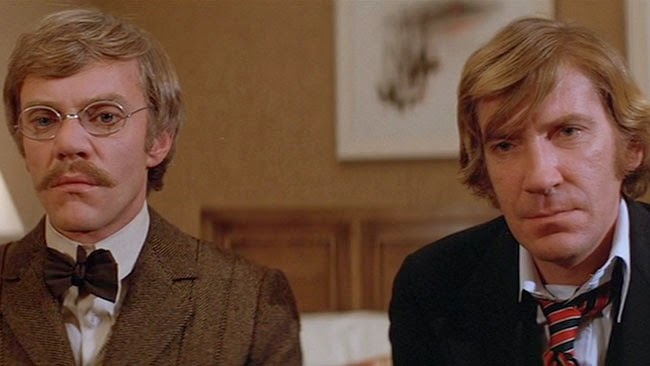 And it’s a feel-good soft-centred serial-killer thriller balanced with humour and romance, as Wells and his former friend compete for possession of the ‘return key’ of the time machine, which has become an exhibit in the San Francisco museum. But despite the surface protestations ‘Now A Major Film’ the Karl Alexander book tie-in, purportedly expanded and fleshed out from director Nicholas Meyer’s original screenplay, seems to lie more in the genealogy of the ‘Star Trek’ merchandising-novel, or the ‘ET’ novelisation. Although the full interactions between and betwixt film and book are a little more complex than that, it’s still difficult to judge it as a real work of Science Fiction, as distinct from a mainstream movie spin-off. If viewed as the former, the diligent critic would be conscience-bound to point out that, although playfully intriguing, the core-themes are by no means original.

As early as 1967 Robert Bloch wrote a first, and far more chillingly convincing Ripper-projected-into-the-future story – “A Toy For Juliette”, followed that same year by Harlan Ellison reworking the theme in his ‘Dangerous Vision’ “The Prowler In The City At The Edge Of The World”. Christopher Priest wrote HG Wells as a character into his enjoyable fantasy ‘The Space Machine’ (1976), while Jherek Carnelian converses effectively with a sceptical Wells on the topic of Time Travellers in Michael Moorcock’s ‘The Hollow Lands’ (1974). Moorcock also evokes a far more tactile picture of Victorian London than Alexander’s second-hand American view condescendingly-affectionately extracted from previous Hollywood imaginings.

Similarly there’s little development of the Time Travel concept. Needless to say, there’s none of the temporal conundrums mapped out by Isaac Asimov (‘The End Of Eternity’, 1955) or Poul Anderson (‘The Corridors Of Time’, 1966). While none of the ideas are taken to the staggeringly complex consummation of Barrington J Bayley’s novels (‘Collision With Chronos’, 1973 and ‘The Fall Of Chronopolis’, 1974) with time spliced, looped, overdubbed, phased, and wiped clean like so much recording tape. But that is never its intention. 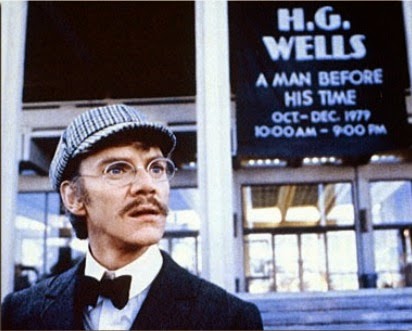 Karl Alexander, for example, has Wells snatched out of 1893 London into what the DVD blurb calls ‘The Wildest Chase Of The Century’. Once in a 1979 San Francisco of McDonalds and Hari Krishnas, he sees the ‘Star Wars’ movie. But there’s no suggestion that, so inspired, he returns to the nineteenth-century to write ‘War Of The Worlds’, published just five years later. Because that’s not Alexander’s purpose – because this isn’t a real SF novel, surely it’s more a movie merchandising vehicle aimed at a wider public? So it should escape such sectarian scrutiny. The Time Machine is a plot device, just as much a gimmick as the modified DeLorean in ‘Back To The Future’ (1985), useful only in that it brings the characters together in one space-time location. A Disneyfied fantasy around which he builds a mildly comic, charmingly romantic, highly entertaining novel of ‘time-crossed lovers’, crime detection, and gentle satire. Isn’t that enough? Can’t spin-offery also be creative? After all, Brian Aldiss, Michael Moorcock and Simon Clark have all contributed to the ‘Dr Who’ library of tales. 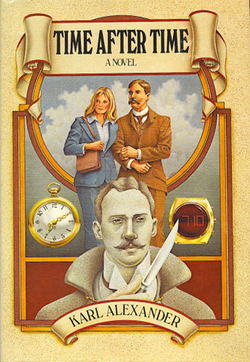 In that he has any motive other than entertainment, Alexander’s main concern is to mirror the Jekyll & Hyde nature – to subsume yet another Victorian-lit archetype, of technological ‘progress’, seen through the reactions of his two protagonists. A duality represented by Wells’ idealistic optimism contrasted with John Leslie Stevenson’s (the Ripper’s) nihilistic negation, ‘ninety years ago, I was a freak’ he protests, ‘today… I’m an amateur.’ The morally ambiguous muddle of 1979 is competently delineated. The accuracy of Wells’ naïve enthusiasm occasionally even jolts our own carefully nurtured cynicisms. He sees a culture that has ‘seen it all, has done everything, but doesn’t have the time to reflect upon one iota of it.’ Although we’ve yet to achieve the scientific utopia he anticipated, Wells alone recognises the immense strides in social progress that have been made, but which it is so fashionable to ignore, counterbalanced by the palliative of the price paid. Perhaps that price is really not as high as we imagine?

Hindsight nudges forward the corrective that Wells’ own perspective shifted considerably in later life, reaching its darkest expression in his final bleak tract ‘Mind At The End Of Its Tether’ (1945). But the Ripper’s vision, as devil’s advocate, is equally laser-bright, recognising that 1979 reflects more exactly his own philosophies. He prefers Alice Cooper’s mayhem to Fleetwood Mac’s soporific – never having got as far as Sid Vicious!, and he feels slighted by Charles Manson’s greater notoriety. He plans to use the Time Machine to literally carve his manifesto clear across the ages, by ‘surprising Cleopatra in her boudoir. He could be assaulting and butchering her voluptuous body before Anthony ever reached the shores of the Nile. A few minutes further along the Fourth Dimension, and he could be sodomising Helen of Troy… Mary Magdalene could be his too, raped and slaughtered before Jesus ever had a chance to save her wretched soul… and he could violate and murder Joan of Arc.’ Fortunately, he never gets to carry out this catalogue of vile deeds.

There’s tension and fast-paced chase-sequences as Stevenson abducts Wells’ bank-teller love-interest Amy Catherine Robbins (played by Mary Steenburgen), and tries to use her to bargain for possession of the time machine’s control key. Wells, in deerstalker hat, is mistakenly arrested on suspicion of the murder of Amy’s co-worker, who has fallen foul of the newly-styled ‘San Francisco Ripper’. Wells even uses the machine to take Amy on a three-day hop into the future, where she’s shocked to see a newspaper headline reporting her as the Ripper’s next victim. There’s a final confrontation around the machine itself. ‘You have my word as a gentleman’ promises the Ripper, before reneging, ‘I would have expected that you’d noticed by now, that I am not a gentleman.’ The struggle results in him being hurled endlessly into the future, while Wells decides to return – with Amy, to his own time, where he intends to destroy his invention. It has too much potential for evil to be allowed to exist. 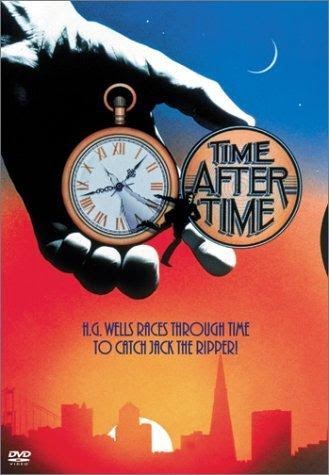 One reviewer adjudged Karl Alexander to be a keen student of all things Wellsian. And that Nicholas Meyer’s screenplay was actually based largely on his ‘uncredited’ novel, which was unfinished during the time of filming, incorporating a story by Alexander, and by Steve Hayes. So definitions become more blurred than on first assumption, with some elements of creative interaction at play. Yet I’d instead gauge the research to be more the result of a hasty speed-reading of a Wells biography. No matter, the characters are drawn well enough to induce reader-identification, and they function well in their roles as ciphers. Wells becomes something of a bumbling eccentric, his socialism conveniently diluted – bad for the US market! While his lover – Amy, was real, even if she did originate in Putney and not San Francisco.

Alexander is on more shaky ground with his Ripper speed-reading, even if one concedes that some scene-shifting was necessary to compress the two protagonists into the same timeframe. In fact the Ripper’s last attributed murder was on 9 November 1888 – five years before the novel’s setting. Similarly, the murder detailed in the opening chapter – that of Elizabeth ‘Long Liz’ Stride, was only his third victim anyway. However – despite being out of time, the setting for the event is carefully and accurately described, clear down to the witness-authenticated ‘International Workers Education Club’ meeting nearby, overhead singing the “Internationale”. Alexander’s accuracy is only undermined by his description of her ‘butchered’ corpse. Beyond the fatally slashed throat, Liz Stride’s body was not mutilated. But what the hell, gory murder is a reliable plot ingredient – and it IS an extremely entertaining novel. Not one to change your life irrevocably, but it will pass an hour or two most enjoyably, and comes cheaper than getting the 2008 Warner DVD from Amazon.

You’ve probably already seen the movie on its late-night re-runs on various digital TV-channels. Borrow a copy of this book some time too. 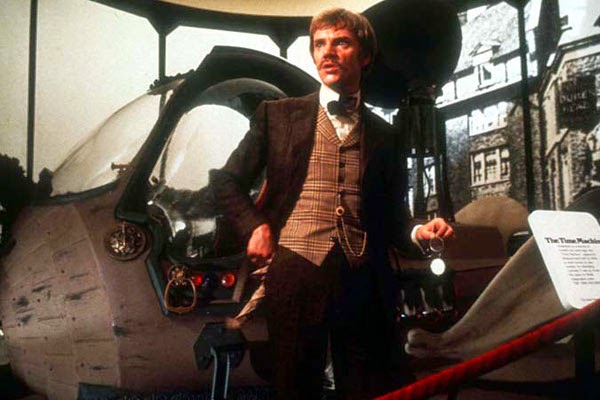 Posted by Andrew Darlington at 19:32

Anybody else wants a FREE MC DONALD'S GIFTCARD?

You could be qualified for a complimentary $1,000 Amazon Gift Card.