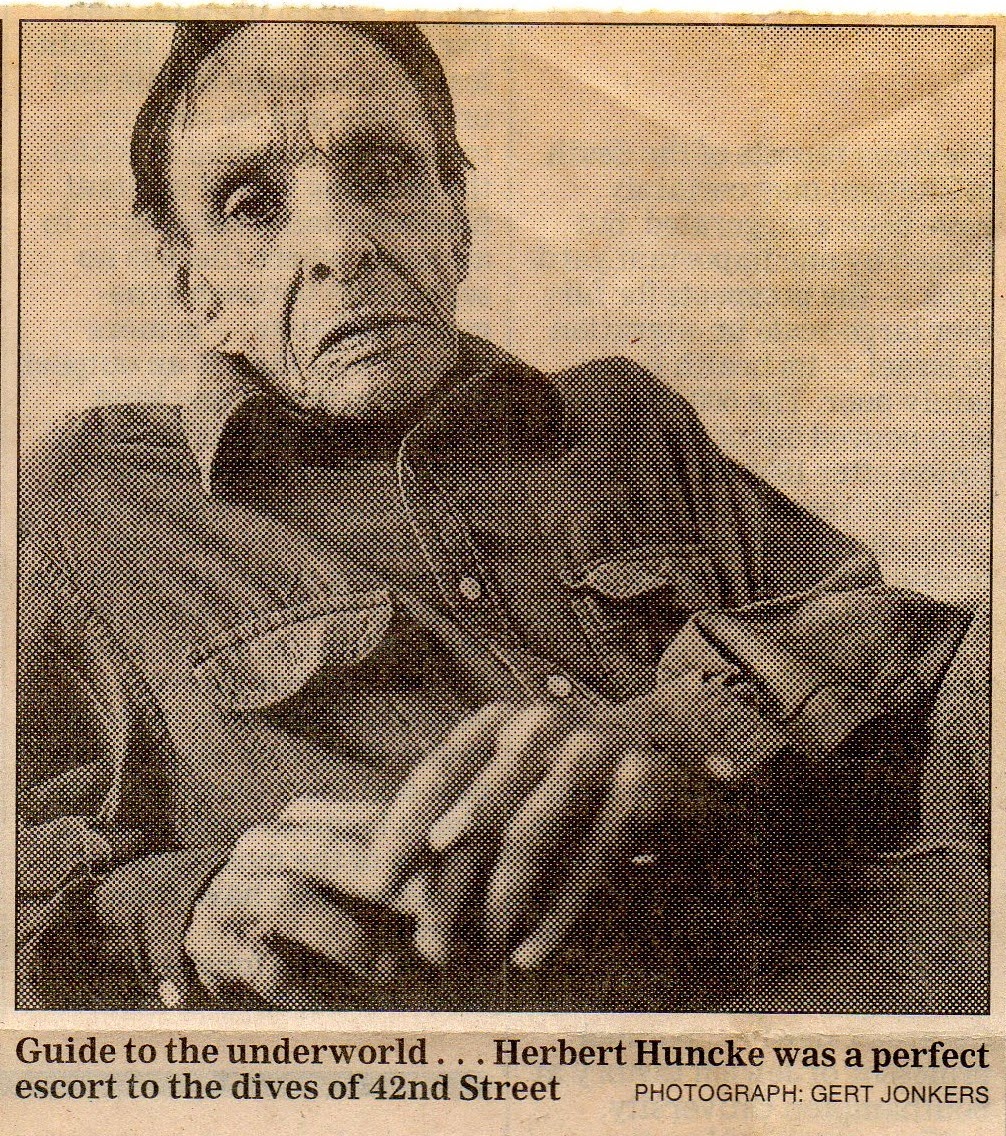 Who cares? A low-life hoodlum, shiftless thief, liar, Rent-Boy, Junkhead, he ‘lived in other people’s apartments all his life’ and ‘seldom got a habit unless someone else paid for it.’ But if the term elegantly wasted still has any currency value, then he embodies it.

J Edgar Hoover once called Beatniks the third greatest threat to the American way of life. And Huncke was the Godfather of Beat. The first hipster. He not only defined its curiously diseased attractions, but gave it its name. If, to William Burroughs ‘Junk is not, like alcohol or weed, a means to increased enjoyment of life. Junk is not a kick. It is a way of life,’ then he learned that ‘Junk Equation’ from Huncke’s Monkey. Allen Ginsberg uses Huncke’s hustler story-telling and Junkie jargon as poem rhythms and source material. And if Burroughs and Ginsberg become totally immersed in Huncke’s subterranean milieu, Jack Kerouac is only slightly more detached. He observes the corrupt romance of its decayed dissolution, and makes Huncke the devious nihilist outlaw of his novels. Even John Clellon Holmes uses Hunke, as ‘Ancke’, in his influential novel ‘Go’ (1952). 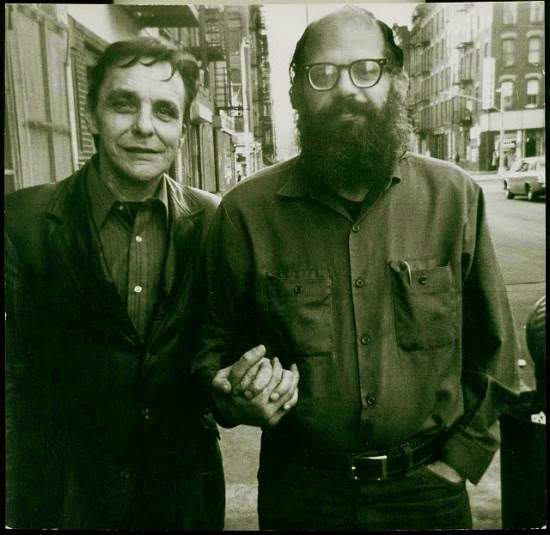 Huncke stays over with Burroughs in the squalor of ‘Naked Lunch’ Algiers, and steals the only thing of value there. A rug. He crashes over with Ginsberg and steals his phonograph. ‘The more anyone has done to help him, the more certain he is to steal from or otherwise take advantage of his benefactor’ Burroughs warns Ginsberg in a letter.

To Burroughs, Huncke is ‘small and very thin, his neck loose in the collar of his shirt. His complexion faded from brown to a mottled yellow... his mouth drawn down at the corners in a grimace of petulant annoyance’ (‘Junkie’). To Kerouac he’s a ‘dark, Arabic-looking man with an oval face and huge blue eyes that were lidded wearily always, with the huge lids of a mask. He moved about with the noiseless glide of an Arab, his expression always weary, indifferent, yet somehow astonished too, aware of everything. He had the look of a man who is sincerely miserable in the world’ (‘The Town And The Country’).

Hunke is a 42nd St Hustler for four years, turning tricks, doing blow-jobs, stealing from cars. Spends six months at sea trying to kick a heroin habit, second cook on a rusting tanker ferrying high-octane gas from New Jersey through the Panama Canal to Hawaii. But making an on-board connection he does the trip ‘in a morphine glow’. Later – January 1946, back in a low-rent New York Rooming House on Henry Street, under the Manhattan Bridge, Burroughs makes his first call. Already lured by fringe-criminal sleaze, and hoping to find an underworld connection to fence a stolen machine gun and some morphine syrettes, his first impression of Huncke is of ‘waves of hostility and suspicion (that) flow out from his large brown eyes like some form of television broadcast.’ Huncke’s paranoia has mistaken Burroughs for an FBI agent! But he’s soon hitting on him for ‘spare change’. Burroughs is fascinated by this cool parasite, and the inept bohemian black comedy growing from their collision is to become a bizarre 1940’s ‘Trainspotting’, soundtracked not by Underworld or Leftfield, but by the fragile beauty of Billie Holiday on a wind-up phonograph, or by the frantic Bebop of all-nite jazz dives. It will revolutionise and reverberate all the way through literary and anti-Lit America, igniting new confusions of incandescent possibility that have yet to be exhausted.

Burroughs – soon an ice-cold hipster in an anonymous suit locked into heroin dependency, introduces Ginsberg and Kerouac to the chemical compound ‘characters of the underworld’. Including Huncke, who not only anti-hero’s in Kerouac’s first novel as ‘Junky’, but gets first Beat Generation use of the word ‘Beat’ in print. A word plucked from Huncke’s real-life speech-patterns. United by (what Ted Morgan calls) links between ‘students and thieves, book-smart and street-smart’, and a mutual interest in recreational pharmacology, they share a 115th Street Crash Pad. The proto-Beats raging euphorically through sexual, narcotic and artistic conundrums, while finding their vocabulary through essential lifestyle-catalysts provided by Huncke, ‘always high on something – weed, benzedrine, or knocked out of his mind on ‘goof-balls’’. 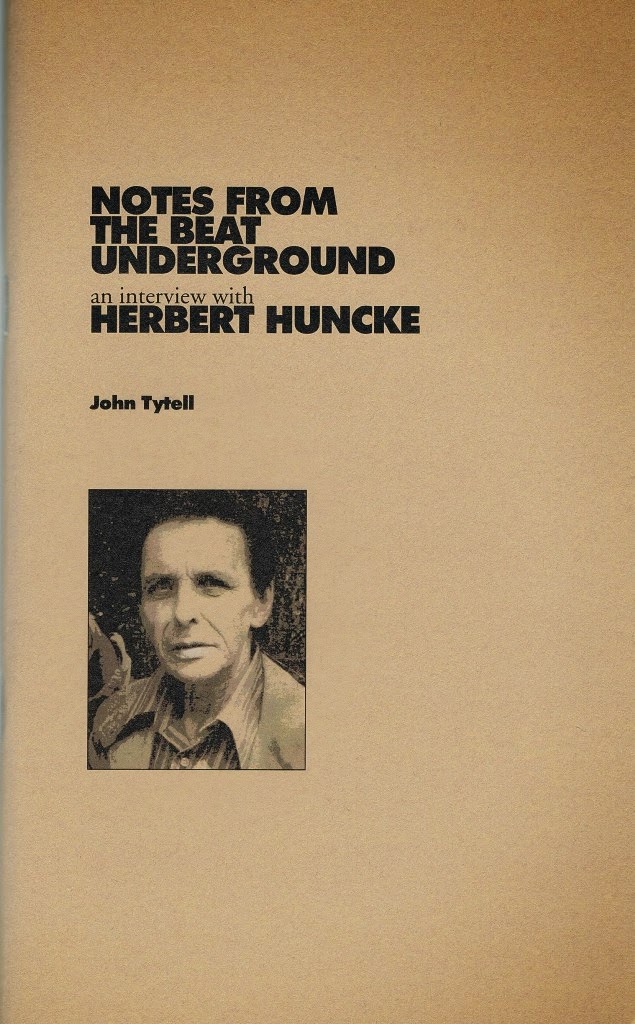 He tour-guides eighteen-year-old Ginsberg around the nomadic floating population of Times Square, the meat-racks and dives where he scores drugs, makes mysterious connections and feeds his cellular needs with petty crime, then the bus terminal where he regularly steals suitcases. To Ginsberg the ‘utter sordidness of my NY’ becomes ‘A Vision Of Apocalypse’. While Kerouac, exploring ‘states of consciousness’ through benzedrine (even its suicidally depressive come-downs providing ‘brooding introspections useful to the writer’), gives Huncke further pivotal roles in the monumental ‘On The Road’ (as Elmo Hassel) and ‘Book Of Dreams’ (as Huck).

A second scene develops as drug busts and Rikers Island ‘cures’ take their toll. Burroughs sets up in New Waverly, a wasted run-down property in Texas where he intends growing marijuana. Huncke joins him, driving regularly into nearby Houston to score for them. Ginsberg and Neal Cassady (Kerouac’s ‘Dean Moriarty’) arrive. Huncke himself recording the ensuing chaos in his ‘The Evening Sky Turned Crimson’ (Cherry Valley Press, 1980), a minor – but sought-after Beat artifact.

Huncke’s own infrequent writing leaks scant and wilfully unreliable details of his own origins. Born in December 1915 in Greenfield Massachusetts he’d always been a deliberate misfit, rejecting the safe dull hypocrisy of a middle-class background to wander the lower depths of the Gay and narcotic underside of America, living on his wits and his sexual talent – ‘my Mother had gone west to California. I had nothing whatsoever to do with my father, and, finally, with my brother. As far as friends were concerned, those that I knew were a dime a dozen. I just didn’t want to be bothered with any of them. I had had one sort-of love affair, so I thought, with a young fellow from the University of Chicago. I had really hurt him, no getting around it, and he certainly didn’t want any more to do with me. I began to realize that I was a pretty insensitive sort of person, that I wasn’t nearly as smart as I thought I’d been, and that there were people doing things in life, and I was doing nothing’ (‘Guilty Of Everything’). 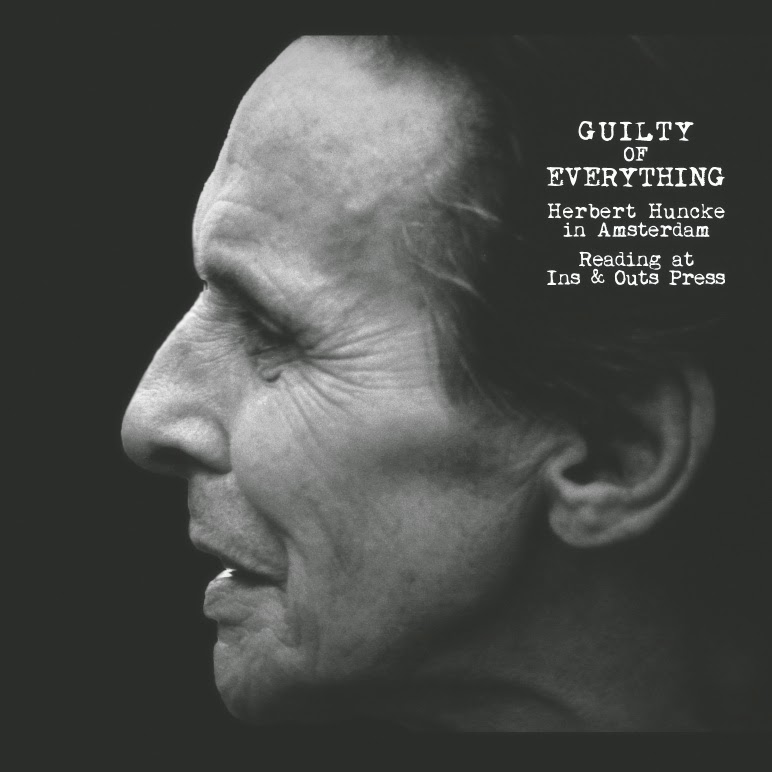 By the time he gravitated to the red-light subworld of New York he was ‘a beautiful kid’ recounts Burroughs’ character Bill Gains, ‘the trouble is, he lost his looks...’ Huncke’s extensive sexual history even attracts the attention of the Kinsey Institute For Research In Sex, Gender & Reproduction, who interview him – and measure his penis (soft and erect!) for the best-selling ‘Kinsey Report On Sexual Behavior In The Human Male’ (1948).

Through the final months of 1946 he’s in Bronx County Jail for possession. Then, released from a further stint on Rikers Island and warned off the Times Square zone by Police, he spends February 1949 wandering homeless, ‘sick dirty and more dead than alive,’ living on Benzedrine, coffee and doughnuts, walking ‘all night with (his) shoes full of blood on the snowbank docks waiting for a door in the East River to open to a room full of steamheat and opium’ as Ginsberg – at who’s door he eventually fetches up, recounts it later in the epochal ‘Howl’.

Ginsberg’s biographer Barry Miles knowingly observes that ‘under Huncke’s veneer of misery and impotence there was a calculating mind that would exploit Allen’s every weakness,’ and Ginsberg’s gullible generosity and sanctuary extends indefinitely. Not only is Hunke now living with Ginsberg in his New York 1401 York Avenue apartment, but he’s using it as a hot goods storage-space for stolen property; cameras, radios, pornographic books, clothes – and even a huge cigarette dispensing machine. The stay-over inevitably results in colourful disaster. Caught inadvertently in a car chase and autowrecked with two of Huncke’s accomplices Ginsberg desperately phones ahead to warn Huncke that the Cops are looking for him, imploring Hunke to ‘clean up the place’. Beat chronicler Ann Charters writing that as the Police arrive Huncke is laconically sweeping the floor oblivious to the mounds of contraband all around him!

Ginsberg gets sent down for psychiatric observation. Huncke gets five-years, emerging from Sing Sing in Fall 1959. By then the seismic publication of ‘Howl’ and ‘On The Road’ have ignited the Beat Generation into notorious celebrity. He recontacts Kerouac for a $25 loan. Kerouac turns him down. But already, to poet/artist Jeff Nuttall, Huncke’s become ‘half-legendary’, a shadowy but vital figure, and as Beat mythology complexifies increasingly into archivist obsession he’s tracked down with greater regularity.

The Beat relationships remain – if slightly more distanced, into the sixties (despite further arrests for methedrine). Ginsberg edits Huncke’s attempted fiction while interest in Beat minutiae gives him a fame by association to writers like Gerald Nicosia researching and publishing Beat histories. Diane Di Prima publishes ‘Huncke’s Journal’ (Poets Press) in 1965, a first collection of his fragmentary stories and prose. It’s followed by ‘Elsie John And Joey Martinez’ (1979) and ‘Guilty Of Everything’ (1991). Then, when Ginsberg organises his ‘Literary History Of The Beat Generation’ celebration at the University of Colorado in Summer 1982 Huncke (rhymes with JUNKIE) is there giving workshops alongside William Burroughs, Michael McClure, Timothy Leary, Greg Corso, Abbie Hoffman, Lawrence Ferlinghetti and the rest.

And then, August 1996, he’s dead. A ghost heroin-pale presence behind the guises of the century’s most hip writers. That’s no small achievement for a lowlife hoodlum, shiftless thief, Rent-Boy and Junkhead. 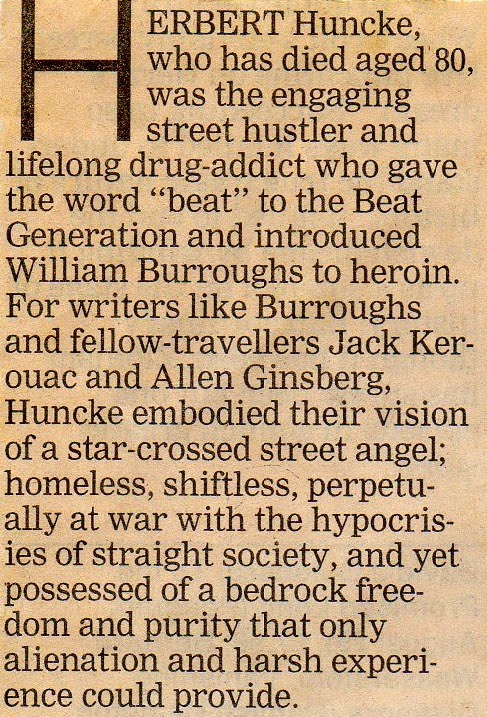 Posted by Andrew Darlington at 17:11

Excellent article! I gathered so much intriguing information and it was a delightful read.

eToro is the #1 forex broker for beginning and pro traders.